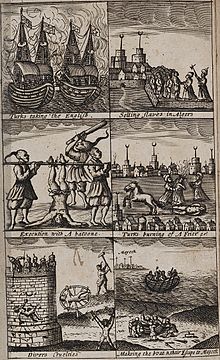 An old poster depicting cruelty, including selling slaves in Algiers, execution, burning, and other cruelties.

Cruelty is indifference to suffering, and even pleasure in inflicting it.[according to whom?] Sadism can also be related to this form of action or concept. Cruel ways of inflicting suffering may involve violence, but affirmative violence is not necessary for an act to be cruel. For example, if a person is drowning and begging for help, and another person is able to help, but merely watches with disinterest or perhaps mischievous amusement, that person is being cruel — rather than violent.

The term cruelty is often used in law and criminology with regard to the treatment of animals, children, spouses, and prisoners.[2] When cruelty to animals is discussed, it often refers to unnecessary suffering. In criminal law, it refers to punishment, torture, victimization, draconian measures, and cruel and unusual punishment.[3][4] In divorce cases, many jurisdictions permit a cause of action for cruel and inhumane treatment.[5]

In law, cruelty is "the infliction of physical or mental distress, especially when considered a determinant in granting a divorce." [6]

Cruelty Free International certifies the Humane Cosmetics, Household Products, Retailer and Purchaser Standards signified by the Leaping Bunny Mark trademark. Cruelty Free International was founded by the BUAV and is dedicated to ending animal testing for consumer products worldwide. In 1963, Beauty Without Cruelty was founded in England by the trustees of BWC Charitable Trust, an animal welfare organization. Its goal was to manufacture and distribute natural, color cosmetics that were NOT tested on animals (as was the norm) and did NOT contain any animal ingredients. In 1989, Beauty Without Cruelty was introduced in the United States. It offers a full line of cruelty-free, vegetarian skin, body, and hair care products made with the finest natural ingredients and aroma-therapeutic essential oils and a full line of colour cosmetics.

The term comes from Middle English, via the Old French term "crualte", which is based on Latin "crudelitas", from "crudelis".[7]