The National Sports Centre at Crystal Palace in south London, England is a large sports centre and athletics stadium. It was opened in 1964 in Crystal Palace Park, close to the site of the former Crystal Palace Exhibition building, and is on the same site as the former FA Cup Final venue which was used here between 1895 and 1914. The ground currently plays home to Kent Invicta Football League side AC London for their maiden season.

It was one of the five National Sports Centres, run on behalf of Sport England, but responsibility was transferred to the London Development Agency (now GLA Land and Property) and is managed by Greenwich Leisure Limited, under their Better brand logo.

The sports centre building was designed by the LCC Architects Department under Sir Leslie Martin between 1953–54 and is a Grade II* listed building.[1] It has a particularly interesting interior: there is a central concourse with a complex and delicate exposed concrete frame supporting the roof, which has a folded teak lining, and to one side a series of pools, including a 50m competition pool, and a diving pool with a dramatic reinforced concrete diving platform, and to the other side a smaller sports arena.

The athletics stadium has a capacity of 15,500, which can be increased to 24,000 with temporary seating. It hosts international athletics meetings.

As the athletics stadium and the aquatics centre have been surpassed in facilities by the Olympic Stadium and the London Aquatics Centre which were built for the 2012 Summer Olympics, it is today usually described by its full name Crystal Palace National Sports Centre.

The current 15,500 seater athletics stadium was built on the site of the football ground by M J Gleeson and opened in 1964.[2] From 1999 to 2012 it hosted the London Grand Prix. The stadium can be expanded to 24,000 with temporary seating if required. With the opening of the London Olympic Stadium in 2012, its future as a stadium hosting athletics events is in doubt. Crystal Palace F.C. has submitted plans to rebuild the stadium as a 40,000 seater football stadium without a running track, but with a new indoor aquatic and sports centre as part of the complex.[3] 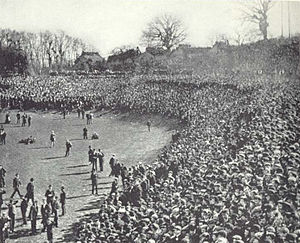 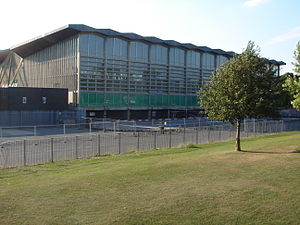 The current athletics stadium is on the same land as a previous football ground,[4] which hosted the FA Cup final from 1895 to 1914 as well as other sports. In 1905, the owners wanted their own football club to play at the venue, so Crystal Palace FC, was formed. They were forced to leave by the military, in 1915, and now play at nearby Selhurst Park, though the Reserve side did play at the NSC in the 2000–01 season. The largest 'domestic' attendance ever at the stadium was in the 1913 Cup final between Aston Villa and Sunderland, when 121,919 spectators squeezed into the stands. The previous world record had been the 1901 Cup Final, when 114,815 amassed to watch Tottenham Hotspur and Sheffield United draw 2–2, (Spurs won the replay at Burnden Park).

For several seasons, Crystal Palace have played several reserve team matches at the centre, most recently in 2001, and in January 2011 the club's owners announced plans to relocate the club back to the site of the NSC, redeveloping it into a 40,000-seater, purpose-built football stadium.[3] Tottenham Hotspur F.C. also released plans to redevelop the NSC into a 25,000-seater stadium, maintaining it as an athletics stadium, as part of their plans to redevelop the Olympic Stadium after the 2012 Summer Olympics and Paralympics.[5] However, Spurs' plans were cancelled due to their failure to obtain the Olympic Stadium, and now the path is clear for Palace to pursue the site.

The following international matches have been played at Crystal Palace:

A panoramic view of the Crystal Palace ground during the 1905 FA Cup Final, the only such photograph of the stadium known to exist

21 teams competed in the twenty FA Cup Finals staged at Crystal Palace, with ten different winners. Four more teams won the FA Cup during this time, after replays at other grounds. All but two of the finalists from that era a century ago are still playing in either the Premier League or the Football League Championship, the exceptions being Bradford City, and Bury. Newcastle United appeared in the most finals at the ground, five, but never lifted the cup there, whilst Aston Villa won all four of their games there.

Results of finals at Crystal Palace 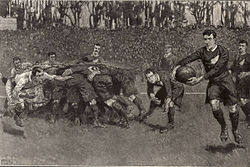 England v New Zealand, 1905, as The Original All Blacks beat the British squad at the Crystal Palace before a then record crowd of 45,000.

On Wednesday 18 August 1965, the ground was the venue of the Rugby league match in which the Commonwealth XIII were defeated 7–15 by New Zealand.[7]

It also played host to Fulham Rugby League in the mid-1980s for a couple of seasons, after they were forced to leave their previous ground of Craven Cottage. 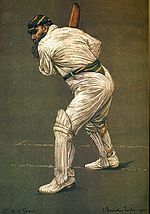 London County Cricket Club was a short-lived cricket club founded by the Crystal Palace Company.[8] In 1898 they invited W. G. Grace to help them form a first-class cricket club. Grace accepted the offer and became the club's secretary, manager and captain. As a result, he severed his connection with Gloucestershire County Cricket Club during the 1899 season. The club played first-class matches from 1900 to 1904.[9][10] Some of the best players of the time played some matches for the club while continuing to play for their usual teams, among them CB Fry, Johnny Douglas and K S Ranjitsinhji. However, the games were little more than exhibition games — and money-making exercises for Dr Grace — and so it quickly lost its first-class status, and with that the ability to attract the top players. It folded in 1908.

The 2,000 capacity indoor Arena at the National Sports Centre was also home to former British Basketball League team's Crystal Palace and London Towers. Crystal Palace eventually merged into the London Towers organisation in 1998, whilst after great success domestically and in European competition the Towers ran into severe financial difficulties and folded its professional team in 2006. During its most successful period, Towers alternated between Crystal Palace and Wembley Arena as its home venues.

For the 2012-2013 season, the London Lions played the home games at Crystal Palace National Sports Centre until they moved to the brand new Copper Box in 2013.

The Sports Arena was used by the London Monarchs, who also played some games at the stadium as England Monarchs before the team became defunct. The Monarchs were a very successful team that competed at the top of their league, prior to their deletion by the NFL – who controlled the franchises.

The main stadium pitch is currently used by the London Olympians and is the home of the Great Britain Lions, the national American football team. The stadium played host to the 2011 Britbowl, the championship game of the British American Football League, which was won by the London Blitz.

The circuit opened in 1927 and the first race, for motorcycles, was on 21 May 1927. The circuit was 1 mile long, and ran on pre-existing paths through the park, including a loop past the lake. The surface had tarmac-covered bends, but the straights only had hard-packed gravel.

Improvements begun in December 1936 increased the circuit to 2 miles, and tarmac-covered the entire length. 20 cars entered the first London Grand Prix on 17 July 1937, a race eventually won by Prince Bira in his ERA R2B Romulus at an average speed of 56.5 mph (91 km/h). Later that year, during the International Imperial Trophy meeting also won by Bira, the BBC broadcast the first ever televised motor racing.

With the outbreak of World War II, the park was taken over by the Ministry of Defence, and it would not be until 1953 that race meetings could take place again. The circuit had been reduced in length to 1.39 miles, bypassing the loop past the lake, and pressure from the local residents reduced motor sport in the park to five days a year. A variety of races took place at the circuit including sports cars, Formula Three, the London Trophy for Formula Two, and even non-championship Formula One races.

The last International meeting was in May 1972, the final lap record going to Mike Hailwood at an average speed of 103.39 mph (166 km/h). The final meeting was held on 23 September 1972, but club events continued until 1974. Although the circuit no longer exists, it can be driven in the Grand Prix Legends historical motor racing simulation, for which it was recreated in detail. It was later converted to several other racing simulation programs. Adjacent to the Olympic swimming pool exists a small race circuit for radio-controlled cars. The site is the home of the London Radio Car Club (LRCC).

The first British Motor Show (then known as the 'London Motor Show', which was one of the first of its kind in the world), was held at Crystal Palace in 1903. Organised by the Society of Motor Manufacturers and Traders (SMMT) it subsequently moved to Olympia for the next 32 years.