The Crystal Palace transmitting station, currently known as Arqiva Crystal Palace, is a broadcasting and telecommunications site in the borough of Bromley, England (grid reference TQ339712).[2]

Its tower is the fifth-tallest structure in London. It is best known as the main television transmitter for the London area, and is owned and operated by Arqiva. 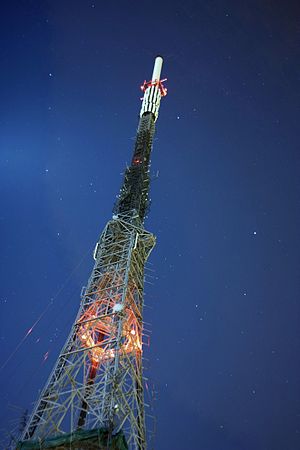 The station was constructed in the mid-1950s among the ruins of the Crystal Palace. The Aquarium on whose site it stands was destroyed in 1941 during the demolition of the Palace's north water tower.[3][4] (John Logie Baird's earlier transmitter and TV studios were a separate development at the other end of the Palace and perished with it in 1936.[5][6]) Its new 219-metre (719 ft)[1] tower was the tallest structure in London until the construction of One Canada Square at Canary Wharf in 1991.

This tower was designed and built for BBC by British Insulated Callender's Construction Co Ltd with steelwork fabrication by Painter Brothers Ltd, Hereford. The tower was required to transmit television programmes with good reception in 1957 and has a total height of 708 feet (216 m). The base of the tower is 120 feet (37 m) to a side and it rises in twelve diminishing panels to a 14.5 feet (4.4 m) square platform at a height of 429 feet (131 m).[7] The tower was constructed using two masts as derricks, one 230 feet (70 m) and the other 125 feet (38 m) high in conjunction with a winch. A 16mm film was produced of the construction by BICC at the time which was available on loan from the BICC Film Library.[8][9]

When built it transmitted BBC Television on the VHF 405-line system; the Croydon transmitter two miles away had been built some months earlier to broadcast ITV. When UHF transmissions started in 1964, first the new BBC2 and later both ITV and BBC1 were transmitted from Crystal Palace. 405-line VHF television was discontinued in 1985, and all television broadcasts from Crystal Palace were on UHF. On 18 July 1986, with the First Night of the Proms on BBC2, the transmitter became the first in the world to transmit stereophonic sound using the NICAM digital sound system. Crystal Palace did not transmit analogue Channel 5: this (alone) came from Croydon. Croydon had reserve transmitters for ITV and Channel 4, used in the event of a fault or maintenance at Crystal Palace. The BBC decided that a complete reserve was also a good idea and all four services became available from Croydon if required.

The station carried the London regions of BBC One, BBC Two, ITV1 and Channel 4 in analogue, each with an effective radiated power of 1 MW, before the digital switchover took place during April 2012, as well as all six digital terrestrial television multiplexes. These had an ERP of 20 kW before switchover and 200 kW after, with considerable beam tilt to the south and east. With digital switchover completed all services come from Crystal Palace again, but because of the site's importance Croydon will be able to duplicate the PSB multiplexes in case of emergency. Although DTT requires far less power to achieve the same coverage as analogue TV, this 17 dB difference is too large to ensure comparable coverage. The station therefore has a range of about 30 miles (50 km) for DTT, compared with about 60 miles (90 km) for analogue.

It is also used for FM radio transmission of local radio stations BBC London 94.9, Radio X, Capital Xtra and Absolute Radio, and a low-powered relay of the four BBC national FM services and Classic FM. It also has medium wave transmitters on 558 kHz (Spectrum Radio), 720 kHz (BBC Radio 4) and 1035 kHz (Kismat Radio). Since the tower is grounded, a wire aerial spun close to it is used for the MW services.

Since 1995, the tower has been one of five London transmitters for the BBC DAB multiplex. This was joined in 1999 by the Digital One DAB service, and a further local DAB multiplex has since started transmitting.

In May 2006 it began broadcasting the first terrestrial HDTV signals in the UK to a trial group of 450 London homes to test HD broadcasts by the BBC, ITV, Channel 4 and Five, to assess the viability and potential problems of future nationwide HD broadcasting. On 2 December 2009, the site entered service as one of the first DVB-T2 transmitters in the world, carrying a variant of the BBC's Multiplex B broadcasting high-definition TV services.

The Government's plans for digital switchover were based on the use of almost all current analogue TV transmitter sites. Crystal Palace remains a key part of the network since analogue was switched off in the London area in April 2012. In July 2007 it was confirmed by Ofcom that Crystal Palace would remain an A group transmitter after DSO (digital switchover). The transmitter is only one of two (the other being the ITV Granada transmitter at Winter Hill) that now solely provides high power ITV and BBC services for the whole of their region, although still supported by the usual network of relays. Between opening in 1974 and January 1982 the main transmitter at Blue Bell Hill broadcast ITV London signals to much of north and central Kent. However reorganisation of franchises saw Blue Bell Hill transferred to a new dual-region of ITV South and South-East and from 1 January 1982 Blue Bell Hill began broadcasting ITV Television South (better known as TVS). Bluebell Hill now transmits ITV Meridian and BBC South East.

On 18 April 2012 a public lighting display was performed from the tower to mark the last day of analogue TV broadcasts from the transmitter.[10][11]

In 1990 the tower was immortalised in the song 'Midnight on The Murder Mile' on the Carter USM album 101 Damnations (album) with the line "I was walking towards the flashing smile, Of the Crystal Palace Tower".

These frequencies were used by Lots Road until Tuesday 25 September 2007.