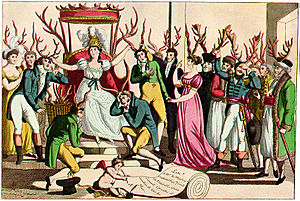 c. 1815 French satire on cuckoldry, which shows both men and women wearing horns

English usage first appears about 1250 in the satirical and polemical poem "The Owl and the Nightingale" (l. 1544). The term was clearly regarded as embarrassingly direct, as evident in John Lydgate's "Fall of Princes" (c. 1440). In the late 14th century, the term also appeared in Geoffrey Chaucer's "The Miller's Tale".[3] Shakespeare's poetry often referred to cuckolds, with several of his characters suspecting they had become one.[3]

One often-overlooked subtlety of the word is that it implies that the husband is deceived, that he is unaware of his wife's unfaithfulness and may not know until the arrival or growth of a child plainly not his (as with cuckoo birds).[3]

The female equivalent cuckquean first appears in English literature in 1562, adding a female suffix to the cuck.

A related word, first appearing in 1520, is wittol, which substitutes wit (in the sense of knowing) for the first part of the word, referring to a man aware of and reconciled to his wife's infidelity.[4]

Cuckoldry as a fetish

Theories in evolutionary biology and psychology

Baker and his proponents' views conflict with the hypothesized foundations for sexual jealousy in evolutionary psychology, which is rooted in the idea that men, specifically, will react jealously to sexual infidelity on the parts of their mates.[16] Infidelity is also the number one cause for divorce.[17]