Cuéllar (Spanish pronunciation: [ˈkweʎar]) is a small Town and Municipality in the Province of Segovia, in the autonomous community of Castile and León, in Spain. It had a population of 9,725 in 2011.

The town is settled on a hill, and it is 60 km north-east of the capital city of Segovia, and 50 km south of Valladolid. It has an extension of 272 km² and it is 857 m above sea level. Flowing though the town are the rivers Cerquilla and Cega. To the north, the town borders the municipality of Bahabón (province of Valladolid); to the south it borders Sanchonuño; to the east is Frumales; and to the west are the municipalities of San Cristóbal de Cuéllar and Vallelado.

Cuéllar has a long-standing agriculture tradition. Specific crops are cereals, vegetables, chicory, legumes, and beet. Specific livestock raised are pigs, sheep and cows. Many years ago, forestry and resin production were important economic resources too. 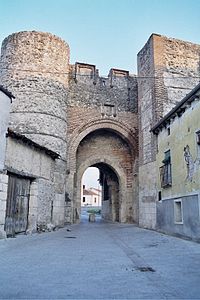 There is some evidence of scattered Iron Age settlements in the upper area, near the castle. Roman settlements have not been discovered in the town.

Professor Ubieto Arteta showed that there is some historical evidence of Cuéllar in the 10th century. Al-Mansur Ibn Abi Aamir (Spanish name: Almanzor) sacked the town and enslaved its population, deporting them to Andalusia. King Alfonso VI of León and Castile rebuilt the town again and brought new settlers at the end of the 11th century. This was the origin of the municipality, ruled by its town council. In 1184, king Alfonso VIII of Castile assembled the parliament in Cuéllar; there, he granted knighthood to several noblemen, amongst whom the Count of Tolosa.

In the 13th century, Cuéllar was one of the most important towns in the north of Spain. The wool trade enriched the local economy. Many palaces and Mudéjar churches were built. In 1256, Alfonso X of Castile granted Cuéllar a Royal Fuero (special law with privileges). Queen María de Molina, Sancho IV of Castile's wife, inherited the town after the death of her husband. The town was a refgue during her troubled regency while future King Ferdinand IV of Castile was a child.

In the middle of the 14th century, King Pedro I 'the Cruel' married doña Juana de Castro in Cuéllar. The marriage was a fraud because the King was divorced from his former wife in an unlawful way, and because he deserted doña Juana after their wedding night.

In 1464, King Henry IV of Castile gave the town as a Lordship to his favorite nobleman, Beltrán de La Cueva, the first Duke of Alburquerque. Since then, the town was bound to this family. His great-grandson was raised to Marquess. 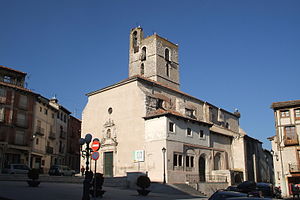 In the 17th century, the town suffered a recession, along with many cities and villages in the country. The monarchy moved to Madrid and settled the court there, so the aristocracy also moved there. Also, it was a period of poverty because of the decadence of the wool trade, the taxes to pay the wars, and the plagues.

In the 18th century, thanks to the laws ruled by Charles III, the town recovered some of its social and economic prosperity.

When Napoleon invaded Spain, the town was looted by the French troops, who stole all the treasuries from the churches, monasteries and the castle.

In 1833, the writer and politician Jose de Espronceda was exiled to Cuéllar because of its liberalism ideology. He wrote the novel Sancho Saldaña o el castellano de Cuéllar when he was living near the church of Santo Tomé.

During the civil war, the town remained part of the country controlled by the nationalist forces so its churches were preserved from the destruction. The castle served as headquarters to the fascist Italian troops, and later as a prison for prisoners. Many years after, the castle was a hospital for consumption patients and a jail for criminals. Now it is a high school and tourism center. Due to the agriculture activities, the people of Cuéllar suffered less troubles after the civil war and did not emigrate as much as other people in the region. 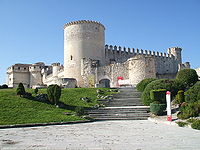 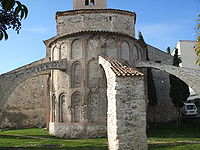 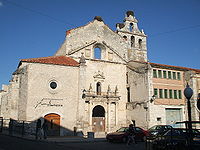 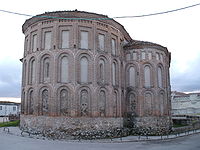