Cuius regio, eius religio is a Latin phrase which literally means "Whose realm, his religion", meaning that the religion of the ruler was to dictate the religion of those ruled. At the Peace of Augsburg of 1555, which ended a period of armed conflict between Roman Catholic and Protestant forces within the Holy Roman Empire, the rulers of the German-speaking states and Charles V, the Emperor, agreed to accept this principle. It was to apply to all the territories of the Empire except for the Ecclesiastical principalities, and some of the cities in those ecclesiastical states, where the question of religion was addressed under the separate principles of Reservatum ecclesiasticum and Declaratio Ferdinandei.

The principle of "cuius regio" gave legitimacy to only two forms of religion within the Empire, Roman Catholicism and Lutheranism, leaving out other Reformed forms of Christianity, such as Calvinism, and radical systems such as Anabaptism. Any other practice of worship beyond the first two named, which were the most widespread in the Empire, was expressly forbidden and considered by the law to be heretical and punishable by death.[1] Although not explicitly intended to allow the modern ideal of "freedom of conscience", individuals who could not subscribe to their ruler's religion were permitted to leave his territory with their possessions.

The Peace of Augsburg generally, and the principle of cuius regio, eius religio specifically, marked the end of the first wave of organized military action between Protestants and Catholics; however, its limitations did not address the emerging trend toward religious pluralism (co-existence within a single territory) developing throughout the German-speaking lands of the Holy Roman Empire. 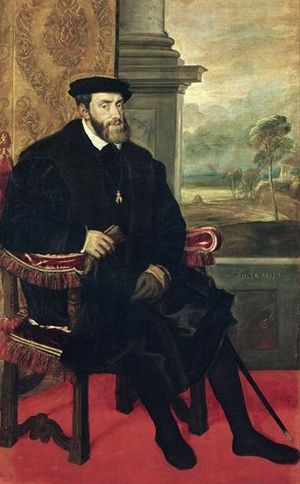 Charles V, Holy Roman Emperor and King of Spain, instructed his brother to settle disputes relating to religion and territory at the Diet of Augsburg in 1555.

Religious divisions in the Empire

For more details on this topic, see German Reformation.

Prior to the 16th century and after the Great Schism, there had been one dominant faith in Western and Central European Christendom, and that was the Roman Catholic faith. Martin Luther's agenda at first called for the reform of the Catholic Church, but was not necessarily a rejection of the faith per se. Later on, Luther's movement broke away from the Catholic Church and formed the Lutheran denomination. Initially dismissed by the Holy Roman Emperor Charles V as an inconsequential argument between monks, the idea of a religious reformation accentuated controversies and problems in many of the territories of the Holy Roman Empire, which became engulfed in the ensuing controversy. The new Protestant theology galvanized social action in the German Peasants' War (1524–1526), which were brutally repressed and the popular political and religious movement crushed. In 1531, fearful of a repetition of similar suppression against themselves, several Lutheran princes formed the Schmalkaldic League, an alliance through which they agreed to protect themselves and each other from territorial encroachment, and which functioned as a political alliance against Catholic princes and armies.[2]

It was broadly understood by princes and Catholic clergy alike that growing institutional abuses within the Catholic Church hindered the practices of the faithful.[3] In 1537, Pope Paul III had called a council to examine the abuses and to suggest and implement reforms. In addition, he instituted several internal reforms. Despite these efforts, and the cooperation of Charles V, rapprochement of the Protestants with Catholicism foundered on different concepts of ecclesiology and the principle of justification.[4] In the same year, the Schmalkaldic League called its own council, and posited several precepts of faith; Luther was present, but too ill to attend the meetings. When the delegates met again, this time in Regensburg in 1540–41, representatives could agree on the doctrine of faith and justification, but not on the number of sacraments, especially whether or not confession/absolution was sacramental, and they differed widely on the definition of "church".[5] Catholic and Lutheran adherents seemed further apart than ever; in only a few towns and cities were Lutherans and Catholics able to live together in even a semblance of harmony. By 1548, political disagreements overlapped with religious issues, making any kind of agreement seem remote.[6]

In 1548 Charles declared an interreligio imperialis (also known as the Augsburg Interim) through which he sought to find some common ground. This effort succeeded in alienating Protestant and Catholic princes and the Curia; even Charles, whose decree it was, was unhappy with the political and diplomatic dimensions of what amounted to half of a religious settlement.[7] The 1551–52 sessions convened by Pope Julius III at the Catholic Council of Trent restated and reaffirmed Catholic teaching and condemned anew what they perceived as Protestant heresies.[8] The Council was an important part in the inter-ecclesiastical reform of the Catholic Church and further advanced the Catholic Reformation.

For more details on this topic, see Peace of Augsburg.

Catholic and Protestant ideology seemed further apart than ever. Charles' interim solution satisfied no one. He ordered a general Diet in Augsburg at which the various states would discuss the religious problem and its solution; (this should not be confused with the Diet of Augsburg in 1530). He himself did not attend, and delegated authority to his brother, Ferdinand, to "act and settle" disputes of territory, religion and local power.[8] At the conference, Ferdinand cajoled, persuaded and threatened the various representatives into agreement on three important principles. Cuius regio, eius religio, Ecclesiastical reservation, and the Declaration of Ferdinand. 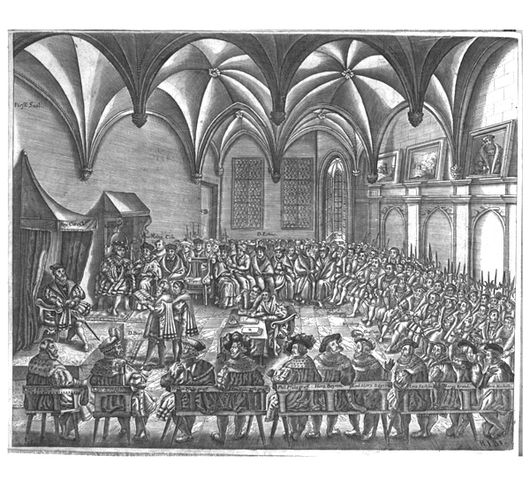 Representatives of the German estates at the Augsburg conference discuss the possibilities of a religious peace.

The principle of Cuius regio, eius religio provided for internal religious unity within a state: The religion of the prince became the religion of the state and all its inhabitants. Those inhabitants who could not conform to the prince's religion were allowed to leave, an innovative idea in the 16th century; this principle was discussed at length by the various delegates, who finally reached agreement on the specifics of its wording after examining the problem and the proposed solution from every possible angle. Cuius regio, eius religio went against earlier Catholic teaching, which held that the kings should faithfully obey the pope. This obedience was thought to produce greater fruits of cooperation and less political infighting and fewer church divisions. The phrase cuius regio, eius religio was coined in 1582 by the legist Joachim Stephani (1544–1623) of the University of Greifswald.[9]

The second principle covered the special status of the ecclesiastical states, called the ecclesiastical reservation, or reservatum ecclesiasticum. If a prince-bishop or prince-abbot changed his religion, he would have to relinquish his rule, allowing the chapter to elect a Catholic successor.

The third principle, known as Ferdinand's declaration, exempted knights and some of the cities in ecclesiastical states from the requirement of religious uniformity, if the reformed religion had been practiced there since the mid-1520s, allowing for a few mixed cities and towns where Catholics and Lutherans had lived together. Ferdinand inserted this at the last minute, on his own authority.[10]

After 1555, the Peace of Augsburg became the legitimating legal document governing the co-existence of Lutheran and Catholic faiths in the German lands of the Holy Roman Empire, and it served to ameliorate many of the tensions between followers of the so-called Old Faith and the followers of Luther. It had two fundamental flaws. First, Ferdinand had rushed the article on ecclesiastical reservation through the debate; it had not undergone the scrutiny and discussion that attended the acceptance of Cuius regio, eius religio. Consequently, its wording did not cover all, or even most, potential legal scenarios. His ad hoc Declaratio Ferdinandei was not debated in plenary session at all; instead, using his authority to "act and settle,"[8] he had added it at the last minute, responding to lobbying by princely families and knights.[11] 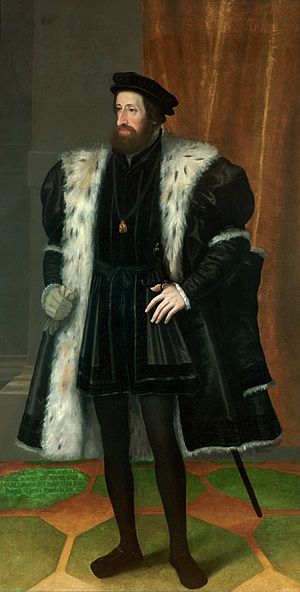 Ferdinand, King of the Romans after 1531 and Holy Roman Emperor (1555–1564). His brother instructed him to settle the disputes at the Augsburg Diet

These specific failings came back to haunt the Empire in subsequent decades. Perhaps the greatest weakness of the Peace of Augsburg was its failure to take into account the growing diversity of religious expression emerging in the so-called evangelical and reformed traditions. By 1555, the reforms proposed by Luther were no longer the only possibilities of religious expression: Anabaptists, such as the Frisian Menno Simons (1492–1559) and his followers, the followers of John Calvin, who were particularly strong in the southwest and the northwest, or those followers of Huldrych Zwingli, were excluded from considerations and protections under the Peace of Augsburg. According to the Religious Peace, their religious beliefs were officially heretical,[12] and would remain so in lands under the direct rule of the House of Habsburg until the Patent of Toleration in 1781.

The ideal of individual religious tolerance on a national level was, however, not addressed: neither the Reformed nor Radical churches (Calvinists and Anabaptists being the prime examples) were protected under the peace (and Anabaptists would reject the principle of cuius regio eius religio in any case). Many Protestant groups living under the rule of a Lutheran prince still found themselves in danger of the charge of heresy. Tolerance was not officially extended to Calvinists until the Peace of Westphalia in 1648, and most Anabaptists eventually relocated to the New World or were exterminated.

Although cuius regio, eius religio gave princes the right to impose their own religion on their subjects, some rulers found it more expedient to tolerate religions that were already in place. For example, Frederick Augustus I, Elector of Saxony converted to Catholicism in 1697 in order to become King of Poland, but the Electorate of Saxony remained officially Protestant. The Elector of Saxony even managed to retain the directorship of the Protestant body in the Reichstag.[13]

John Sigismund, Elector of Brandenburg converted to Calvinism in 1613, but his subjects remained predominantly Lutheran. Brandenburg-Prussia would henceforth be a bi-confessional state in which both Lutheranism and Calvinism were official religions. The Electors of Brandenburg already tolerated Catholicism in Ducal Prussia, which lay outside the borders of the Holy Roman Empire and was held in fief to the King of Poland. They would later acquire other Catholic territories in Poland, but imposed taxes of up to 80% on church revenues.[14]:236 Brandenburg-Prussia also acquired territories in western Germany where Catholicism was the official religion. In 1747, Frederick the Great gave permission for a Catholic cathedral, St. Hedwig's Cathedral, to be built in the predominantly-Lutheran capital city of Berlin.[14]:241

For more details on this topic, see Cologne War.

No agreement was reached on the question of whether Catholic bishops and abbots who became Lutheran should lose their offices and incomes, until the reservatum ecclesiasticum was inserted by imperial decree. The validity of this insertion was contested in a five-year war between the Protestant-convert Archbishop-Elector of Cologne, Gebhard Truchsess von Waldburg, and his Catholic-replacement Ernest of Bavaria, with the latter's victory upholding it.[15]

In 1731, Prince-Archbishop von Firmian of Salzburg decided to compel the practice of Catholicism in his territory. The Prince-Archbishop requested Imperial and Bavarian troops to aid in the suppression of approximately 20,000 Lutherans living in Salzburg.[14] Under the Peace of Westphalia, these dissenting Salzburgers had no right to practice their religion in a Catholic Archbishopric, but they did have the right to migrate to a Protestant state. In February 1732, King Frederick William I of Prussia offered to resettle them in eastern Prussia.[16] Others found their way to Hanover, Holland, and the British colony of Georgia.