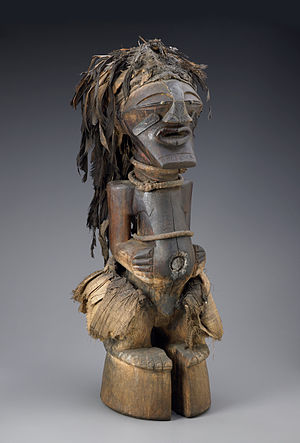 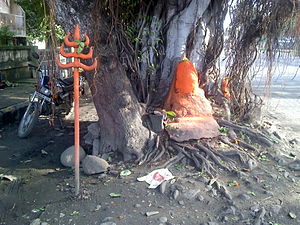 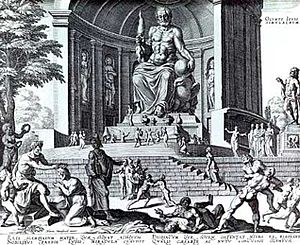 A fanciful reconstruction of Phidias' Statue of Zeus at Olympia, 1572

In the practice of religion, a cult image is a human-made object that is venerated or worshipped for the deity, spirit or daemon that it embodies or represents. Cultus, the outward religious formulas of "cult" (meaning religious practice, as opposed to the pejorative term for a potentially dangerous "new religion"), often centers upon the treatment of cult images, which may be dressed, fed or paraded, etc. Religious images cover a wider range of all types of images made with a religious purpose, subject, or connection.

Idol is a term, almost always pejorative except in Indian English,[1] for a cult image that is itself worshipped,[2] and believed not just to depict or represent a deity or spirit, but in some sense to be one itself. Sometimes the image is believed to have its own powers, to grant wishes or otherwise effect the world.

Cult of images is the practice of worshipping or venerating religious or cult images representing divine figures. Common in a number of ancient religions, the practice continues most prominently today in Hinduism. The Abrahamic religions all specifically ban idols and idolatry; all have had internal divisions and disputes as to what constitutes the proper or improper use of images in religion, and many Abrahamic religious sects use or venerate images with varying degrees of fervor.

In general the belief that an image itself is the object of worship, and itself has or embodies a spirit with inherent powers, tends to be hard to verify when a religious context is examined closely, or to be held at a popular level but denied by the clergy of a religion. Assertions by others outside the religious group concerned that such beliefs are held by the group are however common.

Cult images were a common presence in Ancient Egypt, and still are in modern-day Kemetism. A common example of a cult image in ancient Egypt was the Apis Bull; famously derided in the Book of Exodus. The term is often confined to the relatively small images, typically in gold, that lived in the naos in the inner sanctuary of Egyptian temples dedicated to that god (except when taken on ceremonial outings, say to visit their spouse). These images usually showed the god in their sacred barque or boat; none of them survive.

See also: Statue of Zeus at Olympia and Xoanon

The Parthenon contained a cult image of Athena, the Greek goddess of civilization and the noble side of war. This cult image, known as Athena Parthenos, was created by Phidias, the sculptor and head supervisor of building the Parthenon. This cult image was used for religious sacrifices at this Athenian temple.

In Greek and Roman mythology, a "palladium" was an image of great antiquity on which the safety of a city was said to depend, especially the wooden one that Odysseus and Diomedes stole from the citadel of Troy and which was later taken to Rome by Aeneas. (The Roman story was related in Virgil's Aeneid and other works.) 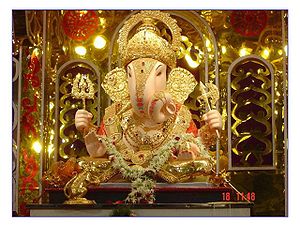 Hinduism allows for many forms of worship[3] and therefore it neither prescribes nor proscribes worship of images (murti). In Hinduism, a murti[4] typically refers to an image that expresses a Divine Spirit (murta). Meaning literally "embodiment", a murti is a representation of a divinity, made usually of stone, wood, or metal, which serves as a means through which a divinity may be worshiped.[5] Hindus consider a murti worthy of serving as a focus of divine worship only after the divine is invoked in it for the purpose of offering worship.[6] The depiction of the divinity must reflect the gestures and proportions outlined in religious tradition.

Their land also is full of idols; they worship the work of their own hands, that which their own fingers have made.

The avoidance of such a degrading paradox was expressed in the early Christian idea of miraculous icons that were not made by human hands, acheiropoietoi. Catholic and Eastern Orthodox Christians make an exception for the veneration of image of saints, which is not considered by them to be adoration or latria. The word idol entered Middle English in the 13th century from Old French idole adapted in Ecclesiastical Latin from the Greek eidolon ("appearance" extended in later usage to "mental image, apparition, phantom"). Greek eidos was employed by Plato and the Platonists to signify perfect immutable "forms".[7]

Towards the end of the pre-Islamic era in the Arabian city of Mecca; an era otherwise known, by the Muslims, as جاهلية, or al-Jahiliyah, the pagan or pre-Islamic, merchants of Mecca controlled the sacred Kaaba, thereby regulating control over it, and, in turn, over the city itself. The local tribes, of the Arabian peninsula, came to this centre of commerce to place their idols in the Kaaba, in the process being charged tithes. Thus helping the Meccan merchants to incur substantial wealth, as well as insuring a fruitful atmosphere for trade and inter-tribal relations in relative peace.

The number and nature of deities in the pre-Islamic mythology are parallel to that of other polytheistic cultures. Some have been official Gods other of a more private character.

Muhammad's preaching incurred the wrath of the pagan merchants, causing them to plot against him. The opposition to his teachings grew so volatile that Muhammad and his followers were forced to flee Mecca to Medina for protection; leading to armed conflict and triggering many battles that were won and lost, which finally culminated in the conquest of Mecca in the year 630. In the aftermath, Muhammad did three things. Firstly, with his companions he visited the Kaaba and literally threw out the idols and destroyed them, thus removing the signs of Jahiliyyah from the Kaaba. Secondly, he ordered the construction of a mosque around the Kaaba, the first Masjid al-Haram after the birth of Islam. Thirdly, in a magnanimous manner, Muhammad pardoned all those who had taken up arms against him. With the destruction of the idols and the construction of the Masjid al-Haram, a new era was ushered in; facilitating the rise of Islam. 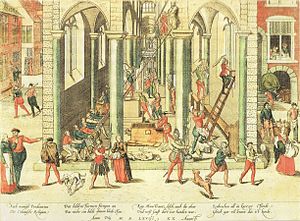 Frans Hogenberg, The Calvinist Iconoclastic Riot of August 20, 1566, in Antwerp, the key moment of the Beeldenstorm in 1566, when paintings and church decorations and fittings were destroyed in several weeks of a violent iconoclastic outbreak in the Low Countries. Several similar episodes occurred during the early Reformation period.

Christian images that are venerated are called icons. Christians who venerate icons make an emphatic distinction between "veneration" and "worship".

The introduction of venerable images in Christianity was highly controversial for centuries, and in Eastern Orthodoxy the controversy lingered until it re-erupted in the Byzantine Iconoclasm of the 8th and 9th centuries. Religious monumental sculpture remained foreign to Orthodoxy. In the West, resistance to idolatry delayed the introduction of sculpted images for centuries until the time of Charlemagne, whose placing of a life-size crucifix in the Palatine Chapel, Aachen was probably a decisive moment, leading to the widespread use of monumental reliefs on churches, and later large statues. The Libri Carolini, a somewhat mis-fired Carolingian counter-blast against imagined Orthodox positions, set out what remains the Catholic position on the veneration of images, giving them a similar but slightly less significant place than in Eastern Orthodoxy. The intensified pathos that informs the poem Stabat Mater takes corporeal form in the realism and sympathy-inducing sense of pain in the typical Western European corpus (the representation of Jesus' crucified body) from the mid-13th century onwards. "The theme of Christ's suffering on the cross was so important in Gothic art that the mid-thirteenth-century statute of the corporations of Paris provided for a guild dedicated to the carving of such images, including ones in ivory".[8]

The 16th-century Reformation engendered spates of venerable image smashing, especially in England, Scotland, Ireland, Germany, Switzerland, the Low Countries (the Beeldenstorm) and France. Destruction of three-dimensional images was normally near-total, especially images of the Virgin Mary and saints, and the iconoclasts ("image-breakers") also smashed representations of holy figures in stained glass windows and other imagery. Further destruction of cult images, anathema to Puritans, occurred during the English Civil War. Less extreme transitions occurred throughout northern Europe in which formerly Catholic churches became Protestant. In these, the corpus (body of Christ) was removed from the crucifix leaving a bare cross and walls were whitewashed of religious images.

Catholic regions of Europe, especially artistic centres like Rome and Antwerp, responded to Reformation iconoclasm with a Counter-Reformation renewal of venerable imagery, though banning some of the more fanciful medieval iconographies. Veneration of the Virgin Mary flourished, in practice and in imagery, and new shrines, such as in Rome's Santa Maria Maggiore, were built for Medieval miraculous icons as part of this trend.

The focus for image veneration or worship among many Jains is an icon of one of the Tirthankara in either a domestic shrine or temple shrine room. There is no belief that the image itself is other than a representation of the being it represents. Jainist doctrine holds that Tirthankaras will not be aware of, and cannot respond to such veneration, but that it can function as a meditative aid. Although most veneration takes the form of prayers, hymns and recitations, the idol is sometimes ritually bathed, and often has offerings of made to it; there are eight kinds of offering representing the eight karmas of Jainism.[9]

This form of reverence is not a central tenet of the faith, and there seems to be debate about the value of this form of worship; it appears to be a relatively late introduction in Jainism.