The Cultural District is a fourteen-square block area in Downtown Pittsburgh, Pennsylvania, USA bordered by the Allegheny River on the north, Tenth Street on the east, Stanwix Street on the west, and Liberty Avenue on the south. 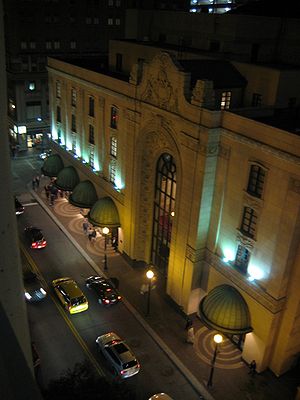 Like many 1920s-era film palaces, Loew's Penn Theatre fell on hard times in the 1960s. Competition from television and suburban theaters along with high maintenance costs put a squeeze on profitability. The theater shut its doors in 1964 and was scheduled for demolition. Henry J. Heinz II and Charles Denby, President of the Pittsburgh Symphony Society, together with the Andrew W. Mellon Foundation, the Allegheny Conference and the Urban Redevelopment Authority of Pittsburgh, purchased the site and rescued the theater for the purpose of creating a new home for the Pittsburgh Symphony.

Jack Heinz and others, including his son, United States Senator from Pennsylvania John Heinz, and William Rea, began the changes that would follow in the district with the purchase and renovation of the former movie palace, Loew's Penn Theater, which was then transformed into the opulent and newly renamed Heinz Hall. This magnificent concert hall reopened after a complete restoration in 1971 as the new home for the Pittsburgh Symphony. The current seating configuration is 2,676. Heinz Hall is owned and operated by the Pittsburgh Symphony Society.

The Stanley Theater becomes The Benedum Center for the Performing Arts 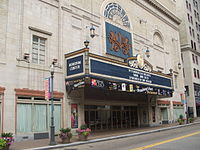 The Trust's first major project was the restoration of another visually stunning former movie palace, the Stanley Theater. The Stanley Theater was designed by the renowned theater architectural firm of Hoffman & Henon and opened on February 27, 1928. At the time, it had the distinction of being the largest theater in Western Pennsylvania, and was commonly known as "Pittsburgh's Palace of Amusement". After a $43 million restoration returning it to its original spendor, it reopened in 1987 as the newly renamed Benedum Center for the Performing Arts, and is currently able to host about 2,885 people. The Benedum Center is owned and operated by the Pittsburgh Cultural Trust. 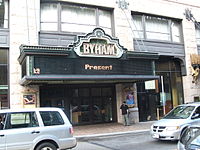 The Cultural District's transformation is widely praised and serves as a model for urban redevelopment through the arts. Brendan Lemon of The New York Times wrote, “To describe Pittsburgh’s unconventional, un-Disneyfied remodeling of its Cultural District... is to explore how theater can help transform urban identity”.

The Cultural District is also home to the Pittsburgh Film Office, a non-profit organization that markets the greater southwestern Pennsylvania region as a great location for movie, television and commercial productions. Since its inception in 1990, the PFO has assisted more than 102 feature films and television productions to southwestern Pennsylvania to generate an economic impact of more than $575 million for the region.[1]

Listing of Theaters in the Cultural District

Visual Arts in the Cultural District