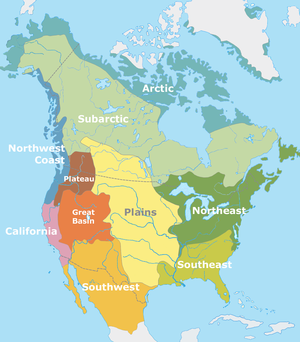 Cultural areas of North American people at the time of European contact.

In anthropology and geography, a cultural region, cultural sphere, cultural area or culture area refers to a geographical area with one relatively homogeneous human activity or complex of activities (culture). These are often associated with an ethnolinguistic group and the territory it inhabits. Specific cultures often do not limit their geographic coverage to the borders of a nation state, or to smaller subdivisions of a state. Cultural "spheres of influence" may also overlap or form concentric structures of macrocultures encompassing smaller local cultures. Different boundaries may also be drawn depending on the particular aspect of interest, such as religion and folklore vs. dress and architecture vs. language.

Cultural areas are not considered equivalent to Kulturkreis (Culture circles).

A culture area is a concept in cultural anthropology, in which a geographic region and time sequence (age area) is characterized by substantially uniform environment and culture.[1] The concept of culture areas was originated by museum curators and ethnologists during the late 1800s as means of arranging exhibits. Clark Wissler and Alfred Kroeber further developed the concept on the premise that they represent long-standing cultural divisions.[2][3][4] The concept is criticized by some, who argue that the basis for classification is arbitrary. But other researchers disagree and the organization of human communities into cultural areas remains a common practice throughout the social sciences.[1] The definition of culture areas is enjoying a resurgence of practical and theoretical interest as social scientists conduct more research on processes of cultural globalization.[5]

In contrast to the abstract cultural homogeneity of a formal culture region, a functional culture region need not be culturally homogeneous; instead, it is an area that has been organized to function politically, socially, or economically as one unit: a city, an independent state, a precinct, a church diocese or parish, a trade area or a farm. Functional culture regions have nodes or central points where the functions are coordinated and directed, such as city halls, national capitols, precinct voting places, parish churches, factories, and banks. In this sense, functional regions also possess a core-periphery configuration, in common with formal culture regions. Many functional regions have clearly defined borders that include all land under the jurisdiction of a particular urban government; clearly delineated on a regional map by a line distinguishing between one jurisdiction and another.

Vernacular or popular or perceptual culture regions are those perceived to exist by their inhabitants, as evidenced by the widespread acceptance and use of a distinctive regional name. Some vernacular regions are based on physical environmental features; others find their basis in economic, political or historical characteristics. Vernacular regions, like most culture regions, generally lack sharp borders, and the inhabitants of any given area may claim residence in more than one such region. It grows out of people’s sense of belonging and identification with a particular region. An American example is "Dixie". They often lack the organization necessary for functional regions, although they may be centered on a single urban node, and they frequently do not display the cultural homogeneity that characterizes formal regions.

Allen Noble gave a summary of the concept development of cultural regions using the terms "cultural hearth" (no origin of this term given), "cultural core" by Donald Meining[6] for Mormon culture published in 1970 and "source area" by Fred Kniffen (1965) and later Henry Glassie (1968) for house and barn types. Outside of a core area he quoted Meinings' use of the terms "domain" (a dominant area) and "sphere" (area influenced but not dominant).[7]

A cultural boundary (also cultural border) in ethnology is a geographical boundary between two identifiable ethnic or ethno-linguistic cultures. A language border is necessarily also a cultural border (language being a significant part of a society's culture), but it can also divide sub-groups of the same ethno-linguistic group along more subtle criteria, such as the Brünig-Napf-Reuss line in German-speaking Switzerland, the Weißwurstäquator in Germany or the Grote rivieren boundary between Dutch and Flemish culture.

In the history of Europe, the major cultural boundaries are found

Macro-cultures on a continental scale are also referred to as "worlds", "spheres" or "civilizations", such as the Muslim world.

In a modern context, a cultural boundary can also be a division between subcultures or classes within a given society, such as blue collar vs. white collar etc.

Examples of regions and spheres

A music area is a cultural area defined according to musical activity, and may or may not conflict with the cultural areas assigned to a given region. The world may be divided into three large music areas, each containing a "cultivated" or classical musics "that are obviously its most complex musical forms," with, nearby, folk styles which interact with the cultivated, and, on the perimeter, primitive styles:[8]

However, he then adds that "the world-wide development of music must have been a unified process in which all peoples participated," and that one finds similar tunes and traits in puzzlingly isolated or separated locations throughout the world.[8]