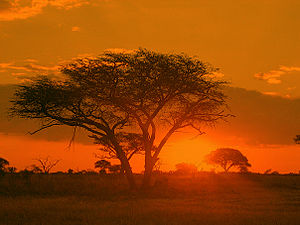 A cultural landscape, as defined by the World Heritage Committee, is the "cultural properties [that] represent the combined works of nature and of man."[1]

The concept of 'cultural landscapes' can be found in the European tradition of landscape painting.[2] From the 16th century onwards, many European artists painted landscapes in favor of people, diminishing the people in their paintings to figures subsumed within broader, regionally specific landscapes.[3]

The word "landscape" itself combines 'land' with a verb of Germanic origin, "scapjan/ schaffen" to mean, literally, 'shaped lands'.[4] Lands were then considered shaped by natural forces, and the unique details of such landshaffen (shaped lands) became themselves the subject of 'landscape' paintings.[3]

The geographer Otto Schlüter is credited with having first formally used “cultural landscape” as an academic term in the early 20th century.[5] In 1908, Schlüter argued that by defining geography as a Landschaftskunde (landscape science) this would give geography a logical subject matter shared by no other discipline.[5][6] He defined two forms of landscape: the Urlandschaft (transl. original landscape) or landscape that existed before major human induced changes and the Kulturlandschaft (transl. 'cultural landscape') a landscape created by human culture. The major task of geography was to trace the changes in these two landscapes.

It was Carl O. Sauer, a human geographer, who was probably the most influential in promoting and developing the idea of cultural landscapes.[7] Sauer was determined to stress the agency of culture as a force in shaping the visible features of the Earth’s surface in delimited areas. Within his definition, the physical environment retains a central significance, as the medium with and through which human cultures act.[8] His classic definition of a 'cultural landscape' reads as follows:

Since Schlüter's first formal use of the term, and Sauer's effective promotion of the idea, the concept of 'cultural landscapes has been variously used, applied, debated, developed and refined within academia, when, in 1992, the World Heritage Committee elected to convene a meeting of the 'specialists' to advise and assist redraft the Committee's Operational Guidelines to include 'cultural landscapes' as an option for heritage listing properties that were neither purely natural nor purely cultural in form (i.e. 'mixed' heritage).[9]

A 2006 academic review of the combined efforts of the World Heritage Committee, multiple specialists around the world, and nations to apply the concept of 'cultural landscapes', observed and concluded that:

"Although the concept of landscape has been unhooked for some time from its original art associations .. there is still a dominant view of landscapes as an inscribed surface, akin to a map or a text, from which cultural meaning and social forms can simply be read."[10]

Within academia, any system of interaction between human activity and natural habitat is regarded as a cultural landscape. In a sense this understanding is broader than the definition applied within UNESCO, including, as it does, almost the whole of the world's occupied surface, plus almost all the uses, ecologies, interactions, practices, beliefs, concepts, and traditions of people living within cultural landscapes.[9]

Some Universities now offer specialist degrees in the study of cultural landscapes, including, for instance, the Universities of Naples, St.-Étienne, and Stuttgart who offer a Master of Cultural Landscapes diploma.

The World Heritage Committee has identified and listed a number of areas or properties as cultural landscapes of universal value to humankind, including the following:[11] 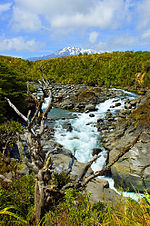 "In 1993 Tongariro National Park, became the first property to be inscribed on the World Heritage List under the revised criteria describing cultural landscapes. The mountains at the heart of the park have cultural and religious significance for the Maori people and symbolize the spiritual links between this community and its environment. The park has active and extinct volcanoes, a diverse range of ecosystems and some spectacular landscapes."

The Batad rice terraces, The Rice Terraces of the Philippine Cordilleras, the first site to be included in the UNESCO World Heritage List cultural landscape category in 1995.[12]

"For 2,000 years, the high rice fields of the Ifugao have followed the contours of the mountains. The fruit of knowledge handed down from one generation to the next, and the expression of sacred traditions and a delicate social balance, they have helped to create a landscape of great beauty that expresses the harmony between humankind and the environment."

"In the 19th century Sintra became the first centre of European Romantic architecture. Ferdinand II turned a ruined monastery into a castle where this new sensitivity was displayed in the use of Gothic, Egyptian, Moorish and Renaissance elements and in the creation of a park blending local and exotic species of trees. Other fine dwellings, built along the same lines in the surrounding serra, created a unique combination of parks and gardens which influenced the development of landscape architecture throughout Europe".

"The Ligurian coast between Cinque Terre and Portovenere is a cultural landscape of great scenic and cultural value. The layout and disposition of the small towns and the shaping of the surrounding landscape, overcoming the disadvantages of a steep, uneven terrain, encapsulate the continuous history of human settlement in this region over the past millennium." 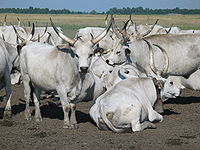 Hortobágy National Park is the largest continuous natural grassland in Europe, which means that it was not formed as a result of deforestation or river control. The first Hungarian national park (established in 1973), it is the country's largest protected area (82 thousand hectares). A significant part of it is Biosphere Reserve and a quarter of its area enjoys international protection under the Ramsar Convention on the conservation of wetlands.[13]

The area exhibits a profusion of distinctive rock landforms rising above the granite shield that covers much of Zimbabwe. The large boulders provide abundant natural shelters and have been associated with human occupation from the early Stone Age right through to early historical times, and intermittently since. They also feature an outstanding collection of rock paintings. The Matopo Hills continue to provide a strong focus for the local community, which still uses shrines and sacred places closely linked to traditional, social and economic activities.

"The 18th- and 19th-century cultural landscape of Dresden Elbe Valley ... features low meadows, and is crowned by the Pillnitz Palace and the centre of Dresden with its numerous monuments and parks from the 16th to 20th centuries. The landscape also features 19th- and 20th-century suburban villas and gardens and valuable natural features."

This landscape was struck from the World Heritage list in 2009, due to the construction of a four lane highway across the Elbe.[14]

The West Lake of Hangzhou World Heritage Site. According to the UNESCO, it reflects "an idealized fusion between humans and nature."[15]

"The West Lake Cultural Landscape of Hangzhou, comprising the West Lake and the hills surrounding its three sides, has inspired famous poets, scholars and artists since the 9th century. It comprises numerous temples, pagodas, pavilions, gardens and ornamental trees, as well as causeways and artificial islands."