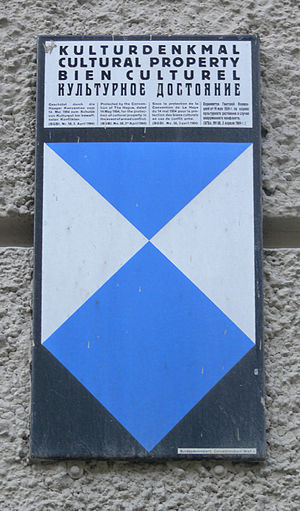 Cultural property are the physical constituents of the cultural heritage of a group or society.

Article 1 of the Hague Convention for the Protection of Cultural Property in the Event of Armed Conflict of 1954 defines cultural property as follows:[1]

"The term 'cultural property' shall cover, irrespective of origin or ownership:
(a) movable or immovable property of great importance to the cultural heritage of every people, such as monuments of architecture, art or history, whether religious or secular; archaeological sites; groups of buildings which, as a whole, are of historical or artistic interest; works of art; manuscripts, books and other objects of artistic, historical or archaeological interest; as well as scientific collections and important collections of books or archives or of reproductions of the property defined above;
(b) buildings whose main and effective purpose is to preserve or exhibit the movable cultural property defined in sub-paragraph (a) such as museums, large libraries and depositories of archives, and refuges intended to shelter, in the event of armed conflict, the movable cultural property defined in sub-paragraph (a);
(c) centers containing a large amount of cultural property as defined in sub-paragraphs (a) and (b), to be known as 'centers containing monuments'."

Article 16 of the Convention describes the internationally recognized mark for cultural property as follows:

(1) The distinctive emblem of the Convention shall take the form of a shield, pointed below, persaltire blue and white (a shield consisting of a royal-blue square, one of the angles of which forms the point of the shield, and of a royal-blue triangle above the square, the space on either side being taken up by a white triangle).