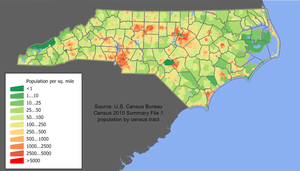 Due to the presence of several dense urban centers in North Carolina, several cities have very distinctive cultures and most have a melting pot of cultures. The Research Triangle Park, also known as RTP, area is chiefly composed of Raleigh, Durham, and Chapel Hill with several other smaller cities contributing as well. Those cities include Carrboro, Morrisvile, Cary and Apex. RTP serves as an anchor for many large businesses in the area, which has the effect of attracting many secondary and supporting businesses. This has created a high concentration of educated and affluent homes in and around RTP. This has created demand for independent, unique, and high quality restaurants and night life in the area as well as a high demand for craft beer.

Despite having several urban centers, these cities are smaller than many more well-known metropolitan areas across the United States. So while these urban centers have many similar amenities to larger cities, the options and variability can be limited. Due to this, there is a very high unmet demand for modern urban amenities and entertainment. This unmet demand has led to nearly constant construction and development in areas such as RTP and Charlotte for several decades. These construction projects include planned subdivisions, restaurants, strip malls, highway expansions, new schools, and business parks.

North Carolina is home to musicians of various styles, including country, bluegrass, folk, punk, hip-hop and garage rock and, it's own indigenous style of R&B Pop, Carolina Beach Music.

North Carolina is home to professional-level sports teams, including basketball, football, and hockey:

NASCAR racing is also a popular sport in North Carolina. Sprint Cup Series races are frequently held at the Charlotte Motor Speedway in Concord, part of the Charlotte Metropolitan Area.