Wales has a distinctive culture including its own language, customs, holidays and music.

Wales is primarily represented by the symbol of the red Welsh Dragon, but other national emblems include the leek and daffodil. The Welsh words for leeks (cennin) and daffodils (cennin Pedr, lit. "(Saint) Peter's Leeks") are closely related and it is likely that one of the symbols came to be used due to a misunderstanding for the other one, though it is less clear which came first.

The patron saint of Wales is Saint David, Dewi Sant in Welsh. St. David's Day is celebrated on 1 March, which some people argue should be designated a public holiday in Wales. Other days which have been proposed for national public commemorations are 16 September (the day on which Owain Glyndŵr's rebellion began) and 11 December (the death of Llywelyn ap Gruffudd).

The traditional seasonal festivals in Wales are:

Wales is often referred to as "the land of song",[1] and is notable for its harpists, male choirs, and solo artists. The principal Welsh festival of music and poetry is the annual National Eisteddfod. The Llangollen International Eisteddfod echoes the National Eisteddfod but provides an opportunity for the singers and musicians of the world to perform. Traditional music and dance in Wales is supported by myriad societies. The Welsh Folk Song Society has published a number of collections of songs and tunes.

Popular bands to have emerged from Wales have included the Beatles-nurtured power pop group Badfinger in the 1960s, Man and Budgie in the 1970s and The Alarm in the 1980s. Wales experienced a strong emergence of groups during the 1990s led by Manic Street Preachers, followed by the likes of the Stereophonics and Feeder; notable during this period were Catatonia, Super Furry Animals, and Gorky's Zygotic Mynci who gained popular success as dual-language artists. Recently successful Welsh bands include Lostprophets, Bullet for My Valentine, Funeral for a Friend and Kids in Glass Houses. The Welsh traditional and folk music scene is in resurgence with performers and bands such as Crasdant, Carreg Lafar, Fernhill, Siân James and The Hennessys.

The emergence of male choirs (sometimes called male voice choirs) in the 19th century has remained a lasting tradition in Wales. Originally these choirs were formed as the tenor and bass sections of chapel choirs, and embraced the popular secular hymns of the day.[7] Many of the historic choirs continue to survive in modern Wales singing a mixture of traditional and popular songs.

Many works of Celtic art have been found in Wales.[8] In the Early Medieval period, the Celtic Christianity of Wales participated in the Insular art of the British Isles and a number of illuminated manuscripts possibly of Welsh origin survive, of which the 8th century Hereford Gospels and Lichfield Gospels are the most notable. The 11th century Ricemarch Psalter (now in Dublin) is certainly Welsh, made in St David's, and shows a late Insular style with unusual Viking influence.

The best of the few Welsh artists of the 16-18th centuries tended to move elsewhere to work, but in the 18th century the dominance of landscape art in English art bought them motives to stay at home, and bought an influx of artists from outside to paint Welsh scenery. The Welsh painter Richard Wilson (1714–1782) is arguably the first major British landscapist, but rather more notable for Italian scenes than Welsh ones, although he did paint several on visits from London.[9] 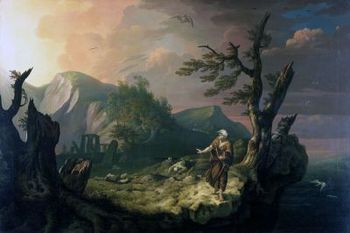 It remained difficult for artists relying on the Welsh market to support themselves until well into the 20th century. An Act of Parliament in 1857 provided for the establishment of a number of art schools throughout the United Kingdom, and the Cardiff School of Art opened in 1865. Graduates still very often had to leave Wales to work, but Betws-y-Coed became a popular centre for artists, and its artist's colony helped form the Royal Cambrian Academy of Art in 1881.[10] The sculptor Sir William Goscombe John made many works for Welsh commissions, although he had settled in London. Christopher Williams, whose subjects were mostly resolutely Welsh, was also based in London. Thomas E. Stephens and Andrew Vicari had very successful careers as portraitists based respectively in the United States and France. Sir Frank Brangwyn was Welsh by origin, but spent little time in Wales.

Perhaps the most famous Welsh painters, Augustus John and his sister Gwen John, mostly lived in London and Paris; however the landscapists Sir Kyffin Williams and Peter Prendergast remained living in Wales for most of their lives, though well in touch with the wider art world. Ceri Richards was very engaged in the Welsh art scene as a teacher in Cardiff, and even after moving to London; he was a figurative painter in international styles including Surrealism. Various artists have moved to Wales, including Eric Gill, the London-born Welshman David Jones, and the sculptor Jonah Jones. The Kardomah Gang was an intellectual circle centred on the poet Dylan Thomas and poet and artist Vernon Watkins in Swansea, which also included the painter Alfred Janes. Today much art is produced in Wales, as elsewhere in a great diversity of styles.

South Wales had several notable potteries in the late 18th and 19th centuries, an early exponent being the Cambrian Pottery (1764–1870, also known as "Swansea pottery") and including Nantgarw Pottery near Cardiff, which was in operation from 1813 to 1822 making fine porcelain, and then utilitarian pottery until 1920. Portmeirion Pottery (from 1961) has never in fact been made in Wales.

Wales is traditionally seen as an agrarian country and the traditional cuisines of Wales represent this heritage. Indeed, traditional foods tend to be simple, utilising readily-available ingredients and those cuts of meat that were not readily saleable.[citation needed] Baking is also a large part of the country's culinary culture and these dishes (such as Bara Brith [speckled bread]) tend to be fruitcakes that will keep for many days and were often served as a workman's tea. Traditional recipes such as cawl (a meat-based stew), Welsh rarebit, laver bread, brithyll abermeurig (Abermeurig trout) and Penclawdd cockles tend to be regional, reflecting the foods available in that region.

Of late, however, there has been a growing trend for many chefs to re-interpret these dishes in a more modern, fusion context.[11] Trout (especially sea trout, sewin) is also used.

The Flag of Saint David.

The largest religion in Wales is Christianity, with almost 72% of the population declaring to be Christian in the 2001 census. The Presbyterian Church of Wales was for many years the largest denomination and was born out of the Welsh Methodist revival in the eighteenth century and seceded from the Church of England in 1811; it had 34,819 members in 2004. The Church in Wales is now the largest with an average Sunday attendance of 41,500 in 2004. It forms part of the Anglican Communion, and was also part of the Church of England, but was disestablished by the British Government under the Welsh Church Act 1914. The Roman Catholic Church makes up the next largest denomination at 3% of the population. Non Christian religions have relatively few followers in Wales, making up less than 2% of the population. Over 26% of the population in Wales did not note a religion in the 2001 census (18.53% stated 'no religion' and 8.07% are noted as 'Religion not stated').[12]

Over fifty national governing bodies regulate and organise their sports in Wales.[13] Most of those involved in competitive sports select, organise and manage individuals or teams to represent their country at international events or fixtures against other countries. Wales is represented at major world sporting events such as the FIFA World Cup, Rugby World Cup and the Commonwealth Games. At the Olympics Games, Welsh athletes compete alongside those of Scotland, England and Northern Ireland as part of a Great Britain team.

Although football has traditionally been the more popular sport in North Wales, rugby union is seen as a symbol of Welsh identity and an expression of national consciousness.[14] The Welsh national rugby union team takes part in the annual Six Nations Championship and has also competed in every Rugby World Cup, hosting the tournament in 1999. The five professional sides that replaced the traditional club sides in major competitions in 2003 were replaced in 2004 by the four regions: Scarlets; Cardiff Blues; Newport Gwent Dragons; and the Ospreys.[15][16] The Welsh regional teams play in the Magners League, the Anglo-Welsh Cup (LV Cup), the European Heineken Cup and the European (Amlin) Challenge Cup.

In international cricket, Wales and England field a single representative team, administered by the England and Wales Cricket Board (ECB), called the England cricket team, or simply 'England'.[19] Occasionally, a separate Wales team play limited-overs competitions. Glamorgan County Cricket Club is the only Welsh participant in the England and Wales County Championship.[20]