Culture of the Native Hawaiians 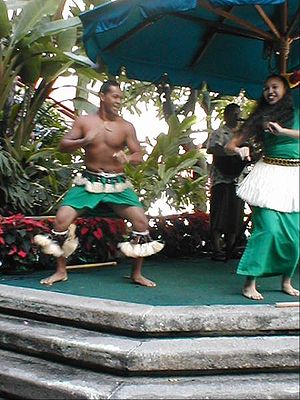 The culture of the Native Hawaiians is about 1500 years old and has its origins in the Polynesians who voyaged to and settled Hawaii. These Native Hawaiians developed culinary, artistic, and religious culture and practices.

Ho'oponopono (ho-o-pono-pono) is a cultural practice of reconciliation and forgiveness, usually combined with prayer. Similar forgiveness practices were performed on islands throughout the South Pacific, including Samoa, Tahiti and New Zealand. It is used in spiritual, emotional, mental, and physical healing practices. Traditional Hawaiian philosophy does not consider the physical and non-physical aspects of the world to be separate, therefore, to heal one aspect, all must be healed. Conversely, healing one will help to heal the rest. For example, if a person has an upset stomach, healing anger toward a sibling may also help to heal the stomach. Modern versions of ho`oponopono may also contain elements of Christian belief and ritual. A session of ho`oponopono is generally guided by a kahuna (traditional priest or healer), kahu (minister), kumu (traditional teacher), or family elder. Sometimes individuals will conduct ho`oponopono on themselves alone.

As Hawaii has become home to many different ethnic groups during the past 200 years, each ethnic group has added elements of its own culture. Today, contemporary culture in Hawaii is a mix of these different cultures and ethnic groups.

Hawaiiana is a popular term of academia used in reference to history and various aspects of the culture of Hawaii, currently a region and state of the United States. The term is used especially in reflection of the periods of antiquity and the Kingdom of Hawaii era. Hawaiiana has become increasingly popular among students of history and sociology throughout the world. The principal repository of Hawaiiana is the Princess Bernice Pauahi Bishop Museum in Honolulu on the island of Oahu. The institution is also called the Hawaii State Museum of Natural and Cultural History and often shares artifacts and information with other institutions globally for the sake of research and study.

The term "Hawaiiana" was coined in 1948 by Hawaiian entertainer and cultural expert, Nona Beamer.[1]

People have claimed that the use of Native Hawaiian culture by other cultures constitutes appropriation. The occupation by Americans caused the traditional luau to change; according to the Deep Green Resistance News Service, modern luaus in Hawaii are more for tourism than in celebration of the culture.[2] Erica Lee and Melissa Gan, writing for The Sheaf, discussed the appropriation of Hawaiian culture by non-Hawaiian students and the stigma that comes from the criticism of appropriation. They criticized the oversimplification of the culture.[3]