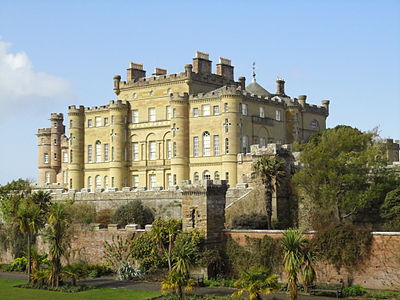 Culzean Castle (/kʌˈleɪn/ kul-LAYN, see yogh; Scots: Cullaincode: sco is deprecated [1]) is a castle near Maybole, Carrick, on the Ayrshire coast of Scotland. It is the former home of the Marquess of Ailsa, the chief of Clan Kennedy, but is now owned by the National Trust for Scotland. The clifftop castle lies within the Culzean Castle Country Park and is opened to the public. Since 1987, an illustration of the castle has featured on the reverse side of five pound notes issued by the Royal Bank of Scotland.[2][3] 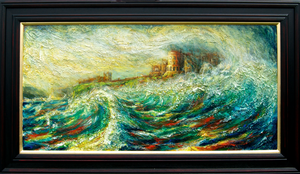 Culzean Castle was constructed as an L-plan castle by order of the 10th Earl of Cassilis. He instructed the architect Robert Adam to rebuild a previous, but more basic, structure into a fine country house to be the seat of his earldom. The castle was built in stages between 1777 and 1792. It incorporates a large drum tower with a circular saloon inside (which overlooks the sea), a grand oval staircase and a suite of well-appointed apartments.

In 1945, the Kennedy family gave the castle and its grounds to the National Trust for Scotland (thus avoiding inheritance tax). In doing so, they stipulated that the apartment at the top of the castle be given to General of the Army Dwight D. Eisenhower in recognition of his role as Supreme Commander of the Allied Forces in Europe during the Second World War. The General first visited Culzean Castle in 1946 and stayed there four times, including once while President of the United States. 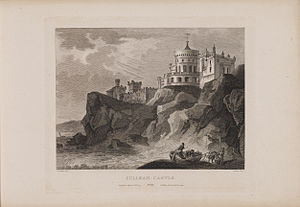 The Ayrshire (Earl of Carrick's Own) Yeomanry, a British Yeomanry cavalry regiment, was formed by The Earl of Cassillis at Culzean Castle in about 1794. On 24 June 1961, the regiment returned to the castle to be presented with its first guidon by General Sir Horatius Murray, KBE, CB, DSO.

The castle re-opened in April 2011 after a refurbishment funded by a gift in the will of American millionaire William Lindsay to the National Trust for Scotland. Lindsay, who had never visited Scotland, requested that a significant portion of his $4 million go towards Culzean.[4] Lindsay was reportedly interested in Eisenhower's holidays at the castle.[5] 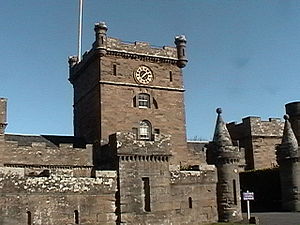 Entrance to the clock tower courtyard

The armoury contains a propellor from a plane flown by Leefe Robinson when he shot down a German Airship north of London in 1916.

To the north of the castle is a bay containing the Gas House, which provided town gas for the castle up until 1940. This group of buildings consists of the Gas Manager's house (now containing an exhibition on William Murdoch), the Retort House and the remains of the gasometer.[7]

There are sea caves beneath the castle which are currently not open generally, but are open for tours throughout the summer.[8]

The castle grounds include a walled garden, which is built on the site of the home of a former slave owned by the Kennedy family, Scipio Kennedy.[9]

The Castle is reputed to be home to at least seven ghosts including a piper and a servant girl.[10][11][12]

Culzean Castle is used as the castle of Lord Summerisle (played by Christopher Lee) in the 1973 cult film The Wicker Man. The scenes here were filmed in February 1972.[13][14]

Culzean Castle was featured in the PBS documentary series Castles of Scotland in 1997.

The Most Haunted team led by Yvette Fielding, Karl Beattie and medium Derek Acorah explored Culzean Castle's paranormal stories and reported sightings of ghosts for an episode of the first series, broadcast on Living TV in 2002.[13][14]

The castle is used for accommodation and wedding ceremonies.