Cumberland County was first settled by a majority of Scots-Irish immigrants who arrived in this area about 1730. English and German settlers constituted about ten percent of the early population. The settlers originally mostly devoted the area to farming and later developed other trades.[4] These settlers built the Middle Spring Presbyterian Church, among the oldest houses of worship in central Pennsylvania, in 1738 near present-day Shippensburg, Pennsylvania.

The United States Army War College is a United States Army school located in Carlisle, Pennsylvania, on the 500 acre (2 km²) campus of the historic Carlisle Barracks, a military post dating back to the 1770s. It caters to high-level military personnel and civilians and prepares them for strategic leadership responsibilities. It is the U. S. Army's most senior military educational institution.

During the Gettysburg campaign of the American Civil War in the summer of 1863, Confederate troops marched through the Cumberland Valley, briefly occupying much of Cumberland County.

Its per capita income is $31,627, making it the wealthiest Pennsylvania county outside greater Philadelphia, and fifth wealthiest overall.

The Republican Party has been dominant in Cumberland County politics since before the American Civil War, with the victories of Robert P. Casey for Governor in 1990 and Bob Casey Jr. for state treasurer in 2004 being among the few times where a statewide Democrat carried the county. The county commissioner majority, all row offices, and all legislative seats serving Cumberland are held by Republicans. 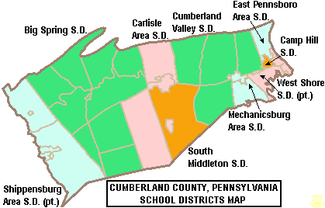 Head Start is a federally and state funded preschool program for low income children. The programs serve 3 and 4 year olds. In order to participate the family income must be below federal poverty guidelines.[17]

PreK Counts is a state funded preschool program for low income and middle class children aged 3–4 years old. Low income children attend for free. Middle class children receive a partial taxpayer funded subsidy, on a sliding scale which maxes out at $66,000. In accepting these grant dollars, the provider agrees to abide by state mandates. PreK Counts is run by the Pennsylvania Office of Early Learning and Child Development.

As reported by the National Center for Educational Statistics[18] 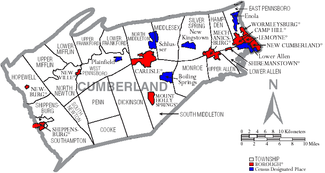 Under Pennsylvania law, there are four types of incorporated municipalities: cities, boroughs, townships, and, in at most two cases, towns. The following boroughs and townships are located in Cumberland County: