From Infogalactic: the planetary knowledge core
Jump to: navigation, search
Not to be confused with Cumberland Mountains, Cumberland Gap, or Cumberland Narrows.
For the similarly-named valley in Tennessee, see Cumberland River.

The Cumberland Valley is a northern constituent valley of the Great Appalachian Valley, within the Atlantic Seaboard watershed in Pennsylvania and Maryland. The Appalachian Trail crosses through the valley.

The valley is bound to the west and north by the Ridge-and-Valley Appalachians (Bear Pond Mountains/Blue Mountain), to the east and south by South Mountain, to the northeast by the Susquehanna River at Harrisburg, and to the south by the Potomac River. The portion of the valley residing in Maryland is sometimes referred to as the Hagerstown Valley. 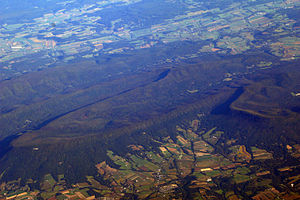 Aerial view of a portion of the Ridge-and-Valley Appalachians forming the northern edge of the Cumberland Valley. Named features in image include Flat Rock, Mount Dempsey, Bloserville, and Bowers Mountain.