Cup Noodle (カップヌードル, Caapu Nūdoru?) is a brand of instant ramen noodle snack manufactured by Nissin, packaged in a foam food container, hard plastic or paper cup. Other brand names are used in specific countries, such as the singular Cup Noodle in Japan, and the product has inspired numerous competitors, such as Maruchan's Instant Lunch.

Instant noodles were invented in 1958 by Momofuku Ando, the Taiwanese-born founder of the Japanese food company Nissin. He used Chikin Ramen (Chicken Ramen) as the first instant ramen noodles.

In 1970, Nissin formed the subsidiary Nissin Foods (USA) Co. Inc, to sell instant noodles in the United States. Nissin recognized that the bowls traditionally used to package instant noodles in Asia were not common in the U.S, so they used the paper cup.

In 1971, they introduced instant ramen packaged in a foam cup. Originally, the product was known as Cup O' Noodles in the United States until 1993.

Today, instant noodles in Japan are often sold in foam bowls, sometimes with plastic utensils. Foam bowls are inexpensive, disposable, light, and easy to hold, since they insulate heat well. 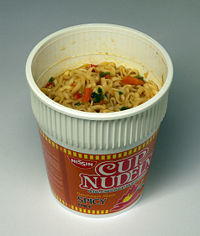 Different flavors are available in other parts of the world, such as tom yum in Thailand, curry in Japan, crab in Hong Kong, Bolognese sauce in Brazil.[2]

From 1996 to 2006, a 60-foot (18 m) Nissin Cup Noodle sign was installed in Times Square, New York City. It was located prominently near the top of the One Times Square building, the location of the Times Square Ball drop on New Year's Eve. The sign was the most recent example in a tradition of steaming signs in Times Square, which started with an A&P 8 O'Clock Coffee cup in 1933.[3]