Curia Julia (Latin: Curia Iulia, Italian: Curia Iulia) is the third named Curia, or Senate House, in the ancient city of Rome. It was built in 44 BC when Julius Caesar replaced Faustus Cornelius Sulla’s reconstructed Curia Cornelia, which itself had replaced the Curia Hostilia. Caesar did this in order to redesign both spaces within the Comitium and Forum Romanum. The alterations within the Comitium reduced the prominence of the senate and cleared the original space. The work, however, was interrupted by Caesar's assassination at the Theatre of Pompey where the Senate had been meeting temporarily while the work was completed. The project was eventually finished by Caesar’s successor Augustus in 29 BC.[1]

The Curia Julia is one of only a handful of Roman structures to survive to the modern day mostly intact, due to its conversion into the basilica of Sant'Adriano al Foro in the 7th century and several later restorations. However the roof, together with the upper elevations of the side walls and rear façade, are modern. These parts date from the remodelling of the deconsecrated church in the 1930s.

There were many curiae during the history of the Roman civilization. Many of them existed at the same time. Curia simply means "Meeting House". While the senate met regularly at the curia within the comitium space, there were many other structures designed for them to meet when the need occurred, such as meeting with someone who was not allowed to enter the sanctified curias of the Senate.

The Curia Julia is the third named curia within the comitium. Each structure was rebuilt a number of times, but originated from a single Etruscan temple built to honor the truce of the Sabine conflict. When this original temple was destroyed Tullus Hostilius rebuilt it and gave it his name. This lasted for a few hundred years until fire again destroyed the curia and the new structure was dedicated to its financial benefactor, Cornelius Sulla. In fact, the structure in the forum today is the second incarnation of Caesar's curia. From 81 to 96 the Curia Julia was restored under Domitian. In 283, this Curia was heavily damaged by a fire, at the time of emperor Carinus.[2] From 284 to 305, the Curia was then rebuilt by Diocletian. It is the remnants of Diocletian's building that stands today. In 412, the Curia was restored again, this time by Urban Prefect Annius Eucharius Epiphanius.

On July 10, 1923 the Italian government acquired the Curia Julia and the adjacent convent of the Church of S. Adriano from the Collegio di Spagna for approximately 16,000 Lire.[3] 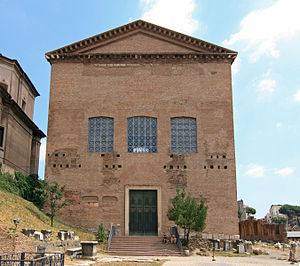 The exterior of the Curia Julia features brick-faced concrete with a huge buttress at each angle. The lower part of the front wall was decorated with slabs of marble. The upper part was covered with stucco imitation of white marble blocks. A single flight of steps leads up the bronze doors. The current bronze doors are modern replicas; the original bronze doors were transferred to the Basilica of St. John Lateran by Pope Alexander VII in 1660.[4]

Interestingly enough, a coin was found within the doors during their transfer.[5] This coin allowed Archaeologists to date repairs made to the Senate House and the addition of the bronze doors to the reign of the Emperor Domitian AD 81-96. The original appearance of the Senate House is known from an Augustan/Octavian denarius of 28BC which shows the veranda held up by columns on the front wall of the building[6]

The interior of the Curia Julia is fairly austere. The hall is 25.20 meters long by 17.61 meters wide. There are three broad steps that could have fitted five rows of chairs, or a total of about three hundred senators.[4] The walls are stripped, but originally were veneered in marble two-thirds of the way up. The two main features of the interior of the Curia Julia are its “Altar of Victory” and its striking floor.

At the far end of the Curia’s hall could be found the “Altar of Victory”.[4] It consisted of a statue of Victoria, the personification of victory, standing on a globe, extending a wreath. This altar was placed in the Curia by Augustus to celebrate Rome’s military prowess, and more specifically his own victory at the Battle of Actium in 31 BC. The altar was removed in the 4th century as part of a general backlash against the pagan traditions of ancient Rome.[7]

The other main feature of the Curia’s interior, the floor, is in contrast to the building's colorless exterior. Featured on the floor is the Roman art technique of opus sectile, in which materials are cut and inlaid into walls and floors in order to make pictures of patterns. It is described by Claridge as “stylized rosettes in squares alternate with opposed pairs of entwined cornucopias in rectangles, all worked in green and red porphyry on backgrounds of Numidian yellow Phrygian purple”.[4] 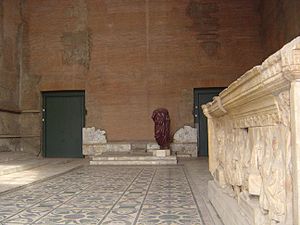 Inside the Curia (or Curia Julia), the restored Senate House (2006).

In his Res Gestae, Augustus writes of the project: “I built the Senate House... with the power of the state entirely in my hands by universal consent, I extinguished the flames of civil wars, and then relinquished my control, transferring the Republic back to the authority of the Senate and the Roman people. For this service I was named Augustus by a decree of the Senate”.[8] In fact, this relinquishment of power was truer in word than in deed; the construction of the Curia Julia coincided with the end of Republican Rome.

In the past, the Curia Hostilia and Comitium “were oriented by the cardinal points of the compass, which may have marked them out as specially augurated space and at any rate set them off obliquely from the Forum rectangle that formed over the centuries”. Breaking with tradition, the Curia Julia was reoriented by Julius Caesar “on more ‘rational’ lines, squaring it up with the rectangular lines of the Forum and even more closely with his new forum, to which the new Senate House formed an architectural appendage more in keeping with the Senate’s increasing subordination”. The reduced power of the Roman Senate during the Imperial Period is reflected by the Curia Julia’s less prominent location and orientation.[9] That is not to say that the two buildings are without similarities. Both the Curia Hostilia’s Tabula Valeria and the Curia Julia’s altar of Victory in the Curia Julia, attest to the enduring preeminence of Rome’s military, despite the changing role of the Senate.