The Curiate Assembly (comitia curiata) was the principal assembly during the first two decades of the Roman Republic. During these first decades, the People of Rome were organized into thirty units called "Curia".[1][2] The Curia were ethnic in nature, and thus were organized on the basis of the early Roman family, or, more specifically, on the basis of the thirty original Patrician (aristocratic) clans.[3] The Curia formed an assembly for legislative, electoral, and judicial purposes. The Curiate Assembly passed laws, elected Consuls (the only elected magistrates at the time),[4] and tried judicial cases. Consuls always presided over the assembly. While Plebeians (commoners) could participate in this assembly, only the Patricians (the Roman aristocrats) could vote.

In the Roman system of direct democracy, one primary types of gatherings were used to vote on legislative, electoral, and judicial matters. The first was the Assembly (comitia, literally "going together" or "meeting place").[5] The Curiate Assembly was a comitia. Assemblies represented all citizens,[6] even if they excluded the plebs like the Curiate Assembly did, and were used for official purposes, such as for the enactment of statutes. Acts of an Assembly applied to all Roman citizens. The second type of gathering was the Council (concilium), which was a forum where a specific class of citizens met. In contrast, the Convention (conventio, literally "coming together") was an unofficial forum for communication. Conventions were simply forums where Romans met for specific unofficial purposes, such as, for example, to hear a political speech.[5] Private citizens who did not hold political office could only speak before a Convention, and not before an Assembly or a Council.[7] Conventions were simply meetings, and no legal or legislative decisions could be made in one. Voters always assembled first into Conventions to hear debates and conduct other business before voting, and then into Assemblies or Councils to actually vote.[8] 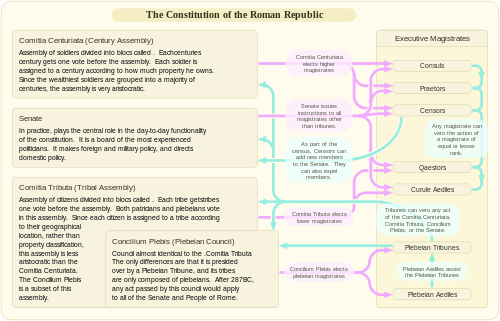 A notice always had to be given several days before the Assembly was to actually vote. For elections, at least three market-days (often more than seventeen actual days) had to pass between the announcement of the election, and the actual election. During this time period (the trinundinum), the candidates interacted with the electorate, and no legislation could be proposed or voted upon. In 98 BC, a statute was passed (the lex Caecilia Didia) which required a similar three market-day interval to pass between the proposal of a statute and the vote on that statute.[9] During criminal trials, the assembly's presiding magistrate had to give a notice (diem dicere) to the accused person on the first day of the investigation (anquisito). At the end of each day, the magistrate had to give another notice to the accused person (diem prodicere), which informed him of the status of the investigation. After the investigation was complete, a three market-day interval had to elapse before a final vote could be taken with respect to conviction or acquittal.[10]

Only one assembly could operate at any given point in time, and any session already underway could be dissolved if a magistrate "called away" (avocare) the electors.[9] In addition to the presiding magistrate, several additional magistrates were often present to act as assistants. They were available to help resolve procedural disputes, and to provide a mechanism through which electors could appeal decisions of the presiding magistrate.[11] There were also religious officials (known as Augurs) either in attendance or on-call, who would be available to help interpret any signs from the gods (omens), since the Romans believed that the gods let their approval or disapproval with proposed actions be known.[11] In addition, a preliminary search for omens (auspices) was conducted by the presiding magistrate the night before any meeting.[12] On several known occasions, presiding magistrates used the claim of unfavorable omens as an excuse to suspend a session that was not going the way they wanted.

On the day of the vote, the electors first assembled into their Conventions for debate and campaigning.[8] In the Conventions, the electors were not sorted into their Curia. Speeches from private citizens were only heard if the issue to be voted upon was a legislative or judicial matter, and even then, only if the citizen received permission from the presiding magistrate.[13] If the purpose of the ultimate vote was for an election, no speeches from private citizens were heard, and instead, the candidates for office used the Convention to campaign.[14] During the Convention, the bill to be voted upon was read to the assembly by an officer known as a "Herald". Then the order of the vote had to be determined. An urn was brought in, and lots were cast to determine the sequence by which the Curia were to vote.[15]

The electors were then told to break up the Convention ("depart to your separate groups", or discedite, quirites). The electors assembled behind a fenced off area[8] and voted by placing a pebble or written ballot into an appropriate jar.[16] The baskets (cistae) that held the votes were watched by specific officers (the custodes), who then counted the ballots, and reported the results to the presiding magistrate. The majority of votes in any Curia decided how that Curia voted. If the process was not complete by nightfall, the electors were dismissed without having reached a decision, and the process had to begin again the next day.[17]

Decline of the Assembly

Shortly after the founding of the republic, the powers of the Curiate Assembly were transferred to the Century Assembly and the Tribal Assembly.[1] While it then fell into disuse, it did retain some theoretical powers, most importantly, the power to ratify elections of the top-ranking Roman Magistrates (Consuls and Praetors) by passing a law (lex curiata de imperio or "Curiate Law on Imperium") that gave them their legal command (Imperium) authority. In practice, however, they actually received this authority from the Century Assembly (which formally elected them), and as such, this functioned as nothing more than a reminder of Rome's regal heritage.[2] Even after it lost its powers, the Curiate Assembly continued to be presided over by Consuls and Praetors, and was subject to obstruction by Roman Magistrates (especially Plebeian Tribunes) and unfavorable omens (as were the other assemblies).[2] Acts that the Curiate Assembly voted on were mostly symbolic and usually in the affirmative.[2] At one point, possibly as early as 218 BC, the Curiate Assembly's thirty Curia were abolished, and replaced with thirty lictors, one from each of the original Patrician clans.[2]

Since the Curia had always been organized on the basis of the Roman family,[3] it actually retained jurisdiction over clan matters even after the fall of the Roman Republic in 27 BC.[4] Under the presidency of the Pontifex Maximus,[1] it witnessed wills and ratified adoptions,[1] inaugurated certain priests, and transfer citizens from Patrician class to Plebeian class (or vice versa). In 59 BC, it transferred Publius Clodius Pulcher from Patrician status to Plebeian status so that he could run for Plebeian Tribune. In 44 BC, it ratified the will of Julius Caesar, and with it Caesar's adoption of his nephew Gaius Octavian (the future Roman Emperor Augustus) as his son and heir.[2]