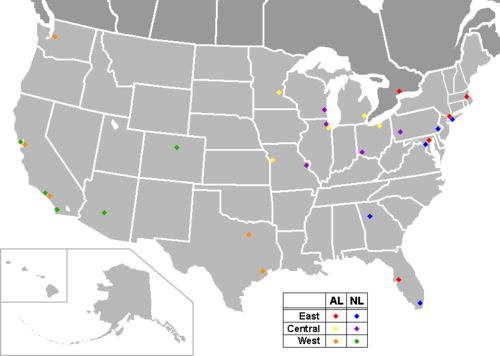 Former Commissioner of baseball, Bud Selig, often floated the idea of international expansion and realignment of the major leagues. At the moment, however, the two major leagues are each split into three divisions.

In all, there are 30 teams in the two leagues: 15 in the older National League ("NL") and 15 in the American League ("AL"). Each has its teams split into three divisions grouped generally by geography. They are (number of teams in each division in parenthesis): NL East (5), NL Central (5), NL West (5), AL East (5), AL Central (5), and AL West (5). From 1998 to 2012, there were 16 teams in the National League, and 14 teams in the American League. This changed in the 2013 season when the Houston Astros were moved to the AL West, placing 5 teams in each division and 15 teams in both leagues.[1] The teams are hosted by 17 American states, 1 Canadian province (Ontario), and the District of Columbia.

Each team's regular season consists of 162 games, a duration established in 1961 in the American League and 1962 in the National League. From 1904 into the early 1960s, except for 1919, a 154-game schedule was played in both leagues (in which each team played its seven opponents 22 times apiece). Expansion from eight to ten teams in each league in the early 1960s resulted in a revised schedule of 162 games (in which each team played its nine opponents 18 times) in their expansion years, for the American League in 1961 and the National League in 1962. Although the schedule remains at 162 games to this day, the layout of games played was changed when Divisional play began in 1969, so that teams played more games against opponents within their own division than against the other divisions or (beginning in 1997) the other league.

For a detailed history of the length of the regular season, see Major League Baseball schedule.

The Major League regular season schedule generally runs from the first Sunday in April to the last Sunday in September or the first Sunday in October. Each team is scheduled to play 162 games during the season. Games are scheduled every day (except as noted in the next paragraph), although not all teams play every day; by rule, each team has a scheduled day off at least once every two weeks (though it usually occurs about once a week). Players and teams prepare for the season in spring training, in Florida or Arizona, during February and March. Four rounds of playoffs follow the regular season, culminating in the World Series in late October. The Major League postseason consist of multiple game series that are split between the two teams' home fields; predetermined sites are not used as they are in some other professional sports championships.

An annual "All-Star Game" is conducted halfway through the season, at a pre-determined site, with all teams enjoying a three-day break. National League players make up one team, while American League players form the other. Eight players from each league (one for each field position other than pitcher) are selected by fan vote, while the remainder are selected by the selected managers of the two League teams (which are the managers of the previous year's World Series teams).

Games are played predominantly against teams within each league through an unbalanced schedule that heavily favors intra-divisional play. In 1997, Major League Baseball introduced interleague play, in which American and National League teams play against one another. This break from tradition (previously, the two leagues played completely separate schedules except for the All-Star Game and World Series) was criticized by the sport's purists but has since proven very lucrative to the franchises.[citation needed] The interleague games were confined to the months of May and June. Beginning in 2013, interleague play will occur throughout the season. Typically many intra-division games are scheduled toward the end of the season, anticipating the possibility of close divisional races and heightened fan interest.

Generally, when two teams meet, they play a "series" of three games against each other, although they will occasionally play two- and four-game series as well. In the unbalanced schedule currently in use, most teams will travel to visit each other team in their division three times per season, each team in their league's other divisions once per season, and make three visits to teams from the opposite league, totaling 81 games. The remaining 81 games are conducted at home, with other teams visiting on a similar schedule. When games must be rescheduled due to weather or other concerns, it is common for the game to be rescheduled as part of a "double-header", in which two games featuring the same two teams are played back-to-back on the same day.

Most games begin at either 1:05 pm or 7:05 pm local time, although some teams prefer other times, and individual games may be scheduled at other times for a variety of reasons (often relating to being featured on nationwide television). When not over-ridden due to broadcast contracts, the game time is ultimately set by the home team. Most teams choose to play primarily at night for attendance purposes, though they will often play in the afternoon on Sundays and "Get-Away Days" (days where one or both teams must travel to another city following the game). However, the Chicago Cubs, by agreement with the City of Chicago, are required to play almost two-thirds of their home games during the day. (The Cubs' stadium, Wrigley Field, was also the last stadium to operate without lights, which were installed in 1988. Prior to the 1988 season, all Cubs home games were played in daylight.)

Each year in June, Major League Baseball conducts a draft for first-year players who have never signed a Major or Minor League contract. These players are generally American high school graduates or college students, although players from a limited number of foreign countries may also be drafted. Notably, players from Japan may not be drafted, it being regarded as the exclusive right of the Japanese leagues to do so.

After being drafted, players are assigned to minor league teams who are affiliated with the major league team. The minor leagues are organized into several levels, and players normally work their way up over a period of three or more seasons (based on skill and performance) before appearing in the Major Leagues.

In American professional sports (and usually amateur sports as well), a generally standardized and marketing-oriented structure has evolved for the names and colors, and thus the identities of individual clubs. The structure involves three elements: a geographical designator, traditionally the name of the team's city, although in recent decades the team's state or region has sometimes been used; a nickname, usually connected with either a mascot, the team's colors, or a feature unique to the region or to the club; and team colors, a carryover from heraldry. This approach contrasts with some non-American sports, such as European soccer, in which team names need not necessarily follow a particular pattern, or Asian professional baseball, which generally follows a "corporate sponsor" name followed by a "nickname". The pattern began with early organized baseball clubs and has been extended from there to almost all U.S. professional clubs.

The Cincinnati Red Stockings started a new trend in baseball club names. The team was named after the color of its socks. Because of a combination of factors—including cost and quality of fabric dyes and perception of toxicity—very little color was used on early baseball uniforms. The one piece of the uniform that was commonly colored was the stirrup stocking, which was worn over a white sock (known as a "sanitary"), which prevented direct contact between the wearer's skin and the dyed stocking. The Red Stockings, which became a national sensation with their successful barnstorming in 1869 and 1870, popularized the naming of the team after its one most distinguishing uniform feature, the color of its socks.

By 1876, when the National League entered play, baseball clubs were no longer primarily associated with gentlemen's athletic clubs, and most of the original teams were popularly named after the one uniform feature that served to distinguish them on the field—the color of their stockings. Thus: Boston Red Stockings, Chicago White Stockings, Cincinnati Red Stockings, Hartford Dark Blues, Louisville Grays, St. Louis Brown Stockings. The 1876 New York and Philadelphia clubs still held over the traditional "Mutual" and "Athletic" names, and were usually so referenced in the standings. The plural usage seen sometimes, "Mutuals" or "Athletics", was equivalent to the "Chicagos" or the "Bostons". Modern historians have often retrofitted these names in the modern style, such as "New York Mutuals", which is historically inaccurate. "Mutual" was the actual name of the team, and the club had separate "nicknames" that referred to the team colors in a given year, such as "Green Stockings". The Athletics name did persist, however, and the Philadelphia American League team would retain this name even through two relocations.

Throughout this period, club nicknames were ad hoc, bestowed and used at will by sportswriters and fans, for example, the Lord Baltimore Club could be called the "Baltimores", the "Canaries", or the "Yellow Stockings." Nicknames became associated with particular cities, and fans tended to refer to the local team by this name, even if it was not associated in a corporate fashion with its predecessor. Thus, multiple, unassociated teams used names such as Boston Red Stockings, Chicago White Stockings, Cincinnati Red Stockings, St. Louis Brown Stockings, Louisville Grays, Baltimore Orioles, Milwaukee Brewers, and the like.

Early in the 20th century, the club nickname began to acquire a more important status, eventually an official status, being designated by the club ownership and ultimately used as part of the club's marketing efforts. Sometimes a club would change its nickname or adopt an official name that superseded one or more unofficial names in the past. An example would be the Boston Braves, who were tagged with various nicknames prior to officially adopting "Braves" as their name and mascot. Sometimes such a name change did not catch on with the press and public, which is why there is no longer a "Philadelphia Blue Jays" nor a "Boston Bees". The original Washington Senators were officially the "Washington Nationals" for many decades, but the alternate nickname "Senators" persisted, "Nationals" faded, and the team finally, officially became the "Senators" in the late 1950s. (With modern marketing strategies, such a fate is less likely to befall the current Washington Nationals.)

In contrast, the Brooklyn Dodgers began by adopting the old "Atlantic" designation, then were dubbed the "Bridegrooms" for a while, then the "Trolley Dodgers", then the "Superbas", then the "Robins" (for their manager, Wilbert Robinson), although the alternate nickname "Dodgers" persisted from the moment the team acquired that tag. The Dodgers did not actually put that name on their uniforms until the 1930s. Sometimes teams have changed their nicknames for marketing or other reasons. For example, the Houston Colt 45s became the Houston Astros in 1965 after moving into the new Astrodome.

Team colors are sometimes tied in with a team's name, and occasionally they are changed for marketing reasons. One of the most striking examples of the latter was in 1963, when flamboyant owner Charles O. Finley changed the Kansas City Athletics' uniforms from a traditional white/gray with blue and red trim to bright yellow with green trim, a move that sparked controversy, but also one that fit in with the new medium of color television. Before this, home uniforms in MLB were uniformly white with colored trim, while road uniforms were uniformly gray; afterwards many teams displayed a variety of color schemes, notably the Houston Astros and San Diego Padres.

The Chicago Cubs have occasionally worn a bright blue top on the road since 1982, whereas the Chicago White Sox have changed colors many times during that interval, at one or another time wearing navy blue, red, royal blue, and white stockings. In recent years the team has sometimes worn black hosiery.