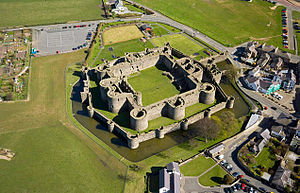 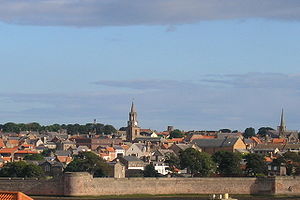 A curtain wall is defensive wall between two towers (bastions) of a castle, fortress,[1] or town.[2]

In medieval castles, the area surrounded by a curtain wall, with or without towers, is known as the bailey.[3] The outermost walls with their integrated bastions and wall towers together make up the enceinte or main defensive line enclosing the site.

In earlier designs of castle and town, the curtain walls were often built to a considerable height and were fronted by a ditch or moat to make assault difficult.

Later, with the introduction of trace italienne fortifications, the height of the curtain walls was reduced, and beyond the ditch, additional outworks such as ravelins and tenailles were added to protect the curtain walls from direct cannonading. 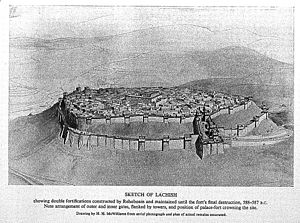 Evidence for curtain walls or a series of walls surrounding a town or fortress can be found in the historical sources from Assyria and Egypt. Some notable examples are ancient Lachish and Buhen.