The Curtis Publishing Company, founded in 1891 in Philadelphia, Pennsylvania, became one of the largest and most influential publishers in the United States during the early 20th century. The company's publications included the Ladies' Home Journal and The Saturday Evening Post, The American Home, Holiday, Jack & Jill, and Country Gentleman. In the 1940s, Curtis also had a comic book imprint, Novelty Press. 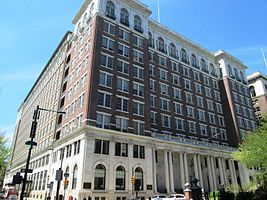 The Curtis Center, built in 1910 and designed by Edgar Seeler in the Beaux Arts style

The Curtis Publishing Company was founded in 1891 by publisher Cyrus H. K. Curtis, who published the People's Ledger, a news magazine he had begun in Boston in 1872 and moved to Philadelphia in 1876. He had also established the Tribune and Farmer in 1879, from the women's section of which he fashioned the Ladies' Home Journal under the editorship of his wife, Louisa Knapp, in 1883. These publications were taken under the imprimatur of the new company. In 1897, Curtis spent $1,000 to buy Saturday Evening Post, which would become one of the nation's most popular periodicals, known for its timely articles and stories and frequent cover illustrations by Norman Rockwell.

The advent of television in the late 1940s and early 1950s eroded the popularity of general-interest periodicals like the Post and the Journal, and in March, 1962, Curtis Publishing's president Robert A. MacNeal announced that the company had lost money for the first time since its incorporation more than seven decades before.[1] Perfect Film loaned the company $5 million in 1968 at the request of Curtis's primary loan holder, First National Bank of Boston, to extend its loans. Curtis sold its Philadelphia headquarters to real estate developer John W. Merriam for $7.3 million to pay off most of the First National loan; it then leased half of the building back.[2]

In 1968, Curtis Publishing sold the Ladies' Home Journal and The American Home to Downe Communications for $5.4 million in stock,[3][4] and then sold the stock for cash to operate with. Six million Post subscribers were then sold to Life for cash, a $2.5 million loan and a contract with Curtis' circulation and printing services subsidiaries. Despite these attempts to revive the Saturday Evening Post, and with no purchaser for the magazine, Curtis Publishing shut down the magazine in 1969.[5] In March 1969, the Federal Trade Commission directs Curtis to offer cash refunds for unfulfilled portions of Post subscriptions.[6] Perfect Film purchased Curtis Circulation Company that same year.[5] In 1976, The Saturday Evening Post Society was spun off from Curtis to publish its flagship magazine and U.S. Kids was formed which publishes their portfolio of children's magazines.[7]

In 1910 the company built its headquarters building at the intersection of South Sixth and Walnut Streets about 200 feet (61 m) southwest of Independence Hall. The building was designed by Edgar Viguers Seeler (1867-1929) in the Beaux Arts style. The square-block building stretches from South Sixth to South Seventh Street east to west and from Sansom Street to Walnut Street north to south. The building was renovated in 1990 by Oldham and Seltz and John Milner Associates.[8][9]

The interior of the building features a terraced waterfall and fountain, an atrium with faux-Egyptian palm trees, and the 15-by-49-foot (4.6 m × 14.9 m) glass-mosaic Dream Garden (1916) designed by Maxfield Parrish and made by Louis Tiffany and Tiffany Studios.[9] The work was commissioned by Edward Bok, who was the Senior Editor of the company at the time, and was exhibited at Tiffany Studios in New York City for a month before being installed in the building's lobby, which took six months. The mosaic required 100,000 pieces of hand-fixed favrile glass in 260 different colors.[10]

In 1998, the mosaic was sold to casino owner Steve Wynn, who intended to move it to one of his casinos in Las Vegas. This was blocked by local historians and art lovers who raised $3.5 million to prevent the move.[11] The money was provided by the Pew Charitable Trusts to the Pennsylvania Academy of the Fine Arts, which now owns the work.[10]