Custodian of the Two Holy Mosques 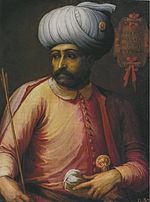 Custodian of the Two Holy Mosques (Arabic: خادم الحرمين الشريفين‎‎ Ḫādim al-Ḥaramayn aš-Šarīfayn), sometimes translated as Servant of the Two Noble Sanctuaries or Protector of the Two Holy Cities, is a royal style that has been used by many Islamic rulers including the Ayyubids, the Mamluk Sultans of Egypt, the Ottoman Sultans, and the modern Saudi kings.[1] The title refers to the monarch taking the responsibility of guarding and maintaining the two holiest mosques in Islam, Al-Masjid al-Haram (the Sacred Mosque) in Mecca and Al-Masjid an-Nabawi (the Prophet's Mosque) in Medina.[1][2]

The first person to hold the title was Saladin.[citation needed]

After defeating the Mamluks and gaining control of Mecca and Medina in 1517, the Ottoman sultan Selim I adopted the title. It was used by all subsequent sultans until Mehmed VI, the last.

The first Saudi king to assume the title was Fahd bin Abdul Aziz in 1986.[1] King Fahd replaced the term "His Majesty" with "Custodian of the Two Holy Mosques". The reigning king, Salman bin Abdulaziz Al Saud, took the same title after the death of King Abdullah, his half brother, on 23 January 2015.[2]