Vice Admiral Cuthbert Collingwood, 1st Baron Collingwood (26 September 1748 – 7 March 1810) was an admiral of the Royal Navy, notable as a partner with Lord Nelson in several of the British victories of the Napoleonic Wars, and frequently as Nelson's successor in commands.[1]

Collingwood was born in Newcastle upon Tyne. His early education was at the Royal Grammar School, Newcastle. At the age of twelve, he went to sea as a volunteer on board the frigate HMS Shannon under the command of his cousin Captain (later Admiral) Richard Brathwaite (or Braithwaite), who took charge of his nautical education. After several years of service under Captain Brathwaite and a short period attached to HMS Lenox, a guardship at Portsmouth commanded by Captain (later Admiral) Robert Roddam, Collingwood sailed to Boston in 1774 with Admiral Samuel Graves on board HMS Preston, where he fought in the British naval brigade at the battle of Bunker Hill (June 1775), and was afterwards commissioned as a Lieutenant (17 June 1775).

In 1777, Collingwood first met Nelson when both served in HMS Lowestoffe. Two years later, Collingwood succeeded Nelson as Commander (20 June 1779) of HMS Badger, and the next year he again succeeded Nelson as Post-Captain (22 March 1780) of HMS Hinchinbrook, a small frigate. Nelson had been the captain of a failed expedition to cross Central America from the Atlantic Ocean to the Pacific Ocean by navigating boats along the San Juan River, Lake Nicaragua and Lake Leon. Nelson was debilitated by disease and had to recover before being promoted to a larger vessel, and Collingwood succeeded him in command of the Hinchinbrook and brought the remainder of the expedition back to Jamaica.

After commanding in another small frigate, HMS Pelican, in which he was shipwrecked by a hurricane in 1781, Collingwood was promoted to 64 gun ship of the line HMS Sampson, and in 1783 he was appointed to HMS Mediator and posted to the West Indies, where he remained until the end of 1786, again, together with Nelson and this time his brother, Captain Wilfred Collingwood, preventing American ships from trading with the West Indies.

In 1786 Collingwood returned to England, where, with the exception of a voyage to the West Indies, he remained until 1793. In that year, he was appointed captain of HMS Prince, the flagship of Rear Admiral George Bowyer in the Channel Fleet. On 16 June 1791, Collingwood married Sarah Blackett, daughter of the Newcastle merchant and politician John Erasmus Blackett and granddaughter of Robert Roddam (1711–1744) of Hethpoole and Caldburne (not to be confused with his former commander, later Admiral, Robert Roddam).

As captain of Barfleur, Collingwood was present at the Glorious First of June. On board the Excellent he participated in the victory of the Battle of Cape St Vincent in 1797, establishing a good reputation in the fleet for his conduct during the battle. After blockading Cadiz, he returned for a few weeks to Portsmouth to repair. At the beginning of 1799 Collingwood was raised to the rank of Rear-Admiral (of the White 14 February 1799; of the Red 1 January 1801) and, hoisting his flag in the Triumph, joined the Channel Fleet and sailed to the Mediterranean where the principal naval forces of France and Spain were assembled. Collingwood continued to be actively employed in blockading the enemy until the peace of Amiens allowed him to return to England.

With the resumption of hostilities with France in the spring of 1803 he left home, never to return. First he blockaded the French fleet off Brest. In 1804 he was promoted to Vice-Admiral (of the Blue 23 April 1804; of the Red 9 November 1805). Nearly two years were spent here but with Napoleon planning and equipping his armed forces for an invasion of Britain, the campaign which was to decide the fate of Europe and the command of the sea was starting. The French fleet having sailed from Toulon, Admiral Collingwood was appointed to command a squadron, with orders to pursue them. The combined fleets of France and Spain, after sailing to the West Indies, returned to Cadiz. On their way they encountered Collingwood's small squadron off Cadiz. He only had three ships with him; but he succeeded in avoiding the pursuit, although chased by sixteen ships of the line. Before half of the enemy's force had entered the harbour he resumed the blockade, using false signals to disguise the small size of his squadron. He was shortly joined by Nelson who hoped to lure the combined fleet into a major engagement.

The combined fleet sailed from Cadiz in October 1805. The Battle of Trafalgar immediately followed. Villeneuve, the French admiral, drew up his fleet in the form of a crescent. The British fleet bore down in two separate lines, the one led by Nelson in the Victory, and the other by Collingwood in the Royal Sovereign. The Royal Sovereign was the swifter sailer, mainly because its hull had been given a new layer of copper which lacked the friction of old, well used copper and thus was much faster. Having drawn considerably ahead of the rest of the fleet, it was the first engaged. "See", said Nelson, pointing to the Royal Sovereign as she penetrated the centre of the enemy's line, "see how that noble fellow Collingwood carries his ship into action!" Probably it was at the same moment that Collingwood, as if in response to the observation of his great commander, remarked to his captain, "What would Nelson give to be here?"

The Royal Sovereign closed with the Spanish admiral's ship and fired her broadsides with such rapidity and precision at the Santa Ana that the Spanish ship was on the verge of sinking almost before another British ship had fired a gun.[2] Several other vessels came to Santa Ana's assistance and hemmed in the Royal Sovereign on all sides; the latter, after being severely damaged, was relieved by the arrival of the rest of the British squadron, but was left unable to manoeuvre. Not long afterwards the Santa Ana struck her colours. On the death of Nelson, Collingwood assumed the command-in-chief, transferring his flag to the frigate Euryalus. Knowing that a severe storm was in the offing, Nelson had intended that the fleet should anchor after the battle, but Collingwood chose not to issue such an order: many of the British ships and prizes were so damaged that they were unable to anchor, and Collingwood concentrated efforts on taking damaged vessels in tow. In the ensuing gale, many of the prizes were wrecked on the rocky shore and others were destroyed to prevent their recapture, though no British ship was lost.

On 9 November 1805 Collingwood was promoted Vice-Admiral of the Red and raised to the peerage as Baron Collingwood, of Caldburne and Hethpool in the County of Northumberland.[3] He also received the thanks of both Houses of Parliament and was awarded a pension of £2000 per annum. Together with all the other captains and admirals, he also received a gold medal, his third, after those for the Glorious First of June and the Cape St Vincent; only Nelson and Sir Edward Berry share the distinction of three gold medals for service during the wars against France.

When not at sea he resided at Collingwood House in the town of Morpeth which lies some 15 miles north of Newcastle upon Tyne and Chirton Hall in Chirton, now a western suburb of North Shields. He is known to have remarked, "whenever I think how I am to be happy again, my thoughts carry me back to Morpeth."

From Trafalgar until his death no great naval action was fought though several small French fleets would attempt to run the blockade, and one successfully landed troops in the Caribbean two months after Trafalgar, the majority were hunted down and overwhelmed in battle. Collingwood was occupied in important political and diplomatic transactions in the Mediterranean, in which he displayed tact and judgement. In 1805 he was appointed to the Commander-in-Chief, Mediterranean Fleet. He requested to be relieved of his command that he might return home, however the government urgently required an admiral with the experience and skill of Collingwood to remain, on the grounds that his country could not dispense with his services in the face on the still potent threat that the French and their allies could pose. His health began to decline alarmingly in 1809, and he was forced to again request the Admiralty to allow him to return home, which was finally granted. Collingwood died on board the Ville de Paris, off Port Mahon as he sailed for England, on 7 March 1810.[4] He was laid to rest beside Nelson in the crypt of St Paul's Cathedral.

Collingwood's merits as a naval officer were in many respects of the first order. His political judgement was remarkable and he was consulted on questions of general policy, of regulation, and even of trade. He was opposed to impressment and to flogging and was considered so kind and generous that he was called "father" by the common sailors. Nelson and Collingwood enjoyed a close friendship, from their first acquaintance in early life until Nelson's death at Trafalgar; and they lie side by side in St Paul's Cathedral. As Collingwood died without male issue, his barony became extinct at his death.

Thackeray held that there was no better example of a virtuous Christian Knight than Collingwood.[5] Dudley Pope relates an aspect of Collingwood at the beginning of chapter three of his Life in Nelson's Navy: "Captain Cuthbert Collingwood, later to become an admiral and Nelson's second in command at Trafalgar, had his home at Morpeth, in Northumberland, and when he was there on half pay or on leave he loved to walk over the hills with his dog Bounce. He always started off with a handful of acorns in his pockets, and as he walked he would press an acorn into the soil whenever he saw a good place for an oak tree to grow. Some of the oaks he planted are probably still growing more than a century and a half later ready to be cut to build ships of the line at a time when nuclear submarines are patrolling the seas, because Collingwood's purpose was to make sure that the Navy would never want for oaks to build the fighting ships upon which the country's safety depended." Collingwood once wrote to his wife that he'd rather his body be added to Britain's sea defenses rather than given the pomp of a ceremonial burial.[6]

Sailor Robert Hay who served with Collingwood wrote that: "He and his dog Bounce were known to every member of the crew. How attentive he was to the health and comfort and happiness of his crew! A man who could not be happy under him, could have been happy nowhere; a look of displeasure from him was as bad as a dozen at the gangway from another man". and that: "a better seaman, a better friend to seamen - a more zealous defender of the country's rights and honour, never trod the quarterdeck." [6][7] 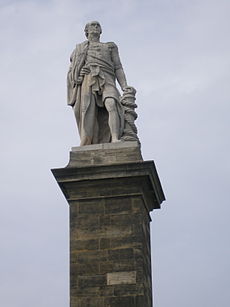 The Collingwood Monument at Tynemouth

The Maritime Warfare School of the Royal Navy is commissioned as HMS Collingwood, home to training for warfare, weapon engineering and communications disciplines.

A statue erected in his honour overlooks the River Tyne in the town of Tynemouth, at the foot of which are some of the cannon from the Royal Sovereign.

March 2010 saw the 200th anniversary of Collingwood's death and a number of major events were organised by 'Collingwood 2010' on Tyneside, in Morpeth and the island of Menorca.

Collingwood's residence in Es Castell close to Mahon, Menorca is now a hotel and home to a collection of heirlooms relating to his time on the island.[8]