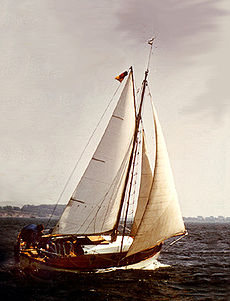 A gaff cutter, Kleine Freiheit, with a genoa jib set

A cutter is typically a small, but in some cases a medium-sized, watercraft designed for speed rather than for capacity.[1][2] Traditionally a cutter sailing vessel is a small single-masted boat, fore-and-aft rigged, with two or more headsails and often a bowsprit. The cutter's mast may be set farther back than on a sloop.[3]

In modern usage, a cutter can be either a small- or medium-sized vessel whose occupants exercise official authority. Examples are harbor pilots' cutters and cutters of the U.S. Coast Guard[4] or UK Border Force.

Cutters can also be a small boat serving a larger one to ferry passengers or light stores between larger boats and the shore. This type of cutter may be powered by oars, sails or a motor.[clarification needed] 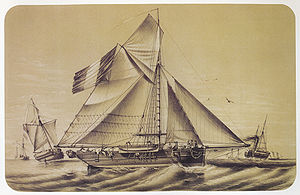 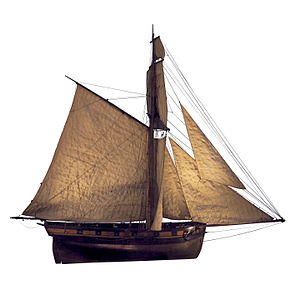 1/50-scale Model of the 14-carronade cutters that were in service in the French Navy during the 1830s.

The cutter is one of several types of sailboats. Traditionally the sloop rig was a rig with a single mast located forward of 70% of the length of the sailplan. In this traditional definition a sloop could have multiple jibs on a fixed bowsprit.[citation needed]

Cutters had a rig with a single mast more centrally located, which could vary from 50% to 70% of the length of the sailplan, with multiple headsails and a running bowsprit.[citation needed] A mast located aft of 50% would be considered a mast aft rig.

Somewhere in the 1950s or 1960s there was a shift in these definitions such that a sloop only flew one headsail and a cutter had multiple headsails and mast position became irrelevant. In this modern idiom, a cutter is a sailing vessel with more than one head sail and one mast. Cutters carry a staysail directly in front of the mast, set from the forestay. A traditional vessel would also normally have a bowsprit to carry one or more jibs from its end via jibstay(s) on travelers (to preserve the ability to reef the bowsprit). In modern vessels the jib may be set from a permanent stay fixed to the end of a fixed (non-reeving) bowsprit, or directly to the stem fitting of the bow itself. In these cases, that may be referred to as the forestay, and the inner one, which will be less permanent in terms of keeping the mast up, may be called the stays'l stay. A sloop carries only one head sail, called either the foresail or jib.[citation needed].

The cutter rig, especially a gaff rig version where the sails aft the mast were divided between a mainsail below the gaff and a topsail above, was useful for sailing with small crews as the total sail area was divided into smaller individual sails. These could be managed without the need for large crews, winches, or complex tackles, making the cutter especially suitable for pilot, customs and coast guard duties. For example, a pilot cutter may only have two people on board for its outward trip—the pilot to be delivered to a ship and an assistant who had to sail the cutter back to port single-handed. The cutter sailing rig became so ubiquitous for these tasks that the modern-day motorised vessels now engaged in these duties are known as 'cutters'. 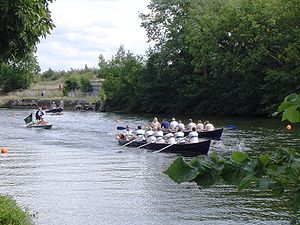 The open cutter carried aboard naval vessels in the 18th Century was rowed by pairs of men sitting side-by-side on benches. The cutter, with its transom, was broader in proportion compared to the longboat, which had finer lines.

The Watermen of London used similar boats in the 18th Century often decorated as depicted in historical prints and pictures of the River Thames in the 17th & 18th Centuries. The modern Waterman’s Cutter is based on drawings of these boats. They are 34 feet (10 m) long with a beam of 4 ft 6 in (1.37 m) They can have up to six oarsmen either rowing or sculling and can carry a cox and passengers. The organisers of the Great River Race developed the modern version in the 1980s and now many of the fleet of 24 compete annually in this "Marathon of the River". Watermen’s Cutters also compete annually in the Port of London Challenge, and the Port Admirals’ Challenge. Cutter races are also to be found at various town rowing and skiffing regattas. In addition the cutters perform the role of ceremonial Livery Barges with the canopies and armorial flags flying on special occasions.[5]

Cutters have been used for record-breaking attempts and crews have achieved record times for sculling the English Channel (2 h 42 min) in 1996 and for sculling non-stop from London to Paris (4 d 15 min) in 1999.[6]

A pulling cutter was a boat carried by sailing ships for work in fairly sheltered water in which load-carrying capacity was needed, for example in laying a kedge. This operation was the placing of a relatively light anchor at a distance from the ship so as to be able to haul her off in its direction. The oars were double-banked. That is, there were two oarsmen on each thwart. In a seaway, the longboat was preferred to the cutter as the finer lines of the stern of the former meant that it was less likely to broach to in a following sea. In the Royal Navy the cutters were replaced by 25 and 32-foot (9.8 m) motor cutters. However, the cutters' traditional work had grown beyond the capacity of a boat as ships became larger. Though primarily a pulling boat, this cutter could also be rigged for sailing. 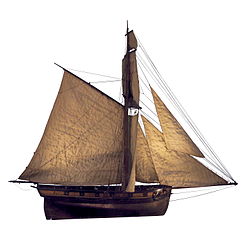 Cutters were widely used by several navies in the 17th and 18th centuries and were usually the smallest commissioned ships in the fleet. As with cutters in general they were distinguished by their large fore-aft sail plans with multiple headsails, usually carried on a very long bowsprit, which was sometimes as long as half the length of the boat's hull. The rig gave the cutter excellent maneuverability and they were much better at sailing to windward than a larger square rigged ship. Larger naval cutters often had the ability to hoist two or three square-rigged sails from their mast to improve their downwind sailing performance as well. Navies used cutters for coastal patrol, customs duties, escort, carrying personnel and dispatches and for small 'cutting out' raids. As befitted their size and intended role naval cutters were lightly armed, often with between six and twelve small cannon (or carronades in the Royal Navy).

In the rating system of the Royal Navy 'cutter' was the lowest classification, coming below the sloop-of-war as an 'unrated' vessel. Whilst the classification included true sailing cutters the rating was given to any ship of suitable size and/or importance. Under the system a 'cutter' was commanded by a lieutenant who would be the only commissioned officer on board. HMS Bounty was classed as a cutter under the command of Lieutenant William Bligh despite being a true ship with three square rigged masts. 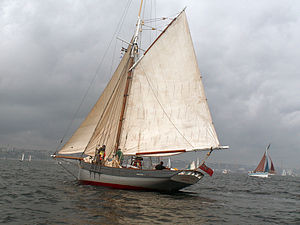 Wooden pilot cutter Lizzie May under sail in Brest, France

The pilot cutter developed from the need for a fast boat to take maritime pilots from harbour to incoming large trading vessels.

As most early pilots were local fisherman who undertook both jobs, although licensed by the harbour to operate within their jurisdiction, pilots were generally self-employed, and the quickest transport meant greater income. As their fishing boats were heavy working boats, and filled with fishing equipment, they needed a new type of boat; early boats were developed from single masted fishing cutter designs and twin masted yawls, and latterly into the specialist pilot cutter.

The natural dangers of the Bristol Channel brought about over many years the development of the specialist Bristol Channel Pilot Cutter. According to records from Pill, Somerset now housed in the Bristol Museum, the first official Bristol Channel pilot was barge master George James Ray, appointed by the Corporation of Bristol in May 1497 to pilot John Cabot's Matthew from Bristol harbour to the open sea beyond. In 1837 Pilot George Ray guided Brunel's SS Great Western, and in 1844 William Ray piloted the larger SS Great Britain on her maiden voyage.[7]

The term cutter is also used for any seaworthy vessel used in the law enforcement duties of Great Britain's Border Force, the United States Coast Guard (Revenue Cutter Service) or the customs services of other countries.

In America, customs cutters were commonly schooners or brigs. In Britain, they were usually rigged as defined under Sailing (above). The British Board of Customs also used other vessels as hulks, which were moored in places such as tidal creeks. Customs officers worked from the hulks in smaller boats.

In the UK, the Border Force (successor to the UK Border Agency and HM Customs and Excise) currently operates a fleet of 42 m corvette-type vessels throughout UK territorial waters as border cutters, inspecting vessels for illicit cargoes.