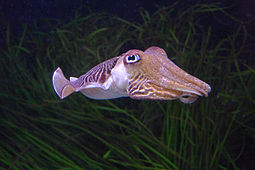 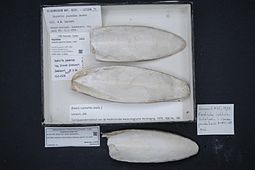 Cuttlefish are marine animals of the order Sepiida. They belong to the class Cephalopoda, which also includes squid, octopodes, and nautiluses. Cuttlefish have a unique internal shell, the cuttlebone. Despite their name, cuttlefish are not fish but molluscs.

Cuttlefish have large, W-shaped pupils, eight arms, and two tentacles furnished with denticulated suckers, with which they secure their prey. They generally range in size from 15 to 25 cm (5.9 to 9.8 in), with the largest species, Sepia apama, reaching 50 cm (20 in) in mantle length and over 10.5 kg (23 lb) in mass.[1]

The 'cuttle' in 'cuttlefish' comes from the Old English word cudele, meaning 'cuttlefish', which may be cognate with the Old Norse koddi ('cushion') and the Middle Low German Kudel ('rag').[citation needed] The Greco-Roman world valued the cephalopod as a source of the unique brown pigment the creature releases from its siphon when it is alarmed. The word for it in both Greek and Latin, sepia, is now used to refer to a brown pigment in English.

The family Sepiidae, which contains all cuttlefish, inhabit tropical/temperate ocean waters. They are mostly shallow-water animals, although they are known to go to depths of about 600 m (2,000 ft).[3] They have an unusual biogeographic pattern: totally absent from the Americas, but present along the coasts of East and South Asia, Western Europe, and the Mediterranean, as well as all coasts of Africa and Australia. By the time the family evolved, ostensibly in the Old World, the North Atlantic possibly had become too cold and deep for these warm-water species to cross.[4]

Top and bottom view of a cuttlebone, the buoyancy organ and internal shell of a cuttlefish

A cuttlefish possesses an internal structure called the cuttlebone, which is porous and is made of aragonite. The pores provide it with buoyancy, which it regulates by changing the gas-to-liquid ratio in the chambered cuttlebone via the ventral siphuncle.[5] Each species' cuttlebone has a distinct shape, size, and pattern of ridges or texture. The cuttlebone is unique to cuttlefish, and is one of the features that distinguish them from their squid relatives. Jewellers and silversmiths traditionally use cuttlebones as moulds for casting small objects,[6] but they are probably better known as the tough material given to parakeets and other caged birds as a source of dietary calcium. 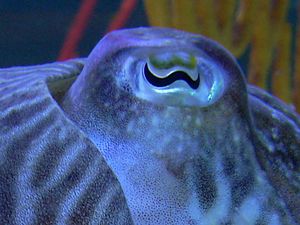 Cuttlefish, like other cephalopods, have sophisticated eyes. The organogenesis and the final structure of the cephalopod eye fundamentally differ from those of vertebrates such as humans.[7] Superficial similarities between cephalopod and vertebrate eyes are thought to be examples of convergent evolution. The cuttlefish pupil is a smoothly curving W-shape.[8][9] Although cuttlefish cannot see color,[10] they can perceive the polarization of light, which enhances their perception of contrast. They have two spots of concentrated sensor cells on their retina (known as foveae), one to look more forward, and one to look more backward. The eye changes focus by shifting the position of the entire lens with respect to the retina, instead of reshaping the lens as in mammals. Unlike the vertebrate eye, there is no blind spot, because the optic nerve is positioned behind the retina.

Cuttlefish's eyes are speculated to be fully developed before birth and start observing their surroundings while still in the egg, and may prefer to hunt the prey they saw before hatching.[11]

The suckers of cuttlefish extend most of the length of their arms and along the distal portion of their tentacles.

The blood of a cuttlefish is an unusual shade of green-blue because it uses the copper-containing protein haemocyanin to carry oxygen instead of the red, iron-containing protein haemoglobin found in vertebrates' blood. The blood is pumped by three separate hearts: two branchial hearts pump blood to the cuttlefish's pair of gills (one heart for each), and the third pumps blood around the rest of the body. Cuttlefish blood must flow more rapidly than that of most other animals because haemocyanin carries substantially less oxygen than haemoglobin.

Cuttlefish have ink, like squid and octopus species, which they use to help evade predators.[citation needed] This ink is stored inside an ink sac.

Like octopuses and some squid, all cuttlefish are venomous. The genes for venom production are thought to be descended from a common ancestor.[12]

The muscles of Metasepia pfefferi (the Flamboyant Cuttlefish) contain a highly toxic and as-of-yet unidentified compound,[2] making it one of the few poisonous cephalopods. Mark Norman with Museum Victoria in Victoria, Australia, has shown the toxin to be as lethal as that of a fellow cephalopod, the blue-ringed octopus.[13]

[14] Male cuttlefish challenge one another for dominance and the best den during mating season. During this challenge, no direct contact is usually made. The animals threaten each other until one of them backs down and swims away. Eventually, the larger male cuttlefish mate with the females by grabbing them with their tentacles, turning the female so that the two animals are face-to-face, then using a specialized tentacle to insert sperm sacs into an opening near the female's mouth. The male then guards the female until she lays the eggs a few hours later.

On occasion, a large competitor arrives to threaten the male cuttlefish. In these instances, the male will first attempt to intimidate the other fish. If the competitor does not flee, the male will eventually attack it to force it away, and the confrontation turns physical. The cuttlefish that can paralyze the other first, by forcing it near its mouth, would win the fight and the female. Since there are, on average, four or five ( and sometimes as many as ten) males for every female, this kind of behavior is inevitable.[15]

Cuttlefish are indeterminate growers, so smaller cuttlefish always have a chance at finding a mate the next year, when they are bigger.[16] Additionally, cuttlefish unable to win in a direct confrontation with a guard male have been observed employing several other tactics to acquire a mate. The most successful of these methods is camouflage; smaller cuttlefish will use their camouflage abilities to disguise themselves as a female cuttlefish. Changing their body colour, concealing their extra arms (males have four pairs, females only have three), and even pretending to be holding an egg sack, disguised males are able to swim past the larger guard male and mate with the female.[15][17][18] 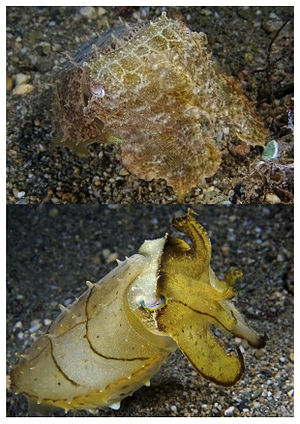 This broadclub cuttlefish (Sepia latimanus) can change from camouflage tans and browns (top) to yellow with dark highlights (bottom) in less than one second. 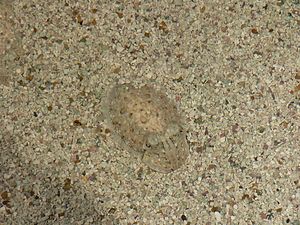 Juvenile cuttlefish camouflaged against the seafloor

Cuttlefish are sometimes referred to as the "chameleons of the sea" because of their remarkable ability to rapidly alter their skin colour at will. Cuttlefish change colour and pattern (including the polarization of the reflected light waves), and the shape of the skin to communicate to other cuttlefish, to camouflage themselves, and as a deimatic display to warn off potential predators.

This colour-changing function is produced by groups of red, yellow, brown, and black[19] pigmented chromatophores above a layer of reflective iridophores and leucophores, with up to 200 of these specialized pigment cells per square millimeter,[20] which would correspond to about 359 DPI if they could be individually controlled. The pigmented chromatophores have a sac of pigment and a large membrane that is folded when retracted. There are six to twenty small muscles on the sides of the cuttlefish that can contract to squash the elastic sac into a disc against the skin. Yellow chromatophores are closest to the surface of the skin, red and orange are below, and brown or black are just above the iridophore layer. The iridophores reflect blue-green light. Iridophores are plates of reflectin proteins, which refract light.[21] They are responsible for the metallic blues and greens often seen on cuttlefish. Overlying chromatophores can alter the light reaching reflective cells allowing expression of mixed colourations. As well as being able to influence the color of light as it reflects off their skin, cuttlefish can also affect the light's polarization, which can be used to signal to other marine animals, many of which can also sense polarization.[22]

The chromatophores are elastic sacs containing different pigments. Bands of muscle radiate from each chromatophore and are controlled by neurons from the motor centres in the brain. The cuttlefish can control the contraction and relaxation of the muscles around individual chromatophores, thereby opening or closing the elastic sacs and allowing different levels of pigment to emerge. This allows the cuttlefish to change its colour at will to match its background for camouflage. Reflecting plates called leucophores and iridophores are specialized to reflect certain wavelengths of light and can be used in conjunction with the chromatophores to create shimmering color effects on the skin. The reflectance spectra of cuttlefish camouflage patterns and several natural substrates (stipple, mottle, disruptive) can be measured using an optic spectrometer.[23]

Cuttlefish [24] are able to rapidly change the color of their skin[25] to match their surroundings and create chromatically complex patterns, despite their inability to perceive colour, through some mechanism which is not completely understood.[24] They have been seen to have the ability to assess their surroundings and match the colour, contrast and texture of the substrate even in total darkness.[26]

The colour variations in the mimicked substrate and animal skin are very similar. Depending on the species, the skin of cuttlefish responds to substrate changes in distinctive ways. By changing naturalistic backgrounds, the camouflage responses of different species can be measured.[27] Sepia officinalis changes color to match the substrate by disruptive patterning (contrast to break up the outline), where as S. pharanonis matches the substrate by blending in. Although camouflage is achieved in different ways, and in an absence of colour vision, both species change their skin colours to match the substrate. Cuttlefish adapt their own camouflage pattern in ways that are very specific for a particular habitat. An animal could settle in the sand and appear one way, with another animal a few feet away in a slightly different microhabitat, settled in algae for example, will be camouflaged quite differently.[26]

While the preferred diet of cuttlefish is crabs and fish, they feed on small shrimp shortly after hatching.[28]

Cuttlefish use their camouflage to hunt and sneak up on their prey.[29] They swim at the bottom, where shrimp and crabs are found and shoot out a jet of water to uncover the prey buried in the sand. Then when the prey tries to get away, the cuttlefish open their eight arms and shoot out two long feeding tentacles to grab them. On the end of each, a pad covered in suckers grabs and pulls prey toward its beak, where it gets paralyzed by venom and then eaten.[28]

Video of a cuttlefish in its natural habitat

Over 120 species of cuttlefish are currently recognised, grouped into five genera. Sepiadariidae contains seven species and two genera; all the rest are in Sepiidae. 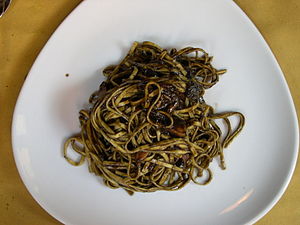 Linguine with cuttlefish and ink sauce served at a Venetian osteria

Cuttlefish are caught for food in the Mediterranean, East Asia, the English Channel, and elsewhere.

In East Asia, dried, shredded cuttlefish is a popular snack food. In the Qing Dynasty manual of Chinese gastronomy, the Suiyuan shidan, the roe of the cuttlefish is considered a difficult to prepare but sought-after delicacy.[30]

Research into replicating biological color-changing has led to engineering artificial chromatophores out of small devices known as dielectric elastomer actuators. Engineers at the University of Bristol have engineered soft materials that mimic the color-changing skin of animals like cuttlefish,[31] paving the way for "smart clothing" and camouflage applications.[32]

In the UK, the Marine Institute (which is part of Plymouth Polytechnic) has been offering rewards of up to £50 for capture of cuttlefish and return of their electronic monitoring tag.[33]

Cuttlefish are rarely kept as pets, due in part to their fairly short lifetimes, but the most common to be kept are Sepia officinalis or Sepia bandensis.[34]