In algebra, a cyclic group is a group that is generated by a single element.[1] That is, it consists of a set of elements with a single invertible associative operation, and it contains an element g such that every other element of the group may be obtained by repeatedly applying the group operation or its inverse to g. Each element can be written as a power of g in multiplicative notation, or as a multiple of g in additive notation. This element g is called a generator of the group.[1] Every infinite cyclic group is isomorphic to the additive group of Z, the integers. Every finite cyclic group of order n is isomorphic to the additive group of Z/nZ, the integers modulo n. Every cyclic group is an abelian group (meaning that its group operation is commutative), and every finitely generated abelian group is a direct product of cyclic groups. 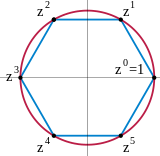 The six 6th complex roots of unity form a cyclic group under multiplication. z is a primitive element, but z2 is not, because the odd powers of z are not a power of z2.

A group G is called cyclic if there exists an element g in G such that G = ⟨g⟩ = { gn | n is an integer }. Since any group generated by an element in a group is a subgroup of that group, showing that the only subgroup of a group G that contains g is G itself suffices to show that G is cyclic.

The name "cyclic" may be misleading:[2] it is possible to generate infinitely many elements and not form any literal cycles; that is, every gn is distinct. (It can be thought of as having one infinitely long cycle.) A group generated in this way (for example, the first frieze group, p1) is called an infinite cyclic group, and is isomorphic to the additive group of the integers, (Z, +).

For every positive integer n, the set of integers modulo n, again with the operation of addition, forms a finite cyclic group, the group Z/n.[1] An element g is a generator of this group if g is relatively prime to n. Thus, the number of different generators is φ(n), where φ is the Euler totient function, the function that counts the number of numbers modulo n that are relatively prime to n. Every finite cyclic group is isomorphic to a group Z/n, where n is the order of the group.

The integer and modular addition operations, used to define the cyclic groups, are both the addition operations of commutative rings, also denoted Z and Z/n. If p is a prime, then Z/p is a finite field, and is usually instead written as Fp or GF(p). Every field with p elements is isomorphic to this one.

For every positive integer n, the subset of the integers modulo n that are relatively prime to n, with the operation of multiplication, forms a finite group that for many values of n is again cyclic. It is the group under multiplication modulo n, and it is cyclic whenever n is 1, 2, 4, a power of an odd prime, or twice a power of an odd prime.[3] (sequence A033948 in OEIS) [4] Its elements are the units of the ring Z/nZ; there are φ(n) of them, where again φ is the totient function. This group is written as (Z/nZ)×. For example, (Z/6Z)× has as its elements {1,5}; 6 is twice a prime, so this is a cyclic group. In contrast, (Z/8Z)× (with elements {1,3,5,7}) is the Klein group and is not cyclic. When (Z/nZ)× is cyclic, every generator of (Z/nZ)× is called a primitive root modulo n.

The cyclic group (Z/pZ)× for a prime number p, is also written (Z/pZ)* because it consists of the non-zero elements of the finite field of order p. More generally, every finite subgroup of the multiplicative group of any field is cyclic.[5]

The set of rotational symmetries of a polygon forms a finite cyclic group.[6] If there are n different ways of mapping the polygon to itself by a rotation (including the null rotation) then this group is isomorphic to Zn. In three or higher dimensions there can exist other finite symmetry groups that are cyclic, but that do not form the set of rotations around a single axis.

The group S1 of all rotations of a circle (the circle group) is not cyclic. Unlike the infinite cyclic group, it is not even countable. There also exist other infinite rotation groups (such as the set of rotations by rational angles) that are countable but not cyclic.

An nth root of unity may be thought of as a complex number whose nth power is 1. That is, it is a root of the polynomial xn − 1. The nth roots of unity form a cyclic group of order n under multiplication.[1] For example, the polynomial 0 = z3 − 1 factors as (z − s0)(z − s1)(z − s2), where s = e2πi/3; the set {s0, s1, s2} forms a cyclic group under multiplication. The Galois group of the field extension of the rational numbers generated by the nth roots of unity forms a different group. It is isomorphic to the multiplicative group modulo n, which has order φ(n) and is cyclic for some but not all n.

All subgroups and quotient groups of cyclic groups are cyclic. Specifically, all subgroups of Z are of the form mZ, with m an integer ≥0. All of these subgroups are distinct from each other, and apart from the trivial group (for m = 0) all are isomorphic to Z. The lattice of subgroups of Z is isomorphic to the dual of the lattice of natural numbers ordered by divisibility.[9] In particular, because the prime numbers are the numbers with no nontrivial divisors, a cyclic group is simple if and only if its order (the number of its elements) is prime.[10]

Since the cyclic groups are abelian, they are often written additively and denoted Zn with the identity written 0. However, this notation can be problematic for number theorists because it conflicts with the usual notation for p-adic number rings or localization at a prime ideal. The quotient notations Z/nZ, Z/n, and Z/(n) are standard alternatives. One may instead write the group multiplicatively, and denote it by Cn, where n is the order for finite groups and by C for the infinite cyclic group.[11] For example, g2g4 = g1 in C5, whereas 2 + 4 = 1 in Z/5Z.

All quotient groups of Z are finite, except for the trivial exception Z/{0} = Z/0Z. For every positive divisor d of n, the quotient group Z/nZ has precisely one subgroup of order d, the one generated by the residue class of n/d. There are no other subgroups. Using the quotient group formalism, Z/nZ is a standard notation for the additive cyclic group with n elements. In ring terminology, the subgroup nZ is also the ideal (n), so the quotient can also be written Z/(n) or Z/n without abuse of notation. These alternatives do not conflict with the notation for the p-adic integers. The last form is very common in informal calculations; it has the additional advantage that it reads the same way that the group or ring is often described verbally in English, "Zee mod en".

Every cyclic group is abelian.[1] That is, its group operation is commutative: gh = hg (for all g and h in G). This is clear for the groups of integer and modular addition since r + s ≡ s + r (mod n), and it follows for all cyclic groups since they are all isomorphic to a group generated by an addition operation. For a finite cyclic group of order n, and every element e of the group, en is the identity element of the group. This again follows by using the isomorphism to modular addition, since kn ≡ 0 (mod n) for every integer k.

A cycle graph illustrates the various cycles of a group and is particularly useful in visualizing the structure of small finite groups. A cycle graph for a cyclic group is simply a circular graph, where the group order is equal to the number of nodes. A single generator defines the group as a directional path on the graph, and the inverse generator defines a backwards path. Trivial paths (identity) can be drawn as a loop but are usually suppressed. Z2 is sometimes drawn with two curved edges as a multigraph.[15]

Cyclic groups Zn, order n, is a single cycle graphed simply as an n-sided polygon with the elements at the vertices. A cyclic group Zn can be decomposed into a direct product Za×Zb where n=ab, where a and b are relatively prime (gcd(a,b)=1).

and the group of homomorphisms

can be shown to both be isomorphic to

For the tensor product, this is a consequence of the general fact

. For the Hom group, recall that it is isomorphic to the subgroup of

consisting of the elements of order dividing m. That subgroup is cyclic of order gcd (m, n), which completes the proof.

Several other classes of groups have been defined by their relation to the cyclic groups:

A locally cyclic group is a group in which each finitely generated subgroup is cyclic. An example is the additive group of the rational numbers: every finite set of rational numbers is a set of integer multiples of a single unit fraction, the inverse of their lowest common denominator, and generates as a subgroup a cyclic group of integer multiples of this unit fraction. A group is locally cyclic if and only if its lattice of subgroups is a distributive lattice.[21]