Cypriot Greek (Greek: κυπριακά) is the variety of Modern Greek that is spoken by the majority of the Cypriot populace and diaspora Greek Cypriots. It is a markedly divergent variety as it differs from Standard Modern Greek[note 2] in its lexicon,[2] phonetics, phonology, morphology, syntax and even pragmatics,[3] not only for historical reasons, but also because of geographical isolation, different settlement patterns, and extensive contact with typologically distinct languages.[4]

File:Griechisch Isoglossen 1900.png
Some phonological phenomena Cypriot shares with varieties of the Aegean: word-initial gemination; word-final /n/; and palatalisation of /k/ to [t͡ʃ] (note, however, that Κυριακή is pronounced [ciɾiaˈci] in Cypriot, and not *[t͡ʃirjaˈt͡ʃi]).

Cypriot Greek is not an evolution of the ancient Arcadocypriot dialect, but derives from Byzantine Koine.[5] It has traditionally been placed to the south-eastern group of Modern Greek dialects, along with the dialects of the Dodecanese and Chios (with which it shares several phonological phenomena).

Though Cypriot Greek tends to be regarded as a dialect by its speakers, it is unintelligible to speakers of Standard Modern Greek without adequate prior exposure.[6] Greek-speaking Cypriots are diglossic in Cypriot Greek, the vernacular (low variety), and Standard Modern Greek, the high variety.[7][8] Cypriot Greek is itself a dialect continuum with an emerging koine.[9] Davy, Ioannou & Panayotou (1996) argue that diglossia has given way to a "post-diglossic [dialectal] continuum [...] a quasi-continuous spread of overlapping varieties".[10]

Stops /p t c k/ and affricate /t͡ʃ/ are unaspirated and may be pronounced weakly voiced in fast speech.[12] /pʰː tʰː cʰː kʰː/ are always heavily aspirated and they are never preceded by nasals,[13] with the exception of some loans, e.g. /ʃamˈpʰːu/ "shampoo".[14] /t͡ʃ/ and /t͡ʃʰː/ are laminal post-alveolars.[15] /t͡s/ is pronounced similarly to /t͡ʃʰː/, in terms of closure duration and aspiration.[15]

Voiced fricatives /v ð ɣ/ are often pronounced as approximants and they are regularly elided when intervocalic.[12] /ʝ/ is similarly often realised as an approximant [j] in weak positions.[16]

The palatal lateral approximant /ʎ/ is most often realised as a singleton or geminate lateral [ʎ(ː)] or a singleton or geminate fricative [ʝ(ː)], and sometimes as a glide [j] (cf. yeismo).[17] The circumstances under which all the different variants surface are not very well understood, but [ʝ(ː)] appear to be favoured in stressed syllables and word-finally, and before /a e/.[18] Pappas 2009 identifies the following phonological and non-phonological influencing factors: stress, preceding vowel, following vowel, position inside word; and sex, education, region, and time spent living in Greece (where [ʎ] is standard).[18] Arvaniti 2010 notes that speakers of some local varieties, notably that of Larnaca, "substitute" the geminate fricative for /ʎ/,[19] but Pappas 2009 contests this, saying that, "[ʝ(ː)] is robustly present in the three urban areas of Lefkosia, Lemesos and Larnaka as well as the rural Kokinohoria region, especially among teenaged speakers ... the innovative pronunciation [ʝ(ː)] is not a feature of any local patois, but rather a supra-local feature."[20]

The palatal nasal /ɲ/ is produced somewhat longer than other singleton nasals, though not as long as geminates. /z/ is similarly "rather long".[12]

The alveolar trill /r/ is the geminate counterpart of the tap /ɾ/.[15]

In analyses that posit a phonemic (but not phonetic) glide /j/, palatals and postalveolars arise from CJV (consonant–glide–vowel) clusters, namely:[21]

There is considerable disagreement on how to classify Cypriot Greek geminates, though they are now generally understood to be "geminates proper" (rather than clusters of identical phonemes or "fortis" consonants).[22] Geminates are 1.5 to 2 times longer than singletons, depending, primarily, on position and stress.[23] Geminates occur both word-initially and word-medially. Word-initial geminates tend to be somewhat longer.[24] Tserdanelis & Arvaniti 2001 have found that "for stops, in particular, this lengthening affects both closure duration and VOT",[25] but Davy & Panayotou 2003 claim that stops contrast only in aspiration, and not duration.[26] Armosti 2010 undertook a perceptual study with thirty native speakers of Cypriot Greek,[27] and has found that both closure duration and (the duration and properties of) aspiration provide important cues in distinguishing between the two kinds of stops, but aspiration is slightly more significant.[28]

Word-final /n/ assimilates with succeeding consonants—other than stops and affricates—at word boundaries producing post-lexical geminates.[29] Consequently, geminate voiced fricatives, though generally not phonemic, do occur as allophones. Below are some examples of geminates to arise from sandhi.

Like with /n/, word-final /s/ assimilates to following [s] and [ʃ] producing geminates:[32]

Lastly, word-final /s/ becomes voiced when followed by a voiced consonant belonging to the same phrase:[31] 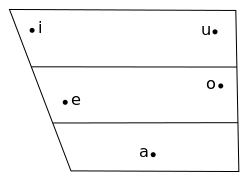 Cypriot Greek has a five-vowel system /a e i o u/ similar to that of Standard Modern Greek.[30][33]

Back vowels /i u/ following /t/ at the end of an utterance are regularly reduced (50% of all cases presented in study) to "fricated vowels" (40% of all cases, cf. Slavic yers), and are sometimes elided altogether (5% of all cases).[34]

Cypriot Greek has "dynamic" stress.[31] Both consonants and vowels are longer in stressed than in unstressed syllables, and the effect is stronger word-initially.[35] There is only one stress per word, and it can fall on any of the last four syllables. Stress on the fourth syllable from the end of a word is rare and normally limited to certain verb forms. Because of this possibility, however, when words with antepenultimate stress are followed by an enclitic in Cypriot Greek, no extra stress is added (unlike Standard Modern Greek, where the stress can only fall on one of the last three syllables),[31] e.g. Cypriot Greek το ποδήλατον μου [to poˈðilato‿mːu], Standard Modern Greek το ποδήλατό μου [to poˌðilaˈto‿mu] "my bicycle".

The main morphological differences between Standard Modern Greek and Cypriot Greek are the following:[36]

The main syntactic differences between Standard Modern Greek and Cypriot Greek are the following:[37]

Ethnologue reports that the lexical similarity between Cypriot Greek and Dimotiki is in the range of 84%–93%.[38]

There is no established orthography for Cypriot Greek.[39][40] Efforts have variably been made to introduce diacritics to the Greek alphabet to represent palato-alveolar consonants found in Cypriot, but not in Standard Modern Greek, e.g. the combining caron ⟨ˇ⟩, by the authors of the "Syntychies" lexicographic database at the University of Cyprus.[41] When diacritics are not used, an epenthetic ⟨ι⟩—often accompanied by the systematic substitution of the preceding consonant letter—may be used to the same effect (as in Polish), e.g. Standard Modern Greek παντζάρι [paˈ(n)d͡zaɾi] → Cypriot Greek ππαντζιάρι [pʰːaˈnd͡ʒaɾi], Standard Modern Greek χέρι [ˈçeɾi] → Cypriot Greek σιέρι [ˈʃeɾi].

Geminates (and aspirates) are represented by two of the same letter, e.g. σήμμερα [ˈsimːeɾa] "today", though this may not be done in cases where the spelling would not coincide with Standard Modern Greek's, e.g. σήμμερα would still be spelt σήμερα.[note 3]

In computer-mediated communication, Cypriot Greek, like Standard Modern Greek, is commonly written in the Latin script,[42] and English spelling conventions may be adopted for shared sounds,[43] e.g. ⟨sh⟩ for /ʃ/ (and /ʃː/).

Cyprus was cut off from the rest of the Greek-speaking world from the 7th to the 10th century AD due to Arab attacks. It was reintegrated in the Byzantine Empire in 962 to be isolated again in 1191 when it fell to the hands of the Crusaders. These periods of isolation led to the development of various linguistic characteristics distinct from Byzantine Greek.

The oldest surviving written works in Cypriot date back to the Medieval period. Some of these are: the legal code of the Kingdom of Cyprus, the Assizes of Jerusalem; the chronicles of Leontios Machairas and Georgios Voustronios; and a collection of sonnets in the manner of Francesco Petrarca. In the past hundred years, the dialect has been used in poetry (with major poets being Vasilis Michaelides and Dimitris Lipertis). It is also traditionally used in folk songs and τσιαττιστά (battle poetry, a form of playing the Dozens) and the tradition of ποιητάρηες (bards).

In the late seventies, Minister of Education Chrysostomos A. Sofianos upgraded the status of Cypriot by introducing it in education. More recently, it has been used in music, e.g. in reggae by Hadji Mike and in rap by several Cypriot hip hop groups, such as Dimiourgoi Neas Antilipsis (DNA). Locally produced television shows, usually comedies or soap operas, make use of the dialect, e.g. "Vourate Geitonoi" (βουράτε instead of τρέξτε) or "Oi Takkoi" (Τάκκος being a uniquely Cypriot name). The 2006 feature film Pirates of the Caribbean: Dead Man's Chest features actor Jimmy Roussounis arguing in Cypriot with another crew member speaking Gibrizlidja (Cypriot Turkish) about a captain's hat they find in the sea. Peter Polycarpou routinely spoke in Cypriot in his role as Chris Theodopolopoudos in the British television comedy series Birds of a Feather.

Today, Cypriot Greek is the only variety of Modern Greek with a significant presence of spontaneous use online, including blogs and internet forums, and there exists a variant of Greeklish that reflects its distinct phonology.