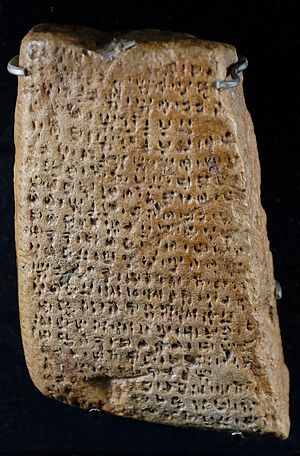 Cypro-Minoan tablet from Enkomi in the Louvre. 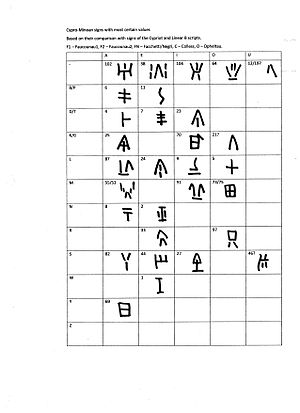 The current (2015) consensus about values of certain CM signs, based on their comparison with the Cypriot signs. Created by D. Lytov based on recent publications (Colless, Faucounau, Ferrara, Steele) referenced in the article text.

The Cypro-Minoan syllabary (CM) is an undeciphered syllabic script used on the island of Cyprus during the Late Bronze Age (ca. 1550–1050 BC). The term "Cypro-Minoan" was coined by Sir Arthur Evans in 1909 based on its visual similarity to Linear A on Minoan Crete, from which CM is thought to be derived.[1] Approximately 250 objects—such as clay balls, cylinders, and tablets and votive stands—which bear Cypro-Minoan inscriptions, have been found. Discoveries have been made at various sites around Cyprus, as well as in the ancient city of Ugarit on the Syrian coast.

Little is known about how this script originated or about the underlying language. However, its use continued into the Early Iron Age, forming a link to the Cypriot syllabary, which has been deciphered as Greek.

Arthur Evans considered the Cypro-Minoan syllabary to be a result of uninterrupted evolution of the Minoan Linear A script. He believed that the script was brought to Cyprus by Minoan colonizers or immigrants. His perspective was uncritically supported until recently, when it was shown that the earliest Cypro-Minoan inscription were separated from the earliest texts in Linear A by less than a century, yet the Cypro-Minoan script at its earliest stage was much different from Linear A: it contained only syllabic signs while Linear A and its descendant Linear B both contained multiple ideograms, and its form was adapted to writing on clay while Linear A was better suitable for writing in ink. It is noteworthy that Linear B script that emerged a century later still retained much more features and most of the signary of Linear A. All this evidence indicates rather a one-time introduction than long-time development.[2]

The earliest inscriptions are dated about 1550 BC.

Although some scholars disagree with this classification,[3] the inscriptions have been classified by Emilia Masson into four closely related groups:[4] archaic CM, CM1 (also known as Linear C), CM2, and CM3, which she considered chronological stages of development of the writing. This classification was and is generally accepted, but in 2011 Silvia Ferrara contested its chronological nature based on the archaeological context. She pointed out that CM1, CM2 and CM3 all existed simultaneously, their texts demonstrated same statistical and combinatorial regularities, their character sets should have been basically the same; she points out at strong correlation between these groups and the use of different writing materials. Only the archaic CM found in the earliest archaeological context is indeed distinct from these three.[5]

It is noteworthy that CM script was absent in some Bronze Age cities of Cyprus, yet abundant in others.

Unlike many other neighbouring states, the Bronze Age collapse had only a slight impact on Cyprus; in fact, the period immediately following the dramatic events of the collapse was the flourishing of the island culture, with visible increase of use of the script in such centres as Enkomi. On the other hand, as a direct result of this collapse, the script ceased to exist in Ugarit, together with the polis itself. Since then, the number of Greek artifacts gradually increases in the Cypriot context, and around 950 BC the Cypro-Minoan script suddenly disappears being soon substituted by the new Cypriot syllabary, whose inscriptions represent mainly the Greek language, with just a few short texts in Eteocypriot language.

As long as the script remains undeciphered (with only about 15-20 signs having clear parallels in cognate scripts), it can only be speculated whether the language was the same as Minoan or Eteocypriot, and whether these two were identical. However, Silvia Ferrara and A. Bernard Knapp noted that the name "Cypro-Minoan" (based on the origin of the script) is rather deceptive, as the archaeological context of Cyprus was largely different from that of Minoan Crete, even in spite of visible traces of trade with Crete in the archaeological context, as well as common presence of Cypriot and Cretan writing in Ugarit. There were no visible traces of Minoan invasion, colonization or even significant cultural influence in Bronze Age Cyprus; at that time the island was part of the Near East cultural circle[6] rather than Aegean.

Based on the above-mentioned classification of the script into several varieties, Emilia Masson hypothetized that they may (not necessarily) represent different languages that chronologically supplanted each other. Silvia Ferrara, while disproving Masson's hypothesis about these varieties as chronological stages, also indicated that the statistics of use of signs for all the varieties, as well as several noticeable combinations of signs, were the same for all the varieties, which may point on the same language rather than different ones.

The earliest known CM inscription found in Europe was a clay tablet discovered in 1955 at the ancient site of Enkomi, near the east coast of Cyprus. It was dated to ca. 1500 BC, and bore three lines of writing.[7] Other fragments of clay tablets have been found at Enkomi and Ugarit.

Dozens of small clay balls, each bearing 3–5 signs in CM1, have been uncovered at Enkomi and Kition. 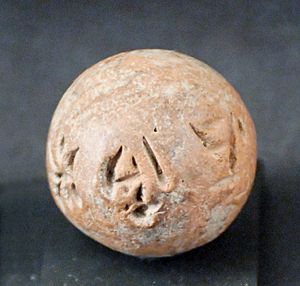 Cypro-Minoan clay ball in the Louvre.

Clay cylinder seals have been uncovered at Enkomi and Kalavassos-Ayios Dimitrios, some of which bear lengthy texts (more than 100 characters). It is likely that the balls and cylinder seals are related to the keeping of economic records on Minoan Cyprus, considering the large number of cross-references between the texts.[8]

The extant corpus of Cypro-Minoan is not large enough to allow for the isolated use of a cryptographic solution to decipherment. Currently, the total number of signs on formal Cypro-Minoan inscriptions (approx. 2,500) compares unfavorably with the number known from the undeciphered Linear A documents (over 7,000) and the number available in Linear B when it was deciphered (approx. 30,000). Furthermore, different languages may have been represented by the same Cypro-Minoan subsystem, and without the discovery of bilingual texts or many more texts in each subsystem, decipherment is extremely unlikely.[9] According to Thomas G. Palaima, "all past and current schemes of decipherment of Cypro-Minoan are improbable".[3] This is also the view of Silvia Ferrara (2012) in her detailed analysis of the subject.

Nevertheless, the attempt of Werner Nahm (Studien zur kypro-minoischen Schrift, Kadmos 20 (1981) 52–63) looks promising: it can be seen that the Bronze Age characters of this script became the syllabograms of the Cyprian syllabary of the Iron Age (sometimes called Linear C, mainly used for writing Greek); it is also clear that Cretan Linear A characters were adopted and adapted for this new Cyprus script; most of the Linear A sound-values are known from the equivalent syllabograms in the Linear B inventory; by judicious matching of the signs and the known values a table can be drawn up which allows the Cyprus texts to be transcribed, as has been done with Linear A documents, even though in both cases the meaning of the transcribed texts may be obscure.

The entire puzzle can be solved in this way, and Werner Nahm was able to read tablet RS 20.25 from Ugarit in Syria as a list of plausible names (Semitic, Hurrian, Anatolian) ending in line 19 with sha-shi-ma-li-ki (Shamshi-Maliki,as a West Semitic name), or, it may be suggested here, "servants of the King" (referring to the named men). The names on the clay balls (see photograph) can thus be transcribed; some are Semitic, most are presumably in the local language.