From Infogalactic: the planetary knowledge core
(Redirected from Cyprus under the Ottoman Empire)
Jump to: navigation, search

Throughout the period of Venetian rule, Ottoman Turks raided and attacked the peoples of Cyprus at will. The Greek population of Cyprus were given weapons by their rulers the Venetians and fought the attacking Ottomans.

In 1489, the first year of Venetian control, Turks attacked the Karpass Peninsula, pillaging and taking captives to be sold into slavery.[4] In 1539 the Turkish fleet attacked and destroyed Limassol.[4] Fearing the ever-expanding Ottoman Empire, the Venetians had fortified Famagusta, Nicosia, and Kyrenia, but most other cities were easy prey. 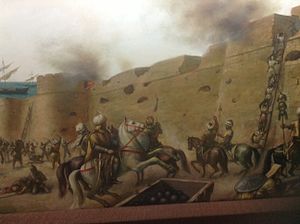 In the summer of 1570, the Turks struck again, but this time with a full-scale invasion rather than a raid. About 60,000 troops, including cavalry and artillery, under the command of Lala Mustafa Pasha landed unopposed near Limassol on July 2, 1570, and laid siege to Nicosia. The city fell—September 9, 1570 fell—20,000 Nicosians were put to death, and every church, public building, and palace was looted. Only women and boys who were captured to be sold as slaves were spared.[5][6] Word of the massacre spread, and a few days later Mustafa took Kyrenia without having to fire a shot. Famagusta, however, resisted with the Siege of Famagusta and put up a defense that lasted from September 1570 until August 1571.

The fall of Famagusta (with the death of venetian Marcantonio Bragadin) marked the beginning of the Ottoman period in Cyprus.

Two months later, the naval forces of the Holy League, composed mainly of Venetian, Spanish, and Papal ships under the command of Don John of Austria, defeated the Turkish fleet at the Battle of Lepanto in one of the decisive battles of world history. The victory over the Turks, however, came too late to help Cyprus, and the island remained under Ottoman rule for the next three centuries.

In 1570, the Turks first occupied Cyprus, and Lala Mustafa Pasha became the first Turkish Governor of Cyprus, challenging the claims of Venice. Simultaneously, the Pope formed a coalition between the Papal States, Malta, Spain, Venice and several other Italian states, with no real result. In 1573 the Venetians left, removing the influence of the Roman Catholic Church. 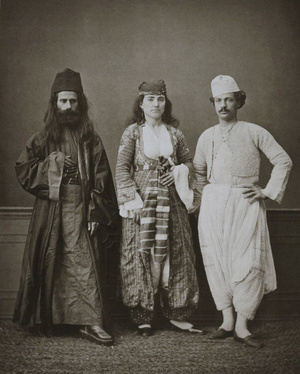 Traditional clothing of (from right to left) a Christian resident of Ammochostos (Famagusta, Cyprus), a Christian woman of Magossa, and a Greek monk of the Monastery of Tchiko (Kykkos), near Lefka. Photo of 1873.

The Ottoman occupation brought about two radical results in the history of the island. Since the Phoenicians in the 9th century BC, a new ethnic element appeared, the Turks. The population of Cyprus, Greeks, had now a new ruler: the Ottomans.

The Ottoman Empire gave timars—land grants—to soldiers under the condition that they and their families would stay there permanently. An action of far-reaching importance because the predefined soldiers became the nucleus of the island's Turkish community. During the 17th century the Turkish population grew rapidly, partly by conversion. Most of the Turks who had settled on the island during the three centuries of Ottoman rule remained when control of Cyprus—although not sovereignty—was ceded to Britain in 1878. Many, however, left for Turkey during the 1920s. By 1970, ethnic Turks represented 18% of the total population of the island, with ethnic Greeks representing the remainder[citation needed]. The distinction between the two groups was by both religion and language. 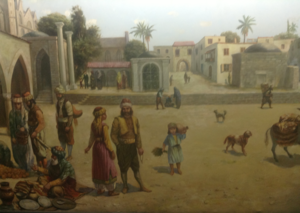 Turkish Cypriots in the walled city of Famagusta.

The Ottomans applied the millet system to Cyprus, which allowed religious authorities to govern their own non-Muslim minorities. This system reinforced the position of the Orthodox Church and the cohesion of the ethnic Greek population. Gradually the Archbishop of Cyprus became not only religious but ethnic leader as well, something the Ottoman Turks promoted, wanting to have somebody responsible for the loyalty of the Greek flock. In this way the Church undertook the task of the guardian of the Greek cultural legacy, although diminished since the country's independence.

Following the Ottoman conquest, many Greek Cypriots and Latins, in order to escape heavy taxation, converted to Islam. Many Greek Cypriots who had been officially converted to Islam remained actually Christians in secret. They were normally called Linobambaki. According to a view expressed for the first time in 1863, and then adopted in the following years, this word was taken metaphorically from a cloth woven with linen and cotton and which had two different sides corresponding thus to the two aspects of their faith. The Linobambaki turned up during daytime as Muslims, and in the evenings they appeared as Christians, keeping to Christianity, its customs and its habits.

The inhabitants of Cyprus, disappointed at the mismanagement of home affairs by the Ottoman governors, soon turned to outside powers in search for help for liberation. Very characteristic is the appeal by Archbishop Timotheos to Philip II of Spain for liberation of the island, in which, among other things, the following is stated:

There have recently been repeated cases of abuse on the part of the organs of the conqueror; in a greedy manner they attempt to confiscate and seize the property of the inhabitants; Christian houses are broken into and domiciles violated, and all sorts of dishonest acts against wives and daughters are committed. Twice until now churches and monasteries have been plundered, multiple and heavy taxes have been imposed whose collection is pursued by systematic persecutions, threats and tortures, which lead many persons to the ranks of Islam, while at the same time the male children of Cypriot families are seized (in order to form the brigades of Janissaries). This most hard practice is the worst of the sufferings to which the people of Cyprus is subjected by the Ottoman administration. 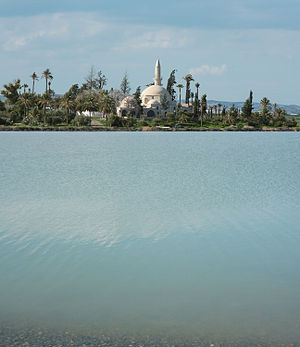 The Hala Sultan Tekke built in 1817 was one of many landmarks constructed by the Ottoman Turks in Cyprus.

Between 1572 and 1668, about 28 uprisings took place on the island and in many of these both Greeks and Turks (poor Turks were also exploited by the ruling class) took part. All of them ended in failure. 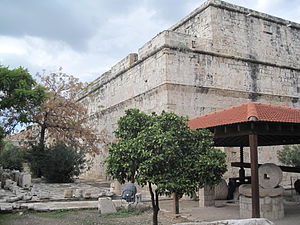 The Limassol Medieval Castle was rebuilt in 1590 by the Ottomans.

About 1660, in order to eliminate the greed of the Ottoman administration and stop the oppression and injustice against the people (who they called rayahs, sheep for milking), the Sultan recognised the Archbishop and the Bishops as "the protectors of people" and the representatives of the Sultan. In 1670, Cyprus ceased to be a pashalik for the Ottoman Empire and came under the jurisdiction of the Admiral of the Ottoman fleet. In his turn, the Admiral sent an officer to govern in his place.

In 1703 Cyprus came under the jurisdiction of the Grand Vizier who sent to the island a military and civil administrator. The title and function of this officer were awarded to the person who paid the highest amount of money in exchange. As a result, heavier taxation was imposed and the Cypriots became the subject of harder exploitation. About 1760 a combination of a plague epidemic, bad crops, and earthquakes drove many Cypriots to emigrate. In addition, the newly appointed Pasha doubled the taxes in 1764. In the end Chil Osman and 18 of his friends were killed by Greek and Turkish Cypriots alike but the two ethnic elements had to pay a huge sum of money to the Sultan and the families of the victims. It was assessed that each Christian had to pay 14 piastres and each Turk 7. The latter did not accept this judgement and broke into an open rebellion having Khalil Agha, the commander of the guard of the castle of Kyrenia as their leader. Finally the uprising was crushed and Khalil Agha was beheaded.

Many Greek Cypriots supported the Greek independence effort that began in 1821, leading to severe reprisals by the Ottoman Empire. The Greek War of Independence of 1821 had its repercussions on the situation in Cyprus. With the Sultan's consent, the Ottoman administration in the island under governor Küçük Mehmet, executed 486 Greek Cypriots on 9 July 1821, accusing them of conspiring with the rebellious Greeks. They included four Bishops, many clergymen and prominent citizens, who were beheaded in the central square of Nicosia, while Archbishop Kyprianos was hanged. The French consul M. Méchain reported on 15 September 1821 that the local pasha, Küçük Mehmet, carried out several days of massacres in Cyprus since July 9 and continued on for 40 days, despite the Vizier's command to end the plundering since 20 July 1821.

On 15 October 1821, a massive Turkish mob seized and hanged an Archbishop, five Bishops, thirty six ecclesiastics, and hanged most of the Greek and Turkish Cypriots in Larnaca and the other towns. By September 1822, sixty two Cypriot villages and hamlets had entirely disappeared.[7][8] The property of the Church was plundered and the Greek Cypriots were forced to pull down the upper storeys of their houses, an order that remained in force until the British put the island under their control almost sixty years later. When Greece became independent in 1829, many Cypriots sought the incorporation of Cyprus into Greece, but it remained part of the Ottoman Empire.

Between the years 1849 and 1878 Cyprus witnessed some slow change for the better in the administration section. District councils were set up and consisted of Greek and many Ottoman members. Many reforms, however, which were supposed to have been introduced were frustrated by unwilling administrators.

In 1878, three centuries of Ottoman rule came to an end. During their long presence on the island, the architectural remains left by the Turks included the small fort of Paphos dating to the late 16th century and largely based on a Lusignan plan, the tomb that was built where Umm Haram, a relative of Muhammad, died in the mid-7th century, which dates to the late 18th century and over which a tekke and a mosque were built 1816, and an aqueduct constructed by Abu Bekr Pasha in 1747 in order to bring fresh water to Larnaca. In Nicosia, the capital, there is a 16th-century inn called a Khan, a 17th-century Tekke of the Mevleri or the Dancing Dervishes and the Arab Ahmet Pasha mosque of the 18th century.

In 1869 the Suez Canal opened, and the United Kingdom of Great Britain and Ireland showed increasing interest in the island, which is situated in what had suddenly become a very convenient location. When the Turks were defeated by the Russians in 1877 and the Berlin Congress took place the next year in order to revise the treaty of St Stefano which was signed by Russia and the Ottoman Empire according to terms dictated by the former, it was officially announced on 9 July 1878 that on the 4th of preceding June, the British and the Sultan had secretly countersigned the Convention of Constantinople by virtue of which the possession and administration of Cyprus was vested in Great Britain. As exchange for control of Cyprus, the UK agreed to support Turkey in the Russian-Turkish war. This agreement was formalised as the Cyprus Convention.

After the Greek revolution of 1821 and the establishment of the Greek state, the Greek Cypriots expressed practically the wish of 'Union' with Greece, as it happened with the Ionian Islands and later with Crete.

This feeling of the Greek Cypriots began to be formed since the era of the Ottoman Rule and was expressed later at the time of the British occupation. These expectations for 'Union' were expressed by the 'Ethnarchy' (supreme ecclesiastical authority, which represented the Greek Cypriots in the political sector since the first moment of the British presence in Cyprus). The development of the 'Union' movement of the Greek Cypriots was a sequence of the close ties between Cyprus and Greece due to the common cultural and religious history. During the Ottoman period the manifestation of nationalism was clandestine and feeble due to oppression. On the contrary, during the British occupation, the freedom of expression allowed by the British gave the possibility to the Greek political and religious leaders to nurture the idea of 'Enosis' (Union). The demand for 'Enosis' was initially propounded by the Church and then by the politicians in the Legislative Council, and the various committees formed for the promotion of the national cause.