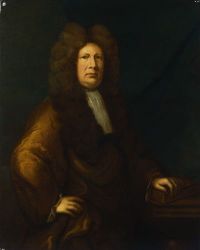 He was born in Constantinople, Turkey, where his father, Sir Peter Wyche, was the English Ambassador. He was educated at Christ Church, Oxford with Bachelor of Arts in 1653. He received his Master of Arts (MA) in 1655 and his Doctor of Civil Law (DCL) in 1665. Between the time he received his MA and his DCL, he was knighted (1660). This is so close in time to the English Restoration that he was almost certainly a Cavalier, and may have served in the military for the Royalist cause.