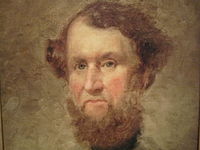 Cyrus Hall McCormick (February 15, 1809 – May 13, 1884) was an American inventor and founder of the McCormick Harvesting Machine Company, which became part of International Harvester Company in 1902.[2] From the Blue Ridge Mountains of Virginia, he and many members of his family became prominent residents of Chicago.

Although McCormick is credited as the "inventor" of the mechanical reaper, he based his work on that of many others, including Roman, Scottish and American men, more than two decades of work by his father, and the aid of Jo Anderson, a slave held by his family.[3] Cyrus McCormick filed patents for the invention, and his achievements were chiefly in the development of a company, marketing and sales force to market his products.

Cyrus McCormick was born February 15, 1809 in the Shenandoah Valley of Virginia. He was the eldest of eight children born to inventor Robert McCormick, Jr. (1780–1846) and Mary Ann "Polly" Hall (1780–1853). As Cyrus' father saw the potential of the design for a mechanical reaper, he applied for a patent to claim it as his own invention. He worked for 28 years on a horse-drawn mechanical reaper to harvest grain; however, he was never able to reproduce a reliable version.

Cyrus took up the project.[4] He was aided by Jo Anderson, an enslaved African American on the McCormick plantation at the time.[5] A few machines based on a design of Patrick Bell of Scotland (which had not been patented) were available in the United States in these years. The Bell machine was pulled by horses. The McCormick design was pulled by horses and cut the grain to one side of the team.

Cyrus McCormick held one of his first demonstrations of mechanical reaping at the nearby village of Steeles Tavern, Virginia in 1831. He claimed to have developed a final version of the reaper in 18 months. The young McCormick was granted a patent on the reaper on June 21, 1834,[6] two years after having been granted a patent for a self-sharpening plow.[7] However, none were sold, because the machine could not handle varying conditions.

The McCormick family also worked together in a blacksmith/metal smelting business. The panic of 1837 almost caused the family to go into bankruptcy when a partner pulled out. In 1839 McCormick started doing more public demonstrations of the reaper, but local farmers still thought the machine was unreliable. He did sell one in 1840, but none for 1841.

Using the endorsement of his father's first customer for a machine built by McPhetrich, Cyrus continuously attempted to improve the design. He finally sold seven reapers in 1842, 29 in 1843, and 50 in 1844. They were all built manually in the family farm shop. He received a second patent for reaper improvements on January 31, 1845.[6] 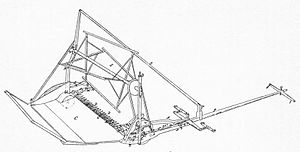 As word spread about the reaper, McCormick noticed orders arriving from farther west, where farms tended to be larger and the land flatter. While he was in Washington, DC to get his 1845 patent, he heard about a factory in Brockport, New York, where he contracted to have the machines mass-produced. He also licensed several others across the country to build the reaper, but their quality often proved poor, which hurt the product's reputation.[7]

In 1847, after their father's death, Cyrus and his brother Leander (1819–1900) moved to Chicago, where they established a factory to build their machines. At the time, other cities in the midwestern United States, such as Cleveland, Ohio, St. Louis, Missouri, and Milwaukee, Wisconsin, were more established and prosperous. Chicago had no paved streets at the time, but the city had the best water transportation from the east over the Great Lakes for his raw materials, as well as railroad connections to the farther west where his customers would be.[8]

When McCormick tried to renew his patent in 1848, the US Patent Office noted that a similar machine had already been patented by Obed Hussey a few months earlier. McCormick claimed he had really invented his machine in 1831, but the renewal was denied.[9] William Manning of Plainfield, New Jersey had also received a patent for his reaper in May 1831, but at the time, Manning was evidently not defending his patent.[6]

McCormick's brother William (1815–1865) moved to Chicago in 1849, and joined the company to take care of financial affairs. The McCormick reaper sold well, partially as a result of savvy and innovative business practices.[4] Their products came onto the market just as the development of railroads offered wide distribution to distant markets. McCormick developed marketing and sales techniques, developing a wide network of salesmen trained to demonstrate operation of the machines in the field, as well as to get parts quickly and repair machines in the field if necessary during crucial times in the farm year.

A company advertisement was a take-off of the Westward the Course of Empire Takes Its Way mural by Emanuel Leutze; it added to the title: "with McCormick Reapers in the Van."[10]

In 1851, McCormick traveled to London to display a reaper at the Crystal Palace Exhibition. After his machine successfully harvested a field of green wheat while the Hussey machine failed, he won a gold medal and was admitted to the Legion of Honor. His celebration was short-lived after he learned that he had lost a court challenge to Hussey's patent.[11]

Another McCormick Company competitor was John Henry Manny of Rockford, Illinois. After the Manny Reaper beat the McCormick version at the Paris Exposition of 1855, McCormick filed a lawsuit against Manny for patent infringement.[12] McCormick demanded that Manny stop producing reapers, and pay McCormick $400,000.

The trial, originally scheduled for Chicago in September 1855, featured prominent lawyers on both sides. McCormick hired the former US Attorney General Reverdy Johnson and New York patent attorney Edward Nicholl Dickerson. Manny hired George Harding and Edwin M. Stanton. Because the trial was set to take place in Illinois, Harding hired the local Illinois lawyer Abraham Lincoln. However, the trial was moved to Cincinnati, Ohio. Manny won the case, with an opinion by the State Supreme Court Judge John McLean.[13] Lincoln did not contribute to the defense. Stanton had objected to Lincoln's presence, referring to him as "that damned long armed ape."[14] After later being elected President, Lincoln chose Stanton as his Secretary of War.[14] See Abraham Lincoln's patent. 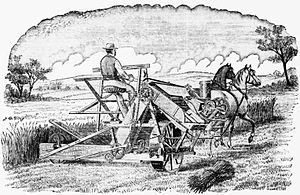 McCormick reaper and twine binder in 1884

In 1856, McCormick's factory was producing more than 4000 reapers each year, mostly sold in the Midwest and West. However, in 1861, Hussey's patent was extended but McCormick's was not. McCormick's outspoken opposition to Lincoln and the anti-slavery Republican party may not have helped his cause. McCormick decided to seek help from the US Congress to protect his patent.[15]

In 1871, the factory burned down in the Great Chicago Fire, but McCormick heeded his wife's advice to rebuild, and it reopened in 1873 even as McCormick's health declined, so she took a greater role in the family's business as well as philanthropic affairs. In 1879, brother Leander changed the company's name from "Cyrus H. McCormick and Brothers" to "McCormick Harvesting Machine Company".[16] He wanted to acknowledge the contributions of others in the family to the reaper "invention" and company, especially their father.[5] By this time, the reaper had been improved into a self-propelled combine, a machine able to harvest, and thresh grain from the vast flat fields of the far west.

On January 26, 1858, forty nine year old Cyrus McCormick married his secretary Nancy "Nettie" Fowler (1835–1923).[17] She was an orphan from New York who had graduated from the Troy Female Seminary and moved to Chicago. They had met two years earlier and shared views about business, religion and Democratic party politics.[18] They had seven children (many of whom ironically became active in Republican party politics):

McCormick had always been a devout Presbyterian, as well as advocate of Christian unity. He also valued and demonstrated in his life the Calvinist traits of self-denial, sobriety, thriftiness, efficiency, and morality. He believed feeding the world, made easier by the reaper, was part of his religious mission in life.

A lifelong Democrat, before the American Civil War, McCormick had published editorials in his newspapers, the Chicago Times and Herald, calling for reconciliation between the national sections. His views, however, were unpopular in his adopted home town. Although his invention helped feed Union troops, McCormick believed the Confederacy would not be defeated and he and his wife traveled extensively in Europe during the war. McCormick unsuccessfully ran for Congress as a Democrat with a peace-now platform in 1864, and was soundly defeated. He also proposed a peace plan to include a Board of Arbitration.[citation needed] After the war, McCormick helped found the Mississippi Valley Society, with a mission to promoted New Orleans and Mississippi ports for European trade. He also supported to annex Santa Domingo into the United States Beginning in 1872, McCormick served a four-year term on the Illinois Democratic Party's Central Committee.[17] McCormick later proposed an international mechanism to control food production and distribution.

McCormick also became the principal benefactor and a trustee of what had been the Theological Seminary of the Northwest, which moved to Chicago's Lincoln Park neighborhood in 1859, a year in which he endowed four professorships. The institution was renamed McCormick Theological Seminary in 1886, after his death, although it moved to Chicago's Hyde Park neighborhood in 1975 and began sharing facilities with the Lutheran School of Theology at Chicago.

In 1869, McCormick donated $10,000 to help Dwight L. Moody start the Young Men's Christian Association, and his son Cyrus Jr. would become the first president of the Moody Bible Institute.[18]

McCormick and later his widow, Nettie Day McCormick, also donated significant sums to Tusculum College, a Presbyterian institution in Tennessee, as well as to establish churches and Sunday Schools in the South after the war, even though that region was slow to adopt his farm machinery and improved practices. Also, in 1872, McCormick purchased a religious newspaper, the Interior, which he renamed the Continent and became a leading Presbyterian periodical.[17]

For the last 20 years of his life, McCormick was a benefactor and member of the board of trustees at Washington and Lee University in his native Virginia.[23] His brother Leander also donated funds to build an observatory on Mount Jefferson, operated by the University of Virginia and named the McCormick Observatory.

During the last four years of his life, McCormick became an invalid, after a stroke paralyzed his legs; he was able to walk during his final two years. He died at home in Chicago on May 13, 1884.[24] He was buried in Graceland Cemetery.[25] He was survived by his widow, Nettie, who continued his Christian and charitable activities, within the United States and abroad, between 1890 and her death in 1923, donating $8 million (over $160 million in modern equivalents) to hospitals, disaster and relief agencies, churches, youth activities and educational institutions, and becoming the leading benefactress of Presbyterian Church activities in that era.[18]

Numerous prizes and medals were awarded McCormick for his reaper, which reduced human labor on farms while increasing productivity. Thus, it contributed to the industrialization of agriculture as well as migration of labor to cities in numerous wheat-growing countries (36 by McCormick's death). The French government named McCormick an Officier de la Légion d'honneur in 1851, and he was elected a corresponding member of the French Academy of Sciences in 1878 "as having done more for the cause of agriculture than any other living man."[7]