From Infogalactic: the planetary knowledge core
Jump to: navigation, search
Not to be confused with Detent. For other uses, see Détente (disambiguation).

Détente (French pronunciation: ​[detɑ̃t], meaning "relaxation")[1] is the easing of strained relations, especially in a political situation. It is not to be confused with the Spanish near-homograph detente meaning "stop" (second person singular imperative).

The term is often used in reference to the general easing of the geo-political tensions between the Soviet Union and the United States which began in 1969, as a foreign policy of U.S. presidents Richard Nixon and Gerald Ford called détente; a "thawing out" or "un-freezing" at a period roughly in the middle of the Cold War. Détente was known in Russian as разрядка ("razryadka", loosely meaning "relaxation of tension").

The period was characterized by the signing of treaties such as SALT I and the Helsinki Accords. Another treaty, START II, was discussed but never ratified by the United States. There is still ongoing debate amongst historians as to how successful the détente period was in achieving peace.[2][3]

After the Cuban Missile Crisis of 1962, the two superpowers agreed to install a direct hotline between Washington D.C. and Moscow (the so-called red telephone), enabling leaders of both countries to quickly interact with each other in a time of urgency, and reduce the chances that future crises could escalate into an all-out war. The U.S./U.S.S.R. détente was presented as an applied extension of that thinking. The SALT II pact of the late 1970s continued the work of the SALT I talks, ensuring further reduction in arms by the Soviets and by the US. The Helsinki Accords, in which the Soviets promised to grant free elections in Europe, has been called a major concession to ensure peace by the Soviets.

Détente ended after the Soviet intervention in Afghanistan, which led to the United States boycott of the 1980 Olympics in Moscow. Ronald Reagan's election as president in 1980, based in large part on an anti-détente campaign,[4] marked the close of détente and a return to Cold War tensions. In his first press conference, president Reagan said "Détente's been a one-way street that the Soviet Union has used to pursue its aims."[5] 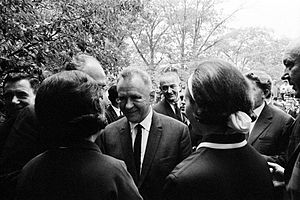 Soviet Premier Alexei Kosygin (in front) next to U.S. President Lyndon B. Johnson (behind) during the Glassboro Summit Conference.

The most obvious manifestation of détente was the series of summits held between the leaders of the two superpowers and the treaties that resulted from these meetings. In the early 1960s, before détente, the Partial Test Ban Treaty had been signed on August 5, 1963. Later in the decade, the Outer Space Treaty, January 1967, and the Nuclear Non-Proliferation Treaty, July 1968, were two of the first building blocks of détente. These early treaties were signed all over the globe.

The most important treaties were not developed until the Nixon Administration came into office in 1969. The Political Consultative Committee of the Warsaw Pact sent an offer to the West, urging them to hold a summit on "security and cooperation in Europe". The West agreed and talks began towards actual limits in the nuclear capabilities of the two superpowers. This ultimately led to the signing of the SALT I treaty in 1972. This treaty limited each power's nuclear arsenals, though it was quickly rendered out-of-date as a result of the development of MIRVs. In the same year that SALT I was signed, the Biological Weapons Convention and the Anti-Ballistic Missile Treaty were also concluded. Talks on SALT II also began in 1972.

Brezhnev however at the start of the period in his speeches to the Politburo, was intent on using the period of relaxed tensions to prepare for Soviet Expansion in the 1980s.[6]

In 1975, the Conference on Security and Cooperation in Europe met and produced the Helsinki Accords, a wide ranging series of agreements on economic, political, and human rights issues. The CSCE was initiated by the USSR, involving 35 states throughout Europe.[7] Among other issues, one of the most prevalent and discussed after the conference was that of human rights violations in the Soviet Union. The Soviet Constitution directly violated the Declaration of Human Rights from the United Nations, and this issue became a prominent point of separation between the United States and the Soviet Union.[8]

The Carter administration had been supporting human rights groups inside the Soviet Union, and Leonid Brezhnev accused the administration of interference in other countries' internal affairs.[8] This prompted intense discussion of whether or not other nations may interfere if basic human rights are being violated, such as freedom of speech and religion. The basic disagreement in the philosophies of a democracy and a single-party was in a state that did not allow for reconciliation of this issue. Furthermore, the Soviets proceeded to defend their internal policies on human rights by attacking American support of countries like South Africa and Chile, which were known to violate many of the same human rights issues.[8]

Leonid Brezhnev (left) and Richard Nixon (right) during Brezhnev's June 1973 visit to Washington; this was a high-water mark in détente between the United States and the Soviet Union.

In July of the same year, the Apollo-Soyuz Test Project became the first international space mission, wherein three American astronauts and two Soviet cosmonauts docked their spacecraft and conducted joint experiments. This mission had been preceded by five years of political negotiation and technical co-operation, including exchanges of US and Soviet engineers between the two countries' space centers.

Trade relations between the two blocs increased substantially during the era of détente. Most significant were the vast shipments of grain that were sent from the West to the Soviet Union each year, which helped make up for the failure of kolkhoz, Soviet collectivized agriculture.

At the same time, the Jackson–Vanik amendment, signed into law by Gerald Ford on January 3, 1975, after a unanimous vote by both houses of the United States Congress, was designed to leverage trade relations between the U.S. and the USSR, making the United States dependent upon improvements of human rights within the Soviet Union, in particular allowing refuseniks to emigrate; it added to the Most Favoured Nation status a clause that provided that no countries resisting emigration could be awarded this status. This provided Jackson with a method of linking geopolitics to human rights.[9]

As direct relations thawed, increased tensions continued between the superpowers through their surrogates, especially in the Third World. Conflicts in South Asia, and the Middle East in 1973, saw the Soviet and U.S. backing their respective surrogates with war material and diplomatic posturing. In Latin America, the United States continued to block any leftward electoral shifts in the region by supporting right-wing military coups. During much of the early détente period, the Vietnam War continued to rage. Neither side trusted the other fully and the potential for nuclear war remained constant.

The Soviet invasion of Afghanistan that was to shore up a struggling allied regime led to harsh criticisms in the west and a boycott of the 1980 Summer Olympics, which were to be held in Moscow. Jimmy Carter boosted the U.S. defense budget and began financially aiding the President of Pakistan, General Muhammad Zia-ul-Haq, who would in turn subsidize the anti-Soviet Mujahideen fighters in the region.

The 1980 American presidential election saw Ronald Reagan elected on a platform opposed to the concessions of détente. Negotiations on SALT II were abandoned.