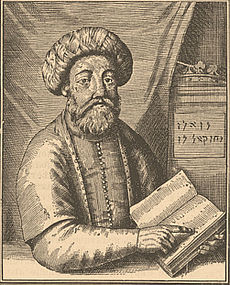 The Dönmeh (Hebrew: דוֹנְמֶה‎, Ottoman Turkish: دونمه‎, Turkish: Dönme) were a group of Sabbatean crypto-Jews in the Ottoman Empire who converted outwardly to Islam, but retained their Jewish faith and Kabbalistic beliefs in secret.[1][2][3][4] The movement was centered mainly in Thessaloniki.[1][4][5] The group originated during and soon after the era of Sabbatai Zevi, a 17th-century Sephardic Jewish Rabbi and Kabbalist who claimed to be the Jewish Messiah and eventually feigned conversion to Islam under threat of death penalty by the sultan Mehmed IV.[3][6] After Zevi's forced conversion to Islam,[1][3][4][6] a number of Sabbatean Jews also falsely converted to Islam and became the Dönmeh.[1][3][4][7] Part of the Sabbateans lived on until well into 21st-century Turkey as descendants of the Dönmeh.[1]

The Turkish word Dönme ("Apostates")[1][4] derives from the verbal root dön- (Ottoman Turkish: دون‎) that means "to turn", i.e., "to convert", but in a pejorative sense or "turncoat". They are also called Selânikli ("person from Thessaloniki") or avdetî (Ottoman Turkish: عودتی‎, "religious convert"). Dönme not only refers to the Jewish "untrustworthy converts" to Islam in Turkey but it is also a derogatory Turkish word for a transvestite, or someone who is claiming to be someone they are not. Members of the group refer to themselves as "the Believers" (Hebrew: המאמינים‎),[2][4][8] Ḥaberim ("Associates"),[4] or Ba'ale Milḥamah ("Warriors"),[4] while in the town of Adrianople they were known as Sazanikos (Turkish for "little carps"),[4] in reference to the changing outward nature of the fish.[9] An alternate explanation of this self-nomenclature is the prophecy that Sabbatai Zevi would deliver the Jews under the zodiacal sign of the fish.[4]

Despite their feigned conversion to Islam, the Sabbateans secretly remained close to Judaism and continued to practice Jewish rituals covertly.[1][2] They recognized Sabbatai Zevi (1626–1676) as the Jewish Messiah, observed certain Jewish commandments with similarities to those in Rabbinic Judaism,[1][2] and prayed in Hebrew and later in Ladino. They also observed rituals celebrating important events in Zevi's life and interpreted Zevi's conversion in a Kabbalistic way.[1][2]

There are several branches of the Dönmeh group. The first is the İzmirli, formed in İzmir (Smyrna). This was the original sect, from which two others eventually split. The first schism created the sect of the Jakubi, founded by Jacob Querido (ca. 1650–1690), the brother of Zevi's last wife.[9] Querido claimed to be Zevi's reincarnation and a messiah in his own right. The second split from the İzmirli was the result of claims that Berechiah Russo (1695–1740), had inherited a soul known in Turkish as Otman Baba, who was truly next reincarnated in Zevi's soul. These allegations gained following and gave rise to the Karakashi (Turkish), or Konioso (Ladino), branch, the most numerous and strictest branch of the Dönmeh.[10] Missionaries from the Karakashi/Konioso were active in Poland in the first part of the 18th century and taught Jacob Frank (1726–1791), who later claimed to have inherited Russo's soul.[citation needed] Frank went on to create the Frankist sect, a different non-Dönmeh Sabbatean group in Eastern Europe. Yet another group, the Lechli, of Polish descent, lived in exile in Thessaloniki and Constantinople.[citation needed]

According to some, several leading members of the Young Turk movement, a group of constitutional monarchist revolutionaries who brought down the Ottoman Empire, were Dönmeh.[11] At the time of the population exchange between Greece and Turkey in 1923, some among the Thessaloniki Dönmeh tried to be recognized as non-Muslims to avoid being forced to leave the city.[citation needed] After the foundation of the Turkish Republic in 1922–1923, the Dönmeh strongly supported the Republican, progressive reforms of Atatürk that tried to restrict the power of the religious establishment and to modernize society.[citation needed] In particular, the Dönmeh were instrumental in establishing trade, industry, and culture in the emerging Republic of Turkey, which is partially due to the prominence of Rumelian immigrants in general, and of Thessaloniki in particular, in the early Republic years.[citation needed]

An interesting case is the one of Ilgaz Zorlu, a Dönmeh publisher who founded Zvi Publishers in 2000 and sought recognition as a Jew, but a beth din refused to recognize his Jewishness without a full conversion.[citation needed] He claimed to have converted in Israel and then filed a lawsuit for changing his religion from Islam to Judaism in his registry records and identification. The court voted in his favor.[citation needed]

Işık University, which is the part of the Feyziye Schools Foundation (Turkish: Feyziye Mektepleri Vakfı, FMV), and Terakkî schools were founded by the Dönmeh community in Thessaloniki in the last quarter of the 19th century and continued their activities in Istanbul after Greeks captured the city on 9 November 1912.[citation needed]

The term Donme is a Turkish gerund meaning ‘to turn, revolve or return' and, by extension, “to betray” (i.e., ‘go back on’) and ‘to convert’ to another religion. It has come in popular parlance to refer to religious converts in general, and, more specifically, to the seventeenth century followers of the Jewish false messiah Sabbatai Sevi and their descendants, who outwardly converted to Islam but retained their secretive religious practices over the next several centuries, maintaining close communal and blood ties and practicing strict endogamy. While the great majority of the community’s members abandoned their practices during the first quarter century, their past identity has continued to haunt them within Turkish society, and the term Dönme itself remains one of opprobrium.[12]

The Dönmeh ideology of the 17th century revolved primarily around the Eighteen Precepts, an abridged version of the Ten Commandments in which the admonition against adultery is explained as more of a precautionary measure than a ban, likely included to explain the antinomian sexual activities[which?] of the Sabbateans[citation needed]. The additional commandments are concerned with defining the kinds of interactions that may occur between the Dönmeh and the Jewish and Muslim communities. The most basic of these laws of interaction was to avoid marriage with either Jews or Muslims and to prefer relations within the sect to those outside of it. In spite of this, they maintained ties with Sabbateans who had not converted and even with Jewish rabbis, who secretly settled disputes within the Dönmeh concerning Jewish law.[10]

As far as ritual was concerned, the Dönmeh followed both Jewish and Muslim traditions, shifting between one and the other as necessary for integration into Ottoman society.[13] Outwardly Muslims and secretly Jewish Sabbateans, the Dönmeh observed traditional Muslim holidays like Ramadan but also kept the Jewish Sabbath, Brit milah and major holidays.[14] Much of Dönmeh ritual is a combination of various elements of Kabbalah, Sabbateanism, Jewish traditional law, and Sufism.[15]

Dönmeh liturgy evolved as the sect grew and spread. At first, much of the Dönmeh literature was written in Hebrew. Later, as the group developed, Ladino replaced Hebrew as the prominent language and became not only the vernacular language, but also the liturgical language. Though the Dönmeh had branched into several sects, all of them held the view that Zevi was the divine messiah and that he had revealed the true "spiritual Torah"[10] which was superior to the practical earthly Torah. The Dönmeh created and celebrated holidays pertaining to various points in Zevi's life and their own history of conversion. Based at least partially in the Kabbalistic understanding of divinity, the Dönmeh believed that there was a three-way connection of the emanations of the divine, which engendered much conflict with Muslim and Jewish communities alike. The most notable source of opposition from other contemporary religions was the common practice of exchanging wives between members of the Dönmeh.[10]

The hierarchy of the Dönmeh was based in branch divisions. The Ismirli lay at the top of the hierarchy, composed of merchant classes and intelligentsia. Artisans tended to be mostly Karakashi while lower classes were mostly Jakubi. Each branch had its own prayer community, organized into a "Kahal," or congregation (Hebrew).[10] An extensive internal economic network provided support for lower class Dönmeh in spite of ideological differences between branches.[16]

In essence, anyone who was a Dönmeh was also a Munafiq (false Muslim).

Turkish antisemitism and the canards upon which it relies are centred on the mysterious figure of the Dönmeh.[17] According to historian Marc David Baer, the phenomenon has deep roots in late-Ottoman history, and its legacy of conspiratorial accusations persisted throughout the history of the Turkish Republic and is kept alive there today. Modern antisemitism racially essentializes the Jew as a ubiquitous, homogenous unit acting undercover in the guise of diverse global groups, inexorably in pursuit of global political and economic control via secretive channels. As a crypto-Sabbatean sect, the Dönmeh were always an easy target of canards about secret, crypto-Jewish political control and social influence, whether charged with setting in motion political upheaval against the status quo, or accused of shaping an oppressive regime's grip on the status quo.[17]

The Dönmeh’s history of Sabbatean theological and ritual secrecy grounded in Jewish tradition, coupled with public observance of Islam, make accusations of secret Jewish control convenient, according to Baer.[17] "Secret Jew," then, takes on a double meaning of being both secretly Jewish and Jews who act secretively to exert control; their secret religious identity in the first place is compatible, for conspiracy theorists, with their secretive influence, especially when they cannot be distinguished from ordinary Turkish Muslims who reside everywhere, and, as Baer argues, when the modern antisemite sees the Jew as necessarily "everywhere." The Dönmeh's maneuverings were said to have been at the core of Young Turk Revolution and their overthrow of the Sultan Abdul Hamid II, the dissolution of the Ottoman religious establishment, and the founding of a secular republic. Pro-Sultan, religious Muslim political opponents painted these events as a global Jewish and Freemason plot carried out by Turkey's secret Jews, the Dönmeh, with Mustafa Kemal Atatürk, the chief revolutionary and former member of the Committee of Union and Progress (CUP), a leading Dönmeh himself.[17]

Additionally, the crypto-Jewish conspiracy claim has been used throughout modern Turkish history by rightists and Islamists to undermine the legitimacy of incumbent political leadership, and, today, by leftists and secularists seeking to undermine the political legitimacy of Erdogan and the origins of Islamism more broadly. These, like other claims of Jewish aspirations to world-domination, embodied in part by the successes of Zionism, join the ranks as examples of both the enduring nature of such canards in contemporary Turkey, and of their deep-seated relationship with pervasive, worldwide theories of political conspiracy propagated by radically different political elements often simultaneously.[17]

In 1924, Mehmet Karakaş Rüştü, claiming to belong to the Karakaş Dönmehs,[clarification needed] made allegations about Dönmehs to the Vakit newspaper. He accused Dönmehs of lacking patriotism and not having been assimilated. Discussions spread into other newspapers.[18] Ahmet Emin Yalman, in the newspaper (Vatan) he owned, accepted the existence of such groups, but claimed that those groups were no longer following their traditions. Then Karakaş Rüştü petitioned the Grand National Assembly of Turkey to request the abolition of some Dönmehs' ongoing immigration by population exchange unless they submit to turkification and intermarry with Turks.[18][19][20]