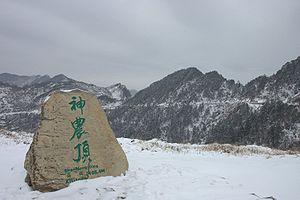 On top of the Shennong Peak

Daba Mountains, or Dabashan (Chinese: 大巴山; pinyin: Dàbā Shān) is a mountain range in the Central of China, north of the Yangtze River.It cut through a total of four provinces in China, which are" Sichuan,Chongqing,Shaanxi and Hubei." Its length is about 1,000 kilometres (620 mi).

The Daba Mountains run in the general west-northwest to east-southeast direction, along the border between, on the one side (southwest and south) Sichuan and Chongqing, and on the other side (northeast and north) Shaanxi and Hubei. The mountains of Shennongjia are often considered the easternmost section of the Daba Range. 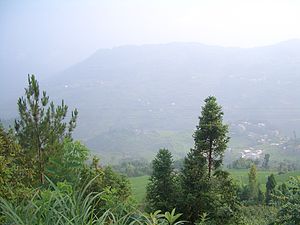 The southern slope of the Daba Mountains drains into the Sichuan Basin or directly into the Yangzte via short streams that flow into the river in the Three Gorges area, such as the Shen Nong Stream. The northern side drains into the Han River, a major tributary of the Yangtze, which, however, does not join the Yangtze until some hundreds kilometers to the east (in Wuhan).

The natural landscape of the region, the Daba Mountains evergreen forests, is listed by the World Wildlife Fund (WWF) as one of the world's 200 ecoregions that should be a priority for conservation.[2] Dabashan National Nature Reserve is located in the Chongqing part of the Daba Mountains (Chengkou County); Shennongjia Mountain Nature Reserve (704 square kilometres (272 sq mi)[2]), in Hubei (Shennongjia Forestry District).

The Dawn Redwood (Metasequoia glyptostroboides) is a deciduous conifer endemic to the Daba Shan, whose nearest living relatives are the Coast Redwood and Giant Sequoia of California. Redwoods formerly ranged across the northern hemisphere, but were thought to be extinct outside California until stands of Dawn Redwood were discovered in the Daba Shan in the 1940s.[2]

Plants of the Daba Mountains

Presently, terraced agriculture is expanded in the Daba Mountains. A widely planted cash crop is the Eucommia tree, a medicinal plant.[3]