The Dabie Mountains (Chinese: 大别山; pinyin: Dàbié Shān) are a major mountain range located in central China. Running northwest-to-southeast, they form the main watershed between the Huai and Yangtze rivers. The range also marks the boundary between Hubei Province and its neighbors of Henan (to the north) and Anhui (to the east). 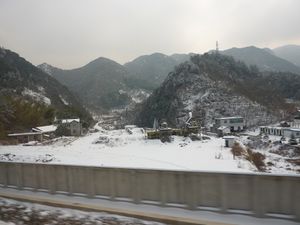 The range is heavily forested (about 85% coverage) and yields valuable bamboo as well as oak, particularly cork oak, making it China's chief cork-producing area. The region is very poor, and subsistence agriculture is the heart of its economy with rice and tea predominating.

The main transportation route across the higher range is from Macheng in Hubei to Huangchuan in Hunan, through the Huai River valley. The main rail and road crossings go north from Wuhan, through the lower elevations.

In 2009, the high-speed Hewu Passenger Railway opened, connecting Hefei (capital of Anhui) with Wuhan (capital of Hubei) along a short direct route. It uses a number of tunnels when crossing the Dabie range.

Geologically, the range is a complex, stressed structure, making it and the surrounding area subject to earthquakes. In late 2005, a 5.7 magnitude earthquake centered in the northwest corner of Jiangxi province, just south of Jiujiang on the Yangtze killed at least 15 people, injured hundreds, and left several thousand people homeless. It caused tremors in Qichun County in Hubei province and beyond, even reaching as far as the provincial capital of Wuhan.