Dagenham is a large suburb of east London, England.[1] It forms part of the London Borough of Barking and Dagenham and is located approximately 11.5 miles (18.5 km) east of Charing Cross and around 9.5 miles (15.2 km) east of the City of London. Historically in Essex, it was an agrarian village and remained mostly undeveloped until 1921, when the London County Council began construction of the large Becontree estate. The population of the area significantly increased during the 20th century, with the parish of Dagenham becoming an urban district in 1926 and a municipal borough in 1938. It has formed part of Greater London since 1965 and is a predominantly residential area, with some areas of declining industrial activity, including the Ford Dagenham plant. The southern part of Dagenham is also known as South Romford and is also adjacent to the River Thames, forms part of the London Riverside section of the Thames Gateway redevelopment area. Dagenham had a population of 43,362 in 2011.

Dagenham first appeared in a document (as Dæccanhaam) in a charter of Barking Abbey dating from 666 AD. The name almost certainly originated with a small farmstead, the "ham" or farm of a man called Daecca, as Dæccan hamm in Old English means home of a man called Dæcca.[2] 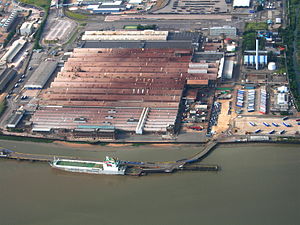 In 1931 the Ford Motor Company relocated from Trafford Park in Manchester, to a plant in Dagenham, which was already the location of supplier Briggs Motor Bodies. A 500-acre (2 km²) riverside site was developed to become Europe's largest car plant, a vast vertically integrated site with its own blast furnaces and power station, importing iron ore and exporting finished vehicles. By the 1950s Ford had taken over Briggs at Dagenham and its other sites at Doncaster, Southampton, Croydon and Romford. At its peak the Dagenham plant had 4 million square feet (371600 m²) of floor space and employed 40,000.[3]

On 20 February 2002, full production was discontinued due to overcapacity in Europe and the relative difficulty of upgrading the 60-year-old site compared with other European sites such as Almussafes (Valencia, Spain) and Cologne. Other factors leading to the closure of the Auto-assembly line were the need of the site for the new Diesel Centre of Excellence, which produces half of Ford's Diesel Engines worldwide, and the UK employment laws when compared to Spanish, German and Belgian laws. In 2005 Cummins went into a joint venture and offered $15 million (US) to reinstate the factory. Ford and Cummins offered a good redundancy package, billed as one of the best in UK manufacturing. It is the location of the Dagenham wind turbines.[4] Some 4,000 people now work at the Ford plant.[5] The movie Made in Dagenham (2010) is a dramatisation of the 1968 Ford sewing machinists strike at the plant, when female workers walked out in protest against sexual discrimination and unequal pay.

Sterling Ltd who were famous for manufacturing British Army weapons and Jaguar car parts were also based in Dagenham until they went bankrupt in 1988. Other industrial names once known worldwide were Ever Ready, whose batteries could be found in shops throughout the Commonwealth, Bergers Paint and the chemical firm of May and Baker who in 1935 revolutionized the production of antibiotics with their synthetic sulfa-drug known as M&B 693. The May & Baker plant, owned and run by Sanofi-Aventis, occupies a 108-acre site in Rainham Road South, near Dagenham East tube station. It was abandoned in 2013 when the company closed this plant. The council has decided how to use the vacant site. They will redevelop it with a new shopping centre: stores announced so far are a Sainsbury's supermarket and a pub restaurant. More stores will be announced in the future.

Dagenham was an ancient, and later civil, parish in the Becontree hundred of Essex.[6] The Metropolitan Police District was extended in 1840 to include Dagenham. The parish formed part of the Romford Rural District from 1894.[7][8] Dagenham Parish Council offices were located on Bull Street.

The expansion of the Greater London conurbation into the area caused the review of local government structures, and it was suggested in 1920 that the Dagenham parish should be abolished and its area divided between Ilford Urban District and Barking Town Urban District.[9] Separately, the London County Council proposed that its area of responsibility should be expanded beyond the County of London to cover the area.[10] Instead, in 1926 the Dagenham parish was removed from the Romford Rural District and designated as an urban district.[7] In 1938, in further recognition of its development, Dagenham became a municipal borough.[11] In 1965 the Municipal Borough of Dagenham was abolished and its former area became part of the London Borough of Barking,[12] which is now known as Barking and Dagenham.[13] 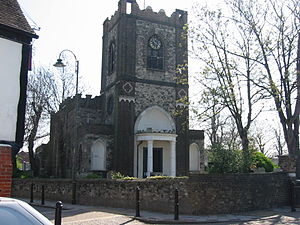 In 1205 Dagenham was large enough to have a chaplain, and the Parish Church of St Peter and St Paul was probably built at around that time.[14] In 1854, the London, Tilbury and Southend Railway was built through the south of Dagenham, near the River Thames. In 1885 a new direct route from Barking to Pitsea, via Upminster, was built with Dagenham station opened just north of the village. Dagenham Dock station opened on the original southern route in 1908. Dagenham was still an undeveloped village, when building of the vast Becontree estate by the London County Council began in the early 1920s.[15] The building of the enormous council estate, which also spread into the neighbouring parishes of Ilford and Barking,[9] caused a rapid increase in population.[16] In 1932 the electrified District line of the London Underground was extended to Upminster through Dagenham with stations opened as Dagenham and Heathway and today called Dagenham East and Dagenham Heathway.[17] Dagenham East was the location of the Dagenham East rail crash in 1958.[18] Services on the London Tilbury & Southend line at Dagenham East were withdrawn in 1962. 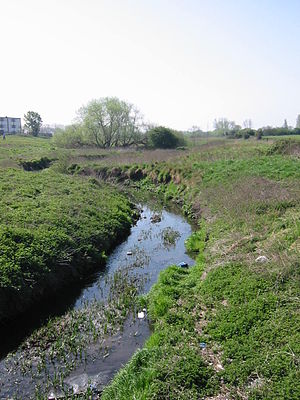 The River Beam in the south of Dagenham

Dagenham is located approximately 11.5 miles (18.5 km) east of Charing Cross in Central London. A large part of Dagenham is within the Becontree estate; however, the area also includes Becontree Heath, part of Rush Green, Old Dagenham village, and the southern section around Dagenham Dock and adjacent to the River Thames. This southern section, which includes Ford Dagenham, is part of the London Riverside section of the Thames Gateway redevelopment zone. The Dagenham post town includes the whole of the Becontree estate, including those sections that were constructed in Barking and Ilford.

Dagenham is a diverse working class area, owing in part to the influx of African, Asian and Eastern European migrants.[19] It is difficult to approximate the population of Dagenham alone since it was merged with Barking as part of the formation of Greater London in 1965.

At the time of the 2011 census, the white British population of Dagenham was 49.5%, with the largest minority groups considering themselves Asian British and Black British.[20]

There are London Underground services from Becontree, Dagenham East and Dagenham Heathway. C2c, currently operated by National Express, part of National Rail, run a service from Dagenham Dock.[21] National Rail services also operate from nearby Chadwell Heath as well as TfL Rail services which were introduced when it transferred to the management of London Overground Rail Operations in preparation for Crossrail. 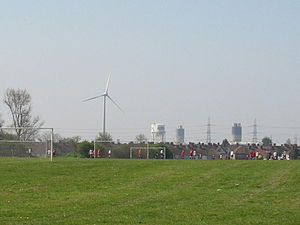 Valence House is in Becontree Avenue. It is the only surviving of the five manor houses of Dagenham.[24] Dating back to the 13th century it is sited in parkland and is partially surrounded by a moat. Valence House is the borough's local history museum, displaying an impressive collection of artifacts and archives that tell the story of the lives of the people of Barking and Dagenham. The collection also includes portraits, family papers and other mementoes of the Fanshawe family, who occupied Parsloes Manor, since demolished, from the sixteenth century.[25] The Fanshawe collection is "one of the best collections of gentry portraits in the country and is of international importance," according to Valence House.[26] Among members of the Fanshawe family was the diplomat Sir Richard Fanshawe, 1st Baronet, whose portrait is at Valence House. Nine successive members of the Fanshawe family served as Remembrancer to the Crown, following Henry Fanshawe's appointment to the position by Queen Elizabeth I in 1566. The appointment made possible the family's rise to prominence.

On the corner of Whalebone Lane and the Eastern Avenue, diagonally opposite the Moby-Dick public house, is the site of Marks Manor House, a large 15th century moated building demolished in the early 19th century. The adjoining fields were used during World War II by the Royal Artillery as an anti-aircraft battery before being converted into a Prisoner of War camp for Germans. Further south down Whalebone Lane on the corner of the High Road is the Tollgate pub. This stands on the site of the milestone which marked the ten mile (16 km) limit from the City of London and the turnpike toll-gate.

Dagenham & Redbridge F.C., based in Dagenham, are currently playing in the Football League Two having been relegated in the 2010/2011 season from the Football League One which they had reached having been promoted as playoff-winners of League two after beating Rotherham United F.C. 3-2. Prior to this, they were the Nationwide Conference champions in the 2006/7 season. They play at the London Borough of Barking & Dagenham Stadium, on Victoria Road.

Motorcycle speedway was staged at the greyhound stadium in Ripple Road in the mid to late 1930s. The club run events focussed on training but a team called the Dagenham Daggers did take part in local competitions. It is possible that the venture was operational as early as 1931 a meeting at Caxton (Cambridgeshire) was advertised as Caxton Speedway v Dagenham Speedway.

Dagenham's leading cricket club Goresbrook Cricket Club are based at the May & Baker Sports Club in Rainham Road South, in 2011 the club won the Essex County Cricket League for the first time in its history.

Dagenham has a King George's Field in memorial to King George V. The park, which has been in existence for over a century, was renamed in 1953 by Queen Elizabeth II. Dagenham also has many other parks such as Valence and Parsloes. Dagenham Crusaders Drum and Bugle Corps, founded by John Johnson, were the first British Drum Corps and performed in America for the first time in 1983. They have recently reformed to perform for DCUK's 30th anniversary, and in 2010 are fielding a competitive corps for the first time in 22 years.

The town is also home to the Dagenham Girl Pipers, a bagpipe marching band founded in 1930 by the Rev Joseph Waddington Graves.

Main article: List of people from Barking and Dagenham