Daggerboards are often long and thin, thus providing a better lift-to-drag ratio. Daggerboards are usually found in small craft such as day sailers, where their size is easily handled by a single person. Daggerboards are not usually ballasted, but are locked in place by a clip. They are raised vertically unlike a centreboard which can be set at different angles to the hull of the boat.

When a daggerboard is extended through the keel, it improves a ship's stability. Daggerboards can be raised when the a ship enters a shallow harbor, allowing the boat (for example) to load and unload cargo in locations that would not otherwise be accessible to larger ships.[1]

One problem with such boats is that if one were to hit shore, it would be quite easily damaged.

If a daggerboard is located off center, then it is called a leeboard or a bilgeboard. An analog to a centerboard on a dinghy are bilgeboards (they exist in pairs, but are used singly) in a Scow.

The centerboard, daggerboard or bilgeboard can be used as a recovery platform upon which to stand, providing increased leverage, in the event the dinghy overturns via a capsize or turtle.

The Mirror Dinghy, Laser, and Vanguard 15 use a daggerboard.

In 2008, a 55-foot-long (17 m) daggerboard ship was found in Lake Ontario, using deep scan sonar equipment off the lake's southern shore, the only one known to have been found in the Great Lakes. Vessels of this type were used for a short time in the early 19th century.[1]

According to one source[2] there are only four non-custom manufacturers of catamarans which use daggerboards: Catana, Outremer, Sud Composites, and Dolphin. One reason might be its construction cost, estimated to be about $30,000 for a 45-foot (14 m) catamaran. However, there is a large number of custom and semi-custom catamaran builders who offer daggerboards as an option. 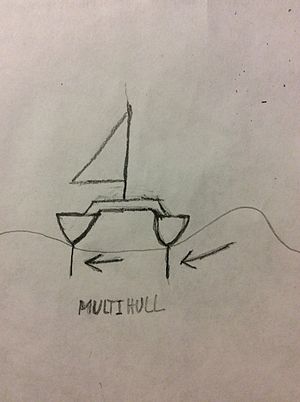 Catamarans are steady because of the multihull with daggerboards 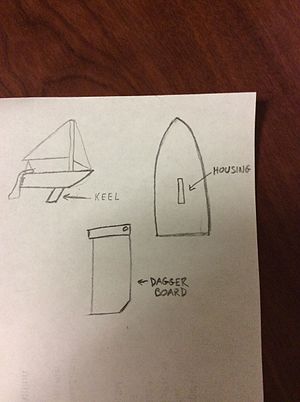 A daggerboard is a vertically removable keel that travels through the hull of the rig along its center line usually in midsection. In the early 19th century daggerboards were rarely being used on schooners. A schooner is an American ship with two or more masses. These schooners were used for nearby coastal trade of cotton, wheat and apples. A sunken 1833 daggerboard schooner was found in the great lakes with the help of sonar equipment.[3] Knowing this, daggerboards have been around since late the 17th century. Daggerboards can be found on monohulls which is the classic sailboat and multihulls called catamarans. During in an event which a sailboat flips on its side the keel can be used to up right it back where it belongs by standing on the keel while pulling the sail in your direction. Of course up righting a sailboat is easier with smaller rigs. Daggerboards come in all different shapes and sizes, some curved or s- shaped. Many high performance sailing vessels use curved or angled daggerboards to create vertical lift to reduce displacement. Some vessels with vertically lifting daggerboards are capable lifting their completely from the water while others only lift the hull partially from the water. Examples of sailing vessels with such daggerboards include the America's Cup yacht USA 17 (yacht) and James H. Clark's 100-foot Super-maxi, Comanche.

The purpose of the daggerboard is to grip the water and keep the boat from being blown in the direction of the wind. It gives stability and provides lift. Lift is important so the nose of the rig rides up so it doesn’t drag as much through the water. Without a daggerboard the boat cannot go anywhere up wind.[4] Generally daggerboards are used on smaller rigs such as 10 to 40 feet for racing. It mostly based off personal preference, whether or not you actually want a dagger board. Daggerboards are faster than fixed keels because fixed keels have so much hydrodynamic drag by the shape. The shape can resemble an airplane wing which is aerodynamic. Monohulls allow the sailor to tack much quicker than catamarans. Tacking is where a sailboat wants to go up wind, but it cannot go directly into the wind so It goes in a zigzag pattern till the destination is reached.

A daggerboard is a removable keel that comes out vertically from its housing. Theses boards were made out of wood; the problem with wood is it floats. An alternate material that is great for daggerboards are metal (aluminum/steel) and fiberglass. The process in making a daggerboard rig is that it is very costly. If not well made the annoying sound of a rattle form the board trunk can destroy the interest of sailing. Dagger boards are fragile and will break if hit against a rock. The difference between daggerboards from centerboards and keels are it is removable. Centerboards are mechanically pivoted on a pin causing the board to swing into the hull of the boat. The advantage of it doing that is when you are sailing over shallow reef it won’t snap the board as if it were a fixed keel or daggerboard.[4] Curved dagger boards started to appear thirty- forty years ago. The first prototype was made in 1985 by Ian Farrier. The benefits of vertical lift of the curved daggerboard on rigs showed on paper. When actually sailing curved daggerboards do not have a drastic change.[6]