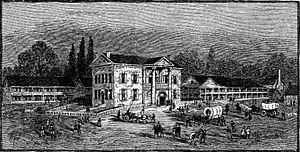 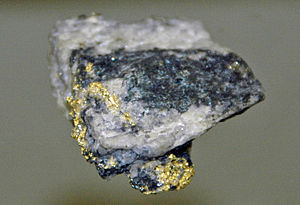 Dahlonega is located at the north end of Georgia 400, which connects Atlanta to many suburbs to the north. It is consistently named as a best place to retire by many different publications[5] due to its low cost of living, vibrant activities, continuing education for seniors, festivals, and beautiful setting.

In 1828 Dahlonega was the site of the first major gold rush in the United States. The Dahlonega Gold Museum Historic Site stands in the middle of the town square, housed in the old Lumpkin County Courthouse built in 1836. From its steps in 1849, Dahlonega Mint assayor Dr. M. F. Stephenson tried to persuade miners to stay in Dahlonega instead of joining the California Gold Rush, saying, "There's millions in it," famously misquoted as "There's gold in them thar hills."[citation needed]

Dahlonega is home to a campus of the University of North Georgia.

This area was occupied by indigenous peoples for thousands of years before European contact. When European American settlers arrived, it was the traditional territory of the historical Cherokee Nation.

In 1829, Dahlonega became the site of the first major gold rush in the USA and became a boom town in the Georgia Gold Rush.

Dahlonega was home to many Creeks and Cherokees. There are a few Creek and Cherokee descendants in Dahlonega today, though they are not in communities but scattered throughout the area[citation needed]. Most of the descendants are Cherokee mixed. Names like Corn, Davis, Chambers, Dover, Chattin and Bird are of Cherokee blood. Surnames like Thrasher are of Creek blood. Though not afforded state or federal recognition[citation needed], these families still hold onto who they are as Cherokee and Creek people. The Cherokee called the area Talonega, which means yellow; George Featherstonhough, an English geologist who visited the town in 1837, observed that the courthouse was built upon a broad expanse of hornblende slate "and that the soil of the public square was impregnated with small specks of gold."[6]

The spelling of the Cherokee word Da-lo-ni-ge-i was disputed by early correspondents[citation needed], with Featherstonhough, for example, calling it "Tahlonekay."[7]

Since 1977, the state recognized tribe has been known as the Georgia Tribe of Eastern Cherokee.[citation needed]

Numerous gold mines were illegally developed in the area. Miners, entering illegally into the Cherokee Nation lands, came into conflict with the Cherokee, whose territory they had trespassed. The Cherokee lands were defined by the treaty between the Federal Government and the Cherokee Nation in the Treaty of Washington 1819. The miners raised political pressure against the Cherokee because they wanted to get the gold. The Federal Government forced the Native Americans west of the Mississippi River to Oklahoma on the Trail of Tears during Indian Removal. Dahlonega was founded two years before the Treaty of New Echota 1835, which made its founding a violation of the Treaty of Washington of 1819.[8][9] 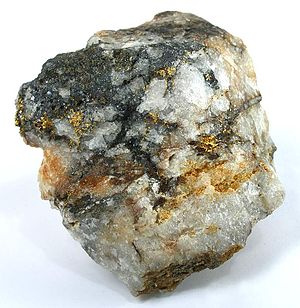 Historic specimen of High-grade gold ore from the Dahlonega mines

The United States Mint built a branch mint here, which it operated from 1838–1861. The Dahlonega Mint, like the one established in 1838 in Charlotte, North Carolina, only minted gold coins, in denominations of $1.00, $2.50 (quarter eagle), $3.00 (1854 only) and $5.00 (half eagle). This was cost effective in consideration of the economics, time, and risk of shipping gold to the main mint in Philadelphia, Pennsylvania. The Dahlonega Mint was a small operation, usually accounting for only a small fraction of the gold coinage minted annually in the US.

The government decided against re-opening the facility after the Civil War. By then, the U.S. government had established a mint in San Francisco, California. Given the large amount of gold discovered in California from the late 1840s on, that mint handled the national needs of gold mint production.

As a result, surviving Dahlonega coinage is today highly prized in American numismatics. The mint building burned in 1878. The North Georgia College campus built Price Memorial Hall on its foundation.[13] The building has a gold-leaf steeple to refer to the history of the site.

In recent years, Dahlonega and Lumpkin County have been recognized as "the heart of the North Georgia Wine Country". The county features five vineyards and wineries that attract many tourists.

Dahlonega is home to the Holly Theatre.

This court house, built in 1836, replaced the small structure used since the establishment of Lumpkin County in 1832. The town was named Dahlonega in October, 1833, for the Cherokee word Talonega meaning "golden."

From its steps in 1849, Dr. M.F. Stephenson, assayer [sic] at the Mint, attempted to dissuade Georgia miners from leaving to join the California Gold Rush. His oration gave rise to the sayings: "There's millions in it," and "Thar's gold in them thar hills."[15]

According to the United States Census Bureau, the city has a total area of 6.4 square miles (17 km2), all of it land.

There were 1,060 households out of which 23.4% had children under the age of 18 living with them, 41.1% were married couples living together, 9.3% had a female householder with no husband present, and 46.4% were non-families. 31.5% of all households were made up of individuals and 10.9% had someone living alone who was 65 years of age or older. The average household size was 2.31 and the average family size was 2.96.

The Lumpkin County School District holds pre-school to grade twelve, and consists of three elementary schools, a middle school, and a high school.[19] The district has 215 full-time teachers and over 3,511 students.[20]

See also: List of twin towns and sister cities in the United States

Dahlonega is twinned with: