DTS was founded as Evangelical Theological College in 1924 by Dr. Lewis Sperry Chafer, who taught the first class of 13 students, and William Henry Griffith Thomas,[3][4] who was to have been the school's first theology professor but died before the first classes began. Their vision was a school where expository Bible preaching was taught simply, and under Chafer's leadership, DTS pioneered one of the first four-year degrees in theology, the Master of Theology (Th.M.). The present location of the school was purchased in 1926 and Doctor of Theology (Th.D.) programs were started in 1927.[5] Chafer remained president until his death in 1952.

DTS has continually published a quarterly entitled Bibliotheca Sacra since 1934. In 1983, a complete collection of "Bib Sac" articles was published as a book commemorating fifty years of the journal.[6]

Dr. John F. Walvoord, himself a graduate, took over as president in 1953 after Chafer's death in 1952. In 1974, DTS added a two-year Master of Arts (MA) program in biblical studies, and in 1982, a two-year program in Christian Education was begun. In addition to these, a Doctor of Ministry (D.Min.) program was opened in 1980. Walvoord retired as DTS president in 1986.[4]

DTS graduate Dr. Chuck Swindoll was then president of the school from 1994 to 2001, and now serves as the school's Chancellor. Since 2001, Dr. Mark Bailey has served as president.[4] Under Bailey's tenure, the seminary added a two-year MA program in media and communication, a two-year MA in Christian leadership, a Spanish D.Min. program, and a multi-lingual online education program.

As of Spring 2014, DTS has over 15,000 alumni serving in various ministerial capacities in 97 countries worldwide.[2]

DTS was first accredited in 1944 by the Board of Regents, State Education Department of the University of the State of New York of Albany.[7] After that institution stopped granting out of state accreditation, DTS was accredited in 1969 by the Southern Association of Colleges and Schools and in 1994 by the Association of Theological Schools in the United States and Canada.[8]

The school is also a member of the Association of Christian Schools International (ACSI), the Evangelical Training Association (ETA), the Jerusalem University College, and the Institute of Theological Studies (ITS).[8] 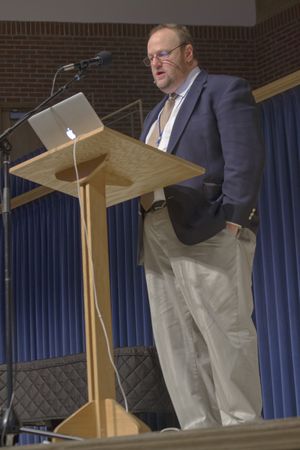 DTS is known as a center of modern Dispensational teaching[9][10][11][12][13] due to Dr. Chafer's development of a systematic theology which approaches the Bible with a "premillennial, dispensational interpretation of the Scriptures."[3] His eight-volume work describing this approach to theology, Systematic Theology, was first published in 1948 and is still a required textbook for some courses at DTS.[3]

Notable theological beliefs of the school include: premillennialism, dispensationalism, and Biblical inerrancy. The faculty, while still subscribing to dispensationalism, represents varying perspectives reflecting the development that occurred in that school of thought in the last few decades of the twentieth century. The school considers itself non-denominational within Protestantism, and has classes in every one of the 66 books of the Bible.[8]

In a 2009 study conducted by LifeWay Research, Protestant pastors named preachers who had most influenced them. Three DTS alumni were among the top ten: Chuck Swindoll ('63), founder of radio broadcast Insight for Living; David Jeremiah ('67), founder of Turning Point Radio and Television Ministries; and Andy Stanley ('85), founder of North Point Ministries.[14][15] Other notable individuals associated with the seminary include: