locally (help·info)) is a union territory in India. Its capital is Daman. 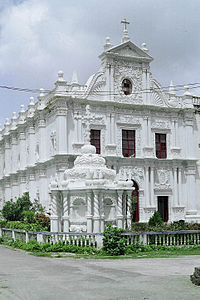 For over 450 years, the coastal enclaves of Daman (Portuguese: Damão) and Diu on the Arabian Sea coast were part of Portuguese India, along with Goa and Dadra and Nagar Haveli. Goa, Daman and Diu were incorporated into the Republic of India on December 19, 1961, by military conquest. Portugal did not recognize the Indian annexation of these territories until 1974.

Gujarati (as spoken by the native Damaniya people), Marathi (dominating neighboring Maharashtra), English (not a colonial raj import here) and Hindi are the official languages used in the territory.[2][3][4] English is increasingly accepted for official purposes. Warli and Agri, dialects of Konkani, are also used.

The use of Portuguese (the early colonial import) is in decline and relegated to home use or as a liturgical language as it is no longer taught in schools. It is also no longer used by the media and it is not endorsed by the government. Standard Portuguese existing in a post-creole continuum with Daman and Diu Portuguese is spoken by about 10,000–12,000 people in Daman.

The Catholics are pastorally served by the Metropolitan Roman Catholic Archdiocese of Goa and Daman, which has its see in Goa and is the primatial see of all India.

According to the Constitution of India, Administration of Daman and Diu is carried out by an Administrator, appointed by the President of India as an agent of the President, not a head of state/government or a governor. Previously, this post was held by Shri B. S. Bhalla, IAS officer (1990 batch). He was assisted by a number of other officers in carrying out his duty. Currently, this post is held by Ashish Kundra.

Daman and Diu's gross state domestic product for 2005 was estimated at US $156 million in current prices.

Daman and Diu are well connected by roads, and are 12 km from Vapi, 125 km from Surat, and 150 km from Mumbai. Daman isn't actually connected by railway but Vapi is, with all major cities. The nearest airport is Mumbai. Diu Airport has commercial air services, while Daman has an Indian Navy air base.