Damask (Arabic: دمسق‎‎) is a reversible figured fabric of silk, wool, linen, cotton, or synthetic fibres, with a pattern formed by weaving. Damasks are woven with one warp yarn and one weft yarn, usually with the pattern in warp-faced satin weave and the ground in weft-faced or sateen weave. Twill damasks include a twill-woven ground or pattern.[1][2]

The production of damask was one of the five basic weaving techniques—the others being tabby, twill, lampas, and tapestry—of the Byzantine and Islamic weaving centres of the early Middle Ages.[3] Damasks derive their name from the city of Damascus—in that period a large city active both in trading (as part of the silk road) and in manufacture.[4] Damasks became scarce after the 9th century outside of Islamic Spain, but were revived in some places in the 13th century.[3]

The word "damask" first appeared in records in a Western European language in the mid-14th century in French.[5] By the 14th century, damasks were being woven on draw looms in Italy. From the 14th to 16th century, most damasks were woven in one colour with a glossy warp-faced satin pattern against a duller ground. Two-colour damasks had contrasting colour warps and wefts, and polychrome damasks added gold and other metallic threads or additional colours as supplemental brocading wefts. Medieval damasks were usually woven in silk, but weavers also produced wool and linen damasks.[2] 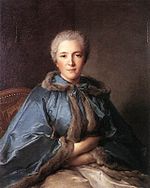 Modern damasks are woven on computerized Jacquard looms.[1] Damask weaves are commonly produced in monochromatic (single-colour) weaves in silk, linen, or synthetic fibres such as rayon and feature patterns of flowers, fruit, and other designs. The long floats of satin-woven warp and weft threads cause soft highlights on the fabric which reflect light differently according to the position of the observer. Damask weaves appear most commonly in table linens and furnishing fabrics, but they are also used for clothing. The Damask weave is used extensively throughout the fashion industry due to its versatility and high-quality finish. Damask is usually used for mid-to-high-quality garments, meaning the label tends to have a higher definition and a more “expensive” look.