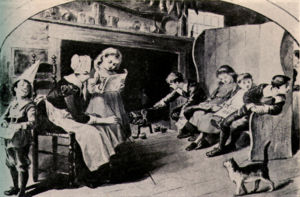 A Dame school was an early form of a private elementary school in English-speaking countries. They were usually taught by women and were often located in the home of the teacher.

Dame schools were first mentioned in literature in the 16th century. They were private schools at the lowest end of the spectrum. The establishments were quite varied—some functioned primarily as day care facilities overseen by illiterate women, while others provided their students with a good foundation in the basics. The inadequacies of dame schools in England were illustrated by a study conducted in 1838 by the Statistical Society of London that found nearly half of all pupils surveyed were only taught spelling, with a negligible number being taught mathematics and grammar. Around 1843, the quoted fee in Middlesex was 5s. a week while the common school[clarification needed] (private) would charge 11s. There were also free schools, run mainly by the Church of England, and other fee-paying schools operated commercially. Many children just went to Sunday Schools that were run by every Christian denomination.[1] After the Health and Morals of Apprentices Act in 1802, apprentices were guaranteed daily education for 4 years within the factory, but this did not apply to 'free children'[clarification needed] working there.

Dame schools became less common in Britain after the introduction of compulsory education by the Elementary Education Act 1870: under that Act schools that were found to be below government-specified standards of tuition could be closed.

In North America, "dame school" is a broad term for a private school with a female teacher during the 17th, 18th, and 19th centuries. The education provided by these schools ranged from basic to exceptional.[5] The basic type of dame school was more common in New England, where basic literacy was expected of all classes, than in the southern colonies, where there were fewer educated women willing to be teachers.[6]

Motivated by the religious needs of Puritan society and their own economic needs, some colonial women in 17th century rural New England opened small, private schools in their homes to teach reading and catechism to young children. An education in reading and religion was required for children by the Massachusetts School Law of 1642. This law was later strengthened by the famous Old Deluder Satan Act. According to Puritan beliefs, Satan would assuredly try to keep people from understanding the Scriptures, therefore it was deemed that all children be taught how to read. Dame schools fulfilled this requirement if parents were unable to educate their young children in their own home. For a small fee, women, often housewives or widows, offered to take in children to whom she would teach a little writing, reading, basic prayers, and religious beliefs. These women received "tuition" in coin, home industries, alcohol, baked goods, and other valuables. Teaching materials generally included, and often did not exceed, a hornbook, primer, Psalter, and Bible.[7] Both girls and boys were provided education through the dame school system. Dame schools generally focused on the four R's of education-Riting, Reading, Rithmetic, and Religion.[8] In addition to primary education, girls in dame schools might also learn sewing, embroidery, and other "graces".[9] Most girls received their only formal education from dame schools because of sex-segregated education in common or public schools during the colonial period.[10] If their parents could afford it, after attending a dame school for a rudimentary education in reading, colonial boys moved on to grammar schools where a male teacher taught advanced arithmetic, writing, Latin, and Greek.[11]

The first school in Australia, started in 1789, was a Dame school in which children were taught basics by a convict, Isabella Rossen.