Damião de Góis (Portuguese pronunciation: [dɐmiˈɐ̃w̃ dɨ ˈɡɔjʃ]) (February 2, 1502 – January 30, 1574), born in Alenquer, Portugal, was an important Portuguese humanist philosopher. He was a friend and student of Erasmus. He was appointed secretary to the Portuguese factory in Antwerp in 1523 by King John III of Portugal. He compiled one of the first accounts on Ethiopian Christianity.

Góis (also Goes) was born in Alenquer, Portugal, into a noble family who served the Portuguese kings – the grandfather, Gomes Dias de Góis, had been in the entourage of Prince Henry the Navigator. Around 1518 Góis joined the court of King Manuel I of Portugal. Under Manuel I’s successor, King John III of Portugal, in 1523, he was sent to Antwerp, as secretary and treasurer of the Portuguese feitoria (factory, trading post and commercial office). Henceforth, Góis travelled intensely (Poland, Lithuania, Denmark, Germany, Sweden, France, England, Italy), entering into contact with a number of important figures, like Sebastian Münster, Erasmus (who hosted him in Freiburg), Ramusio, Philipp Melanchthon, Thomas More and Martin Luther. Among the many Portuguese acquaintances, Góis was friend of the writers João de Barros and André de Resende. A humanist and an open mind, Góis followed courses at the Universities of Padua and Leuven, wrote on various topics, like the condition of the Sami people (Lapps), and translated some classic works – among them, Cicero’s Cato maior de senectute – into Portuguese. He was also a composer of some musical pieces and kept a private collection of paintings.

Góis translated into Latin a Portuguese opuscle on the Ethiopian embassy of the Armenian Mateus (the representative of the Negus Dawit II) to Portugal (1532), which also included the famous "Letter of Prester John" written by the Ethiopian Queen Eleni (1509) and a "Confessio illorum fidei".

In 1538 he published a translation of the Biblical book Ecclesiastes in Portuguese, though it was not widely circulated. In the same year, he took a Dutch wife, Joana de Hargen. In 1540 he published the famous Fides, religio, moresque Aethiopum. The book received a widespread diffusion in Europe, in both Catholic and Protestant circles, and enjoyed of successive editions (Paris-1541, Leuven-1544, Leiden-1561, Cologne-1574). It also earned the author, however, the criticisms of the powerful Portuguese Cardinal Henry of Portugal, who, as Grand Inquisitor of the Portuguese Inquisition, banned its circulation in the kingdom. The Jesuit order proved equally critical, as he was accused by the Provincial superior Simão Rodrigues of Lutheranism, and of being a disciple of Erasmus, before the Inquisition.

He was settled at Louvain, then the literary centre of the Low Countries, when the French besieged the town in 1542. He was given the command of the defending forces, and saved Louvain, but was taken prisoner and confined for nine months in France, till he obtained his freedom by a heavy ransom. He was rewarded, however, by a grant of arms from Charles V. He finally returned to Portugal in 1545, with a view of becoming tutor to the king's son, but he failed to obtain this post, owing to the accusations before the Inquisition.[1]

In 1548, Góis was named Guarda Mor (High Guardian) of the Torre do Tombo (Royal Archives) and ten years later was entrusted by the same Cardinal Henry to write the chronicle of Manuel I’s reign. The task has been previously confided to de Barros, but relinquished by him.[1] The work was completed in some seven years and became his major achievement; nonetheless it was widely attacked and parts of it were significantly censored.[2] He also published a description of the city of Lisbon – Urbis Olisiponis Descriptio (1554).

In 1570 the inquisitorial process opened again, sending Góis to reclusion in the monastery of Batalha. He died shortly after in Alenquer under mysterious circumstances (apparently, murder), free but sick, and was buried in the church of Nossa Senhora da Varzea.[1] Góis had eight sons. 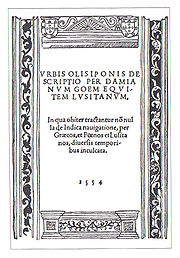