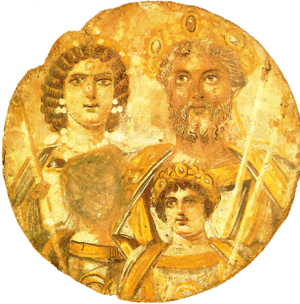 The Severan Tondo, a circa AD 199 tondo of the Severan family, with portraits of Septimius Severus, Julia Domna, Caracalla, and Geta. Geta's face has been erased, because of the damnatio memoriae ordered by his brother.

Damnatio memoriae is the Latin phrase literally meaning "condemnation of memory" in the sense of a judgment that a person must not be remembered. It was a form of dishonor that could be passed by the Roman Senate upon traitors or others who brought discredit to the Roman State. The intent was to erase someone from history, a task somewhat easier in ancient times, when documentation was much sparser. 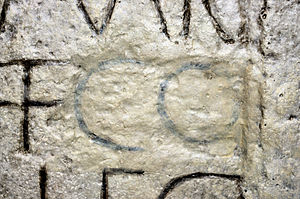 Damnatio memoriae of 'Commodus' on an inscription in the Museum of Roman History Osterburken. The abbreviation ‘CO’ was later restored with paint.

The sense of the expression damnatio memoriae and of the sanction is to cancel every trace of the person from the life of Rome, as if he or she had never existed, in order to preserve the honour of the city. In a city that stressed the social appearance, respectability and the pride of being a true Roman as a fundamental requirement of the citizen, it was perhaps the most severe punishment.

Though in Latin, the term damnatio memoriae was not used by the ancient Romans. The first appearance of the phrase is in a dissertation written in Germany in 1689. The term is used in modern scholarship to cover a wide array of official and unofficial sanctions whereby the physical remnants of a deceased individual were destroyed to differing degrees.[1][2]

Lucius Aelius Sejanus suffered damnatio memoriae following a failed conspiracy to overthrow emperor Tiberius in 31. His statues were destroyed and his name obliterated from all public records. The above coin from Augusta Bilbilis, originally struck to mark the consulship of Sejanus, has the words L. Aelio Seiano obliterated.

In Ancient Rome, the practice of damnatio memoriae was the condemnation of Roman elites and emperors after their deaths. If the Senate or a later emperor did not like the acts of an individual, they could have his property seized, his name erased and his statues reworked. Because there is an economic incentive to seize property and rework statues, historians and archaeologists have had difficulty determining when official damnatio memoriae actually took place, although it seems to have been quite rare.

Historians sometimes use the phrase de facto damnatio memoriae when the condemnation is not official. Examples of this may include the destruction of the statues and other images of two close members of Caligula's family, his wife Milonia Caesonia and his daughter Julia Drusilla, which occurred after the emperor was assassinated.

Among those few who did suffer legal damnatio memoriae were Sejanus, who had conspired against emperor Tiberius in 31, and later Livilla, who was revealed to be his accomplice. Only three emperors are known to have officially received a damnatio memoriae. These were Domitian whose violent death in 96 ended the Flavian Dynasty, the co-emperor Publius Septimius Geta, whose memory was publicly expunged by his co-emperor brother Caracalla after he murdered him in 211, and in 311 Maximian, who was captured by Constantine the Great and then encouraged to commit suicide.

It is unknown whether any damnatio memoriae was totally successful as it would not be noticeable to later historians, since, by definition, it would entail the complete and total erasure of the individual in question from the historical record. However it was difficult to implement the practice completely. For instance, the Senate wanted to condemn the memory of Caligula, but Claudius prevented this. Nero was declared an enemy of the state by the Senate, but then given an enormous funeral honoring him after his death by Vitellius. While statues of some emperors were destroyed or reworked after their death, others were erected. Also, many coins with the images of the discredited person continued to circulate. A particularly large number exist with Geta's image.[3]

Similar practices in other societies 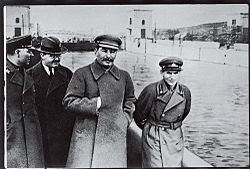 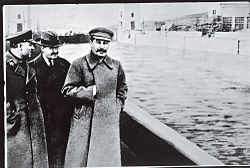 A photograph of Stalin with Soviet commissar Nikolai Yezhov was retouched after Yezhov fell from favor and was executed in 1940.

Many contemporary novels and films mention a form of damnatio memoriae. Two early examples are the "vapourization" of "unpersons" in George Orwell's 1949 dystopian novel Nineteen Eighty-Four ("He did not exist; he never existed"); and the reference to the Egyptian practice in the 1956 movie The Ten Commandments, in which the Pharaoh Seti orders the name of Moses be struck from every building and never mentioned by anyone.[citation needed]

More recent authors who have used damnatio memoriae as a plot device include Milan Kundera in his 1979 novel The Book of Laughter and Forgetting, R.A. Salvatore in the 1990 novel Homeland, Lois Lowry in her 1993 novel The Giver (a version in which the damned name is never given to any new baby ever again), and Brian Herbert and Kevin J. Anderson in their 1999 Prelude to Dune trilogy.[citation needed]