He was best known for his short stories celebrating the world of Broadway in New York City that grew out of the Prohibition era. To New Yorkers of his generation, a "Damon Runyon character" evoked a distinctive social type from the Brooklyn or Midtown demi-monde. The adjective "Runyonesque" refers to this type of character as well as to the type of situations and dialog that Runyon depicted.[4] He spun humorous and sentimental tales of gamblers, hustlers, actors, and gangsters, few of whom go by "square" names, preferring instead colorful monikers such as "Nathan Detroit", "Benny Southstreet", "Big Jule", "Harry the Horse", "Good Time Charley", "Dave the Dude", or "The Seldom Seen Kid." His distinctive vernacular style is known as "Runyonese": a mixture of formal speech and colorful slang, almost always in present tense, and always devoid of contractions. He is credited with coining the phrase "Hooray Henry", a term now used in British English to describe an upper-class, loud-mouthed, arrogant twit.

Runyon's fictional world is also known to the general public through the musical Guys and Dolls based on two of his stories, "The Idyll of Miss Sarah Brown" and "Blood Pressure".[5] The musical additionally borrows characters and story elements from a few other Runyon stories, most notably "Pick The Winner." The film Little Miss Marker (and its two remakes, Sorrowful Jones and the 1980 Little Miss Marker) grew from his short story of the same name.

Runyon was also a well-known newspaper reporter, covering sports and general news for decades for various publications and syndicates owned by William Randolph Hearst. Already famous for his fiction, he wrote a well-remembered "present tense" article on Franklin Delano Roosevelt's Presidential inauguration in 1933 for the Universal Service, a Hearst syndicate, which was merged with the co-owned International News Service in 1937. 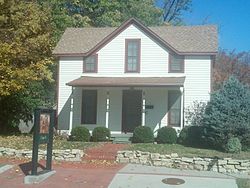 Damon Runyon was born Alfred Damon Runyan to Alfred Lee and Elizabeth (Damon) Runyan.[6] His relatives in Manhattan, Kansas included several newspapermen.[7] His grandfather was a newspaper printer from New Jersey who had relocated to Manhattan, Kansas in 1855, and his father was editor of his own newspaper in the town. In 1882 Runyon's father was forced to sell his newspaper, and the family moved westward. The family eventually settled in Pueblo, Colorado in 1887, where Runyon spent the rest of his youth. By most accounts, he attended school only through the fourth grade.[8] He began to work in the newspaper trade under his father in Pueblo. In present-day Pueblo, Runyon Field, the Damon Runyon Repertory Theater Company, and Runyon Lake are named in his honor.

In 1898, when still in his early teens, Runyon enlisted in the U.S. Army to fight in the Spanish–American War. While in the service, he was assigned to write for the Manila Freedom and Soldier's Letter.

After his military service, he worked for various Colorado newspapers, beginning in Pueblo. His first job as a reporter was in September 1900, when he was hired by the Pueblo Star;[9] he then worked in the Rocky Mountain area during the first decade of the 1900s: at the Denver Daily News, he served as "sporting editor" (what would today be called "sports editor") and then worked as a staff writer. His expertise was in covering the semi-professional teams in Colorado; he even briefly managed a semi-pro team in Trinidad, Colorado.[10] At one of the newspapers where he worked, the spelling of his last name was changed from "Runyan" to "Runyon", a change he let stand.

After a notable failure in trying to organize a Colorado minor baseball league, which lasted less than a week,[11] Runyon moved to New York City in 1910. In his first New York byline, the American editor dropped the "Alfred" and the name "Damon Runyon" appeared for the first time. For the next ten years he covered the New York Giants and professional boxing for the New York American.

He was the Hearst newspapers' baseball columnist for many years, beginning in 1911, and his knack for spotting the eccentric and the unusual, on the field or in the stands, is credited with revolutionizing the way baseball was covered. Perhaps as confirmation, Runyon was inducted into the writers' wing (the J. G. Taylor Spink Award) of the Baseball Hall of Fame in 1967. He is also a member of the International Boxing Hall Of Fame and is known for dubbing heavyweight champion James J. Braddock, the "Cinderella Man". Runyon frequently contributed sports poems to the American on boxing and baseball themes, and also wrote numerous short stories and essays.

If I have all the tears that are shed on Broadway by guys in love, I will have enough salt water to start an opposition ocean to the Atlantic and Pacific, with enough left over to run the Great Salt Lake out of business. But I wish to say I never shed any of these tears personally, because I am never in love, and furthermore, barring a bad break, I never expect to be in love, for the way I look at it love is strictly the old phedinkus, and I tell the little guy as much.

One year, while covering spring training in Texas, he met Pancho Villa in a bar and later accompanied the unsuccessful American expedition into Mexico searching for Villa. It was while he was in Mexico that he met the young girl whom he eventually married.

Gambling, particularly on craps or horse races, was a common theme of Runyon's works, and he was a notorious gambler himself. One of his paraphrases from a well-known line in Ecclesiastes ran: "The race is not always to the swift, nor the battle to the strong, but that's how the smart money bets."

A heavy drinker as a young man, he seems to have quit drinking soon after arriving in New York, after his drinking nearly cost him the courtship of the woman who became his first wife, Ellen Egan. He remained a heavy smoker.

His best friend was mobster accountant Otto Berman, and he incorporated Berman into several of his stories under the alias "Regret, the horse player." When Berman was killed in a hit on Berman's boss, Dutch Schultz, Runyon quickly assumed the role of damage control for his deceased friend, correcting erroneous press releases (including one that stated Berman was one of Schultz's gunmen, to which Runyon replied, "Otto would have been as effective a bodyguard as a two-year-old."). 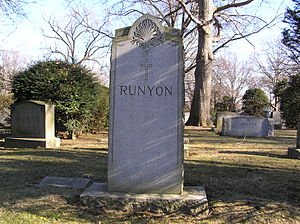 The family plot of Damon Runyon in Woodlawn Cemetery

Runyon's marriage to Ellen Egan produced two children (Mary and Damon, Jr.), but broke up in 1928 over rumors that Runyon had become infatuated with Patrice Amati del Grande, a Mexican woman he had first met while covering the Pancho Villa raids in 1916 and discovered once again in New York, when she called the American seeking him out. Runyon had promised her in Mexico that if she would complete the education he paid for her, he would find her a dancing job in New York. She became his companion after he separated from his wife. After Ellen Runyon died of the effects of her own drinking problems, Runyon and Patrice married; that marriage ended in 1946 when Patrice left Runyon for a younger man.

Runyon died in New York City from throat cancer in late 1946, at age 66. His body was cremated, and his ashes were illegally scattered from a DC-3 airplane over Broadway in Manhattan by Captain Eddie Rickenbacker on December 18, 1946.[12] The family plot of Damon Runyon is located at Woodlawn Cemetery in The Bronx, New York.

File:Breach of promise by Nicolas Bentley.png
An illustration from "Breach of Promise" showing Spanish John and Harry the Horse

Frank Muir comments[18] that Runyon's plots were, in the manner of O. Henry, neatly constructed with professionally wrought endings, but their distinction lay in the manner of their telling, as the author invented a peculiar argot for his characters to speak. Runyon almost totally avoids the past tense (English humourist E.C. Bentley thought there was only one instance, and was willing to "lay plenty of 6 to 5 that it is nothing but a misprint"[19] but "was" appears in the short stories "The Lily of St Pierre"[20] and "A Piece of Pie";[21] "had" appears in "The Lily of St Pierre",[20] "Undertaker Song"[22] and "Bloodhounds of Broadway"[23]), and makes little use of the future tense, using the present for both. He also avoided the conditional, using instead the future indicative in situations that would normally require conditional. An example: "Now most any doll on Broadway will be very glad indeed to have Handsome Jack Madigan give her a tumble." (Guys and Dolls, "Social error"). E. C. Bentley[24] comments that "there is a sort of ungrammatical purity about it [Runyon's resolute avoidance of the past tense], an almost religious exactitude." There is an homage to Runyon that makes use of this peculiarity (Chronic Offender by Spider Robinson) which involves a time machine.

He uses many slang terms (which go unexplained in his stories), such as:

There are many recurring composite phrases such as:

E. C. Bentley notes[25] that Runyon's "telling use of the recurrent phrase and fixed epithet" demonstrates a debt to Homer.

Runyon's stories also employ occasional rhyming slang, similar to the cockney variety but native to New York (e.g.: "Miss Missouri Martin makes the following crack one night to her: 'Well, I do not see any Simple Simon on your lean and linger.' This is Miss Missouri Martin's way of saying she sees no diamond on Miss Billy Perry's finger." (from "Romance in the Roaring Forties"))

The comic effect of his style results partly from the juxtaposition of broad slang with mock-pomposity. Women, when not "dolls", "Judies", "pancakes", "tomatoes", or "broads", may be "characters of a female nature", for example. He typically avoided contractions such as "don't" in the example above, which also contributes significantly to the humorously pompous effect. In one sequence, a gangster tells another character to do as he's told, or else "find another world in which to live."

Runyon's short stories are told in the first person by a protagonist who is never named, and whose role is unclear; he knows many gangsters and does not appear to have a job, but he does not admit to any criminal involvement, and seems to be largely a bystander. He describes himself as "being known to one and all as a guy who is just around".[26]

There are many collections of Runyon's stories: in particular Runyon on Broadway and Runyon from First to Last between them provide extensive coverage. The latter is claimed to contain[27] all of Runyon's stories (i.e. fiction) not included in Runyon on Broadway. In fact, there are two Broadway stories not included in either collection: "Maybe a Queen" and "Leopard's Spots", both collected in More Guys And Dolls (1950).

Runyon on Broadway contains the following stories, all of which are Broadway stories written in Runyonese:

Runyon from First to Last includes the following stories and sketches:

"Broadway's New York had a crisis each week, though the streets had a rose-tinged aura", wrote radio historian John Dunning. "The sad shows then were all the sadder; plays like For a Pal had a special poignance. The bulk of Runyon's work had been untapped by radio, and the well was deep."[32]:189

Mike McShane told Runyon stories as monologues on British TV in 1994, and an accompanying book was released, both called Broadway Stories.