Dan Davis Blocker (December 10, 1928 – May 13, 1972) was an American television actor and Korean War veteran. He is best remembered for his role as Hoss Cartwright in the NBC western television series Bonanza.

Blocker was born Bobby Dan Davis Blocker in De Kalb in Bowie County in northeastern Texas, son of Ora Shack Blocker (1895–1960) and his wife Mary Davis Blocker (1901–1998). The family moved to O'Donnell, south of Lubbock in West Texas, where they operated a store. 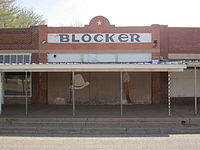 The former Blocker Store is now an abandoned building in downtown O'Donnell.

As a boy he attended Texas Military Institute, and in 1946 played football at Baptist-affiliated Hardin-Simmons University in Abilene, Texas. In 1947, he transferred to and later graduated from Sul Ross State Teacher's College in Alpine, where he was a star football player and then went on to earn a master's degree in the dramatic arts.

Blocker was a high school English and drama teacher in Sonora, Texas; a sixth-grade teacher and coach at Eddy Elementary School in Carlsbad, New Mexico; and finally, a teacher in California. He had worked as a rodeo performer and as a bouncer in a beer bar while a student. He is remembered from his school days for his size of 6 ft 4 in (1.93 m) and weight of 300 pounds (140 kilograms; 21 stone 6 pounds), and for being good-natured despite his intimidating size.

Blocker was drafted into the United States Army during the Korean War. He had basic training at Fort Polk, Louisiana. He served as an infantry sergeant in F Company, 2nd Battalion, 179th Infantry Regiment, 45th Infantry Division in Korea, December 1951 to August 1952. He received a Purple Heart for wounds in combat according to the June/July 2013 issue of VFW Magazine.[1][2] 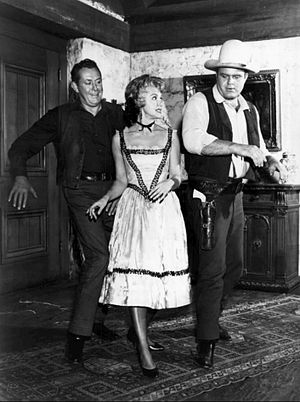 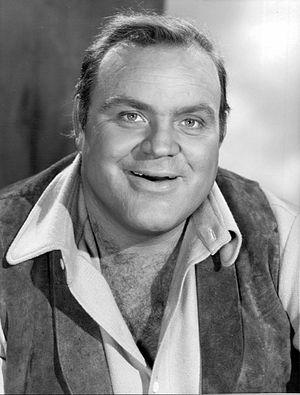 In 1957, Blocker appeared in a Three Stooges short, Outer Space Jitters, having portrayed the part of "The Goon," billed as "Don Blocker". Dan Blocker made two appearances on the long-running Gunsmoke series: the first on August 25, 1956, in "Alarm at Pleasant Valley" and the second on October 18, 1958, in "Thoroughbreds". He also appeared in 1957 as Will in the episode, "A Time to Die" of the ABC/Warner Brothers western series, Colt .45, starring Wayde Preston.[3]

Blocker was cast in 1957 in episodes of the David Dortort-produced NBC series, The Restless Gun as a blacksmith and as a cattleman planning to take his hard-earned profit to return to his family land in his native Minnesota. That same year, he had at least two roles as a bartender in an episode of the syndicated western-themed crime drama Sheriff of Cochise, starring John Bromfield and in the film, Gunsight Ridge. Also in 1957, he appeared in an episode, "Land Beyond the Law", of Cheyenne, playing one of the outlaw minions (Pete). He also appeared in The Rifleman. In 1958, he played a prison guard and later had a recurring role as Tiny Budinger in the NBC western series Cimarron City, starring George Montgomery, John Smith, and Audrey Totter. He also was seen in "The Señorita Makes a Choice," a 1958 episode of Walt Disney's Zorro series.

In 1958, Blocker had a supporting role as Sergeant Broderick in "The Dora Gray Story" on NBC's Wagon Train, with Linda Darnell in the title role and Mike Connors as Miles Borden, a corrupt United States Army lieutenant at an isolated western fort.[4] That same year, he appeared in "Stagecoach Episode" of the NBC western, Jefferson Drum, starring Jeff Richards.

Blocker was cast as bearded poker-playing rodeo performer, Cloudy Sims, in the 1958 episode "Rodeo" on the David Janssen crime drama, Richard Diamond, Private Detective. In the story line, a rodeo performer named Ed Murdock, portrayed by Lee Van Cleef, is murdered before he can make his final performance at the annual event in Madison Square Garden.[5]

In 1959, as Bonanza began its long network run, Blocker guest-starred in an episode of the Keenan Wynn and Bob Mathias NBC series, The Troubleshooters, an adventure program about unusual events surrounding an international construction company. Another 1959 role was as Del Pierce in "Johnny Yuma", the first episode of the ABC western series, The Rebel, starring Nick Adams. 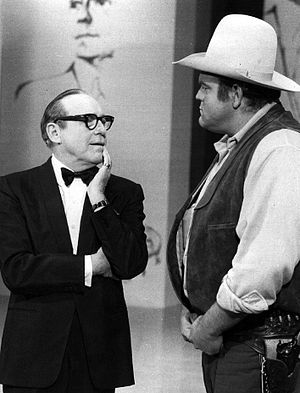 Blocker's big break also came in 1959, when he was cast as Eric "Hoss" Cartwright[6] on the long-running NBC television series Bonanza, and played the role until his death. Blocker said he portrayed the Hoss character with a Stephen Grellet excerpt in mind: "We shall pass this way on Earth but once, if there is any kindness we can show, or good act we can do, let us do it now, for we will never pass this way again."[7]

In 1968, Blocker starred with Frank Sinatra in the "Tony Rome" film sequel Lady In Cement.

Stanley Kubrick attempted to cast Blocker in his film Dr. Strangelove, after Peter Sellers elected not to add the role of Major T.J. "King" Kong to his multiple other roles, but according to the film's co-writer, Terry Southern, Blocker's agent rejected the script. The role subsequently went to Slim Pickens, who played the iconic scene of riding an atomic bomb down while waving his cowboy hat. In 1970, Blocker portrayed a love-shy galoot in Cockeyed Cowboys of Calico County, with Nanette Fabray as a love prospect and a supporting cast featuring Jim Backus, Jack Elam, Noah Beery, Jr., and Mickey Rooney. Blocker also appeared on NBC's The Flip Wilson Show comedy hour.

Director Robert Altman befriended Blocker while directing episodes of Bonanza. Years later, he cast Blocker as Roger Wade in The Long Goodbye, but Blocker died before filming began. The role went to Sterling Hayden, and the film was dedicated to Blocker.

Blocker started and received partial ownership in a successful chain of Ponderosa/Bonanza Steakhouse restaurants in exchange for serving (in character as Hoss) as their commercial spokesman and making personal appearances at franchises.[8] 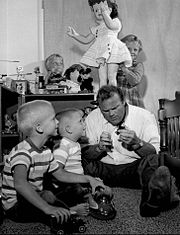 Blocker with his four children, circa 1960s.

Blocker is listed on the West Texas Walk of Fame in Lubbock.

Blocker was a Free Methodist.[9] He married Dolphia Parker, whom he had met while a student at Sul Ross State. All of their four children's names begin with a 'D': Hollywood actor Dirk Blocker, Hollywood producer David Blocker, and twin daughters Debra Lee (artist) and Danna Lynn. David Blocker won a 1998 Emmy for producing "Don King: Only in America."

Blocker was among Hollywood celebrities who supported Pat Brown's re-election in 1966 as governor of California against Ronald W. Reagan. In 1968, Blocker backed then-U.S. Senator Eugene J. McCarthy of Minnesota for the Democratic presidential nomination.[7] Blocker later supported the eventual Democratic Party nominee, Vice President Hubert H. Humphrey, also of Minnesota, for the presidency against the Republican Richard M. Nixon. He kept a house in Inglewood, California, and commuted to NBC. His 6,000-square-foot (560 m2) Tudor-style mansion in the Hancock Park, Los Angeles area of Los Angeles is currently owned by Rob Zombie.

On the 2010 PBS special, "Pioneers of Television: Westerns", actor Mitch Vogel, who played the young brother Jamie Cartwright on Bonanza, said Blocker, "was so easy to get to know—the kind of guy you could go and have a beer with."

Blocker, a performance automobile fan, once owned a 1965 Chevrolet Chevelle SS396 "Z-16" (RPO Z16 option) as Chevrolet was the commercial sponsor of the show. He also owned a 1965 Huffaker Genie MK10 race car, nicknamed the "Vinegaroon". The car was run by Nickey Chevrolet in the 1965 and 1966 U.S. Road Racing Championship series, as well as the 1966 Can-Am championship.[10]

On May 13, 1972, Blocker died in Los Angeles at age 43 of a pulmonary embolism following gall bladder surgery.[11] The writers of Bonanza took the unusual step of referencing a major character's death in the show's storyline that autumn. Bonanza lasted another season without Hoss, as the 14th and final season ended on January 16, 1973. Blocker's remains are interred in a family plot in Woodsmen Cemetery, in DeKalb, Texas, although he had lived there only briefly. The common grave site is marked by a plain stone with the name "BLOCKER" engraved; three family members are buried beside him.

A "Dan Blocker Room" is on the second floor of the O'Donnell Heritage Museum in O'Donnell, Texas, where he was reared.

A photo of Blocker as Hoss appears on the cover of Lagwagon's 1995 release Hoss, also named for the character.