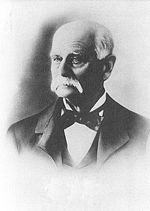 Photograph of Dan Emmett in his later years, taken from the belongings of Ben and Lew Snowden of Clinton, Knox County, Ohio.

Of Irish ancestry, Dan Emmett was born in Mount Vernon, Ohio, then a frontier region. Growing up with little formal education, he learned popular tunes from his musical mother, and taught himself to play the fiddle. At age 13, he became an apprentice printer and enlisted in the United States Army. He became an expert fifer and drummer at Jefferson Barracks, Missouri, and published his own Fifer’s and Drummer’s Guide in 1862 in cooperation with George G. Bruce. After receiving his discharge from the army on July 8, 1835, he joined a Cincinnati circus. In 1840–1842 he toured with Angevine and other circuses as a blackface banjoist and singer.[3]

In association with Billy Whitlock, Dick Pelham, and Frank Brower, he organized the Virginia Minstrels, which made their first appearance before a paying audience at the Chatham Theatre in New York City in 1843.[4]

Although blackface performance, in which white men painted their faces and hands black and impersonated caricatures of African-American men and women, was already an established performance mode at that time—Thomas D. Rice had created the character of Jim Crow nearly a decade earlier, and blackface had been widely popular ever since—Emmett's group is said to be the first to "black up" an entire band rather than one or two performers. The group's full-length blackface performance is generally considered to have been the first true minstrel show: previous blackface acts were usually either an entr'acte for a play or one of many acts in a comic variety show.

Emmett is traditionally credited with writing the famous song "Dixie". The story that he related about its composition varied each time he told it, but the main points were that he composed the song in New York City while a member of Bryant's Minstrels. The song was first performed by Emmett and the Bryants at Mechanics' Hall in New York City on April 4, 1859. The song became a runaway hit, especially in the South, and the piece for which Emmett was most well known. Emmett himself reportedly told a fellow minstrel that "If I had known to what use they [Southerners] were going to put my song, I will be damned if I'd have written it."[5] After the South began using his song as a rallying call, Emmett wrote the fife and drum manual for the Union Army. Emmett's song was a favorite of President Abraham Lincoln, who said after the war ended in 1865, "I have always thought that 'Dixie' was one of the best tunes I ever heard. I had heard our adversaries had attempted to appropriate it. I insisted yesterday that we had fairly captured it."[6]

Another writer named William Shakespeare Hays (1837–1907) (pen name: Will S. Hays), claimed to be its true author. Members of the Snowden Family of Knox County, Ohio, have also been named as writers of the song.

After a tour that was notably successful in the South, Emmett retired to his hometown of Mount Vernon in 1888[7] where he died on June 28, 1904, aged 88 years. From 1893 to the time of his death, he was aided by a weekly allowance from the Actors Fund of America. Emmett was inducted into the Songwriters Hall of Fame in 1970. A biographical film of his life was produced in 1943, titled Dixie. Starring Bing Crosby and Dorothy Lamour, it is a musical directed by A. Edward Sutherland.

Numerous schools, businesses, and other institutions in Mount Vernon, Ohio, are named after Emmett. The official memorial to him is a large boulder with a placard attached located in front of the Knox County Historical Museum.[8]

Emmett published at least 30 songs between 1843 and 1865, most of which are banjo tunes or walk-arounds. Between 1859 and 1869, he composed another 25 tunes that are in manuscript at the Ohio Historical Society, in Columbus, Ohio.[9]