Daniel Kahikina Akaka (/əˈkɑːkə/;[3] born September 11, 1924) is an American politician who was a United States Senator from Hawaii from 1990 to 2013. A member of the Democratic Party, Akaka was the first U.S. Senator of Native Hawaiian ancestry.[4]

Born in Honolulu, he served in the U.S. Army Corps of Engineers during World War II. He attended the University of Hawaii, where he received his bachelor's and master's degrees. Originally a high school teacher, he went on to serve as a principal for six years. In 1969, he was hired by the Department of Education as a chief program planner. In the 1970s, he served in various governmental positions. He was first elected to the United States House of Representatives in 1976 to represent Hawaii's Second Congressional District, and he served for 13 years. In 1990, he was appointed to the U.S. Senate to succeed the deceased Spark Matsunaga. Akaka would later be re-elected to three full terms. In March 2011, he announced that he would not run for re-election in 2012.[5] After fellow senator Daniel Inouye died on December 17, 2012, Akaka became the state's senior senator, and remained so briefly until he left office on January 3, 2013. He was succeeded by fellow Democrat Mazie Hirono.

Daniel Kahikina Akaka (Chinese: 李碩; pinyin: Lǐ Shuò[citation needed]) was born in Honolulu, the son of Annie (née Kahoa) and Kahikina Akaka. His paternal grandfather was born in China, and his other grandparents were of Native Hawaiian descent.[6][7] His brother was Rev. Abraham Akaka. He served from 1945 to 1947.[2] During World War II he served in the U.S. Army Corps of Engineers, including service on Saipan and Tinian. He worked as a welder and a mechanic and spent his final months of the war as a first mate on the vessel Morning Star.

Entering college (funded by the G.I. Bill), he earned a bachelor of education in 1952 from the University of Hawaii. He later received a master of education from the same school in 1966. He worked as a high school teacher in Honolulu from 1953 until 1960, when he was then hired as a vice principal. In 1963, he became head principal.

In 1969, he was hired by the Department of Health, Education and Welfare as a chief program planner. Akaka then continued working in government, holding positions as director of the Hawaii Office of Economic Opportunity, human resources assistant for state Governor George Ariyoshi, and director of the Progressive Neighborhoods Program.

Akaka was first elected to the United States House of Representatives in 1976 to represent Hawaii's 2nd congressional district, comprising all of the state outside the inner ring of Honolulu. He was reelected seven times, all by wide margins. 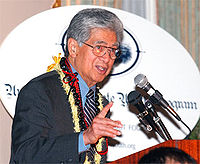 Akaka was appointed by Governor John Waihee to the U.S. Senate in April 1990 to serve temporarily after the death of Senator Spark Matsunaga, and sworn into office on May 16, 1990. In November of the same year, he was elected to complete the remaining four years of Matsunaga's unexpired term, defeating Congresswoman Pat Saiki with 53 percent of the vote. He was re-elected in 1994 for a full six-year term with over 70% of the popular vote. He was reelected almost as easily in 2000. For the 2006 election, he overcame a strong primary challenge from Congressman Ed Case, then won a third full term with 61 percent of the vote. Akaka was one of two senators in the 112th Congress who were elected to the Senate multiple times after being appointed.

Since 2000, Akaka has sponsored legislation, known as the Akaka Bill, to afford sovereignty to native Hawaiians. In 2005, Akaka acknowledged in an interview with NPR that the Akaka Bill could eventually result in outright independence.[8]

The Akaka Bill has been supported as a means of restoring Hawaiian self-determination lost with the 1893 overthrow of the Kingdom of Hawaii,[9] and would include giving up the ability to sue for sovereignty in federal courts in exchange for recognition by the federal government (but would not block sovereignty claims made under international law.)[10] The bill has been criticized as discriminating on the basis on ethnic origin in that only Native Hawaiians would be permitted to participate in the governing entity that the bill would establish.[11]

In April 2006, he was selected by Time as one of America's Five Worst Senators. The article criticized him for mainly authoring minor legislation, calling him "master of the minor resolution and the bill that dies in committee".[12]

Akaka voted against authorization of the use of military force against Iraq.[13]

In February 2009, a bill was authored in the Philippine House of Representatives by Rep. Antonio Diaz seeking to confer honorary Filipino citizenship on Akaka, Senators Daniel Inouye and Ted Stevens and Representative Bob Filner, for their role in securing the passage of benefits for Filipino World War II veterans.[14]

On March 2, 2011, Akaka announced he would not be running for re-election in the 2012 U.S. Senate elections.[5] He attended his final session in the Senate on December 12, 2012. He closed his speech with a traditional Hawaiian farewell, "a hui hou" (until we meet again).[15]

Akaka returned to the Senate on December 27, 2012 to introduce the new junior senator, Brian Schatz, who had the previous day been appointed senator in place of the recently deceased Daniel Inouye.